WARSAW, Poland (AP) — The presidents of Germany and Poland opened daylong observances of the 80th anniversary of the start of World War II on Sunday with a ceremony filled with the spirit of reconciliation and Germany's humility in the face of suffering it inflicted during the war.

The ceremony was held in Wielun, a central Polish town that was the first target of Nazi Germany's deadly bombings.

German President Frank-Walter Steinmeier and Polish counterpart Andrzej Duda attended the observances, which started at 4:40 a.m., the exact hour that, according to survivors, the war's first bombs fell, killing civilians.

The presidents, local officials and residents, among them survivors of the bombings, observed a minute of silence in memory of an estimated 2,000 victims.

Speaking in German and Polish, Steinmeier asked for forgiveness.

"We are deeply grateful for Poland's hand extended in a gesture of forgiveness."

"As the president of Germany I want to assure you that we will not forget, we will always remember about this, we want to remember and we are taking this responsibility that our history has imposed on us," Steinmeier said.

Duda thanked Steinmeier for attending the painful anniversary and said it was a form of giving "moral satisfaction." 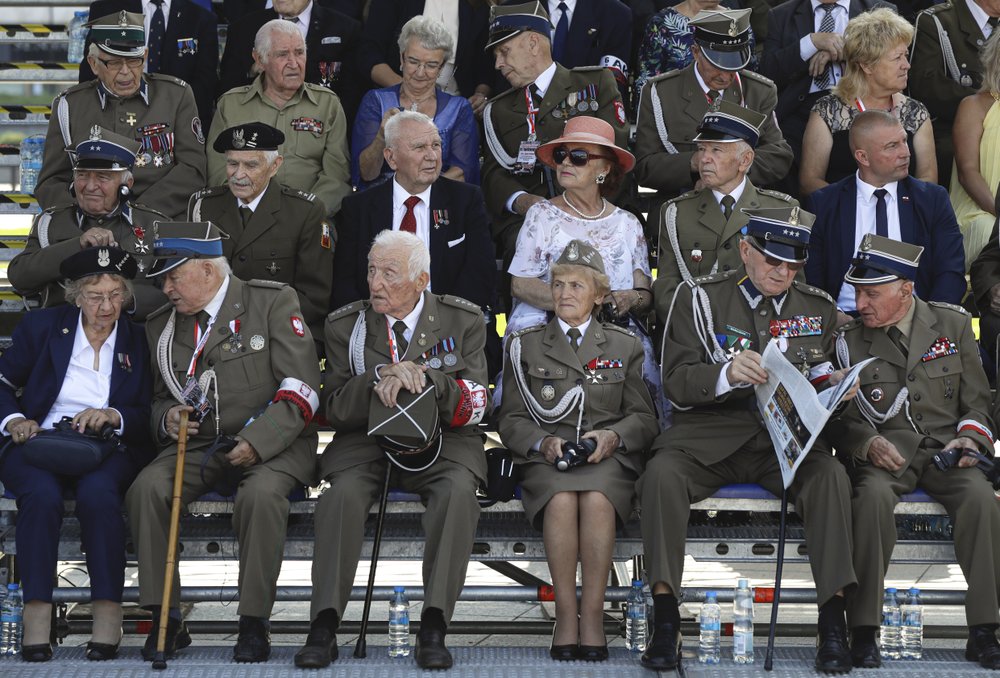 "Mr. President, thank you for your presence and your attitude," Duda said.

"I can see a man who has come with humility, a bowed head in order to pay homage ... to share the pain."

"Do you, those gathered here, think it is easy to come to the town that has been destroyed by the Germans? To look in the eyes of those who have survived?" Duda asked of those attending.

"Eighty years ago unspeakable horrors were unleashed on the Polish population, unspeakable horrors that we need to remember to prevent them from recurring in Europe," said Timmermans, the first vice president of the European Commission. "Can you imagine in this gathering that every fifth person sitting and standing here would suddenly disappear? This is what happened to the Polish nation at the hands of cruel Nazis who lost every understanding of humanity."

Poland remained under German occupation for more than five years and lost around 6 million citizens, and suffered damaged towns, villages and industry. More than half of those killed were Polish Jews who perished in the Holocaust.

"A special mention needs to be made of the Jewish Poles who were all but exterminated completely at the hands of the Nazis," Timmermans said. "We remember them here today."

At noon, U.S. Vice President Mike Pence, German Chancellor Angela Merkel along with the leader of Poland's ruling party, Jaroslaw Kaczynski, joined Steinmeier and Duda and many other leaders for the main event in Warsaw. President Donald Trump was originally scheduled to attend but canceled to deal with Hurricane Dorian.

The invasion of Poland by Nazi German troops on Sept. 1, 1939, marked the outbreak of World War II.

The war's threat is still present, as about 3,000 residents had to be evacuated in the western town of Boleslawiec to allow military experts to remove 37 unexploded wartime missiles.

Today Germany and Poland are allies in NATO and the EU and have a strong economic and trade partnership.