Thousands of Polish nationalists marched to the US Embassy in Warsaw Saturday, protesting that the US is putting pressure on Poland to compensate Jews whose families lost property during the Holocaust. 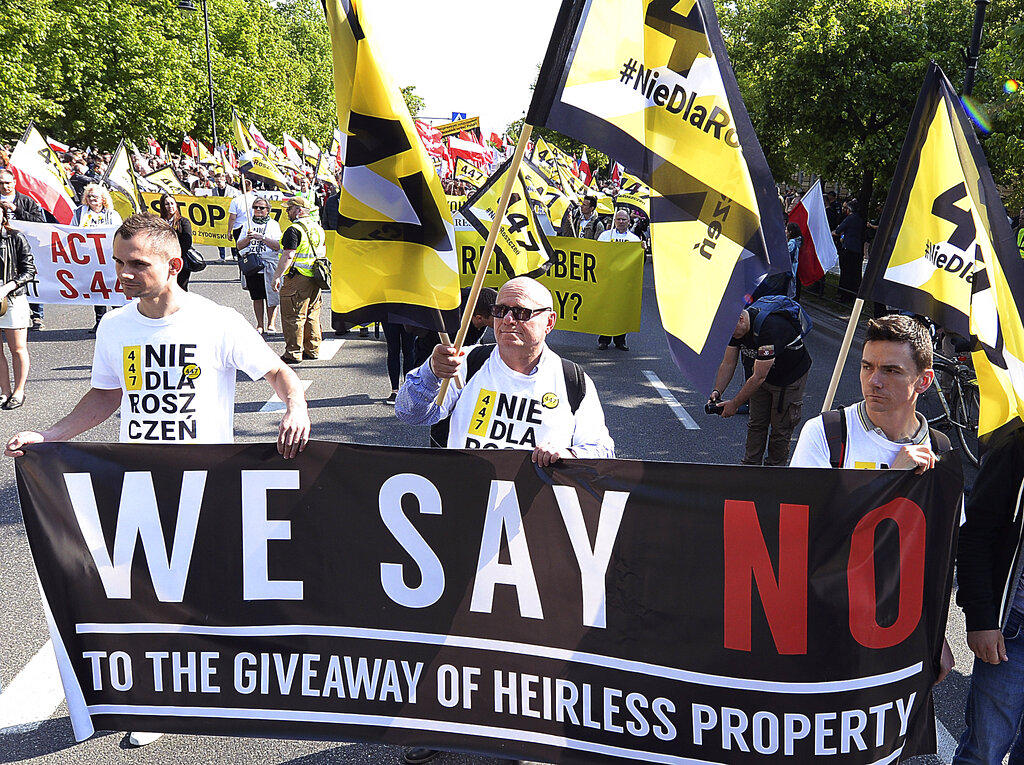 Thousands of Polish nationalists march to the US Embassy, in Warsaw, Poland, Saturday, May 11, 2019. (Photo: AP)

The protest took place amid a dramatic rise in anti-Semitic hate speech in public life in Poland and it appeared to be one of the largest anti-Jewish street demonstrations in recent times. It also comes as far-right groups are gaining in popularity, pressuring the conservative government to move further to the right.

Protesters, including far-right groups and their supporters, say the United States has no right to interfere in Polish affairs and that the US government is putting "Jewish interests" over the interests of Poland.

Poland was a major victim of Nazi Germany during World War II and those protesting say it is not fair to ask Poland to compensate Jewish victims when Poland has never received adequate compensation from Germany.

"Why should we have to pay money today when nobody gives us anything?" said 22-year-old Kamil Wencwel. "Americans only think about Jewish and not Polish interests."

The protesters shouted "No to claims!" and "This is Poland, not Polin," using the Hebrew word for Poland.

One couple wore matching T-shirts reading "Death to the enemies of the fatherland," while another man wore a shirt saying: "I will not apologize for Jedwabne" — a massacre of Jews by their Polish neighbors in 1941 under the German occupation.

Among those far-right politicians who led the march were Janusz Korwin-Mikke and Grzegorz Braun, who have joined forces in a far-right coalition standing in the elections to the European Parliament later this month. Stopping Jewish restitution claims has been one of their key priorities, along with fighting what they call pro-LGBT "propaganda." The movement is polling well with young Polish men.

Prime Minister Mateusz Morawiecki echoed the feelings of the protesters at a campaign rally Saturday, saying that it is Poles who deserve compensation.

Poland was the heartland of European Jewish life before the Holocaust, with most of the 3.3 million Polish Jews murdered by occupying Nazi German forces. Christian Poles were also targeted by the Germans, killed in massacres and in concentration camps.

Many Poles to this day have a feeling that their suffering has not been adequately acknowledged by the world, while that of Jewish suffering in the Holocaust has, creating what has often been called a "competition of victimhood."

Many of the properties of both Jews and non-Jews were destroyed during the war or were looted and later nationalized by the communist regime that followed.

The protests in Warsaw target US law S. 447, also known as the Justice for Uncompensated Survivors Today (or JUST) Act. It was signed into law by President Donald Trump last year and requires the State Department to report to Congress on the state of restitution of property stolen in the Holocaust in dozens of countries.

But Jewish organizations, particularly the World Jewish Restitution Organization, have been seeking compensation for Holocaust survivors and their families, considering compensation a matter of justice for a population that was subjected to genocide.

Poland is the only European Union country that hasn't passed laws regulating the compensation of looted or national property, and the head of the WJRO, Gideon Taylor, noted Saturday that such property "continues to benefit the Polish economy."

At least two US Confederate flags were visible at Saturday's protest, which began with a rally in front of the prime minister's office before the protesters walked to the US Embassy. Men in Native American headdress held a banner with a message pointing to what they see as US double standards: "USA, Practice 447 at home. Return stolen lands to the descendants of native tribes."

With pressure building on this issue, the US State Department's new envoy on anti-Semitism, Elan Carr, was in Warsaw this past week, telling leaders and media that the US is only urging Poland to fulfil a non-binding commitment it made in 2009 to act on the issue. He also said the US recognizes that Poland was a victim of the war and is not dictating how Warsaw regulates compensation.