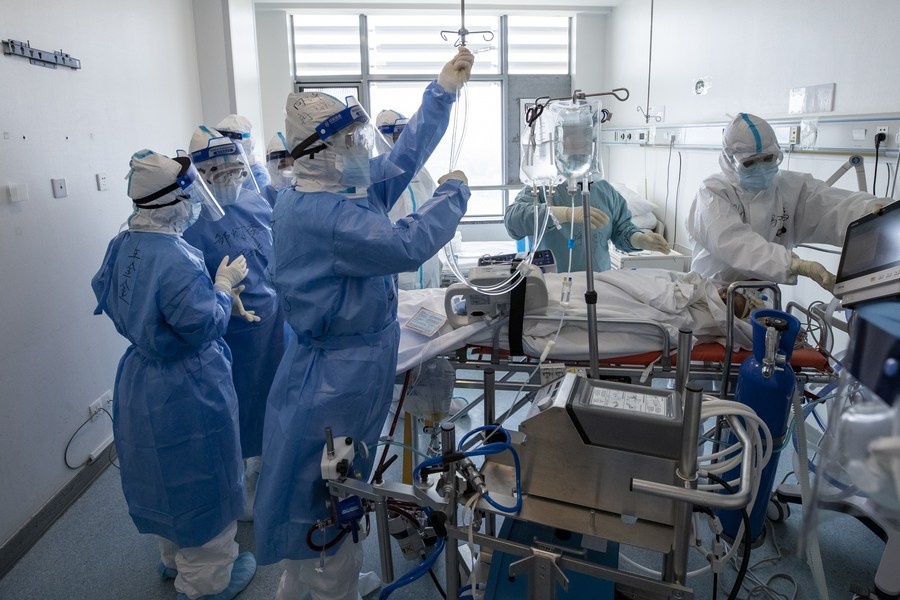 Medical workers prepare to transfer a COVID-19 patient in severe and critical condition who is undergoing Extracorporeal Membrane Oxygenation to the Intensive Care Unit ward at the Zhongfaxincheng campus of Tongji Hospital affiliated to Huazhong University of Science and Technology in Wuhan, Central China's Hubei province, April 12, 2020. (Photo: Xinhua)

Two main daily newspapers in Poland have recently posted opinion pieces about the success of China's fight against COVID-19, attributing the effective response mainly to science-guided measures, including prompt lockdowns and massive tests.

Both noted the low numbers of infections and deaths coming from China, with Gazeta Wyborcza saying that China's mortality rate stays at a low level among the countries having statistics.

"There is no doubt that the epidemic in China has been brought under control," said the paper, adding that currently there are a dozen or so new infections a day, mainly "imported".

The liberal paper and center-right publication Rzeczpospolita similarly noted that "China, compared to the USA or Europe, has almost complete control of the situation."

The opinion pieces of Polish mainstream media came at a time when a similar dire situation is spreading in Europe as the second wave attacked many European countries, which have started lockdowns or curfews.

Analyzing China's anti-pandemic battle, Rzeczpospolita attributed the Asian country's success to strict but well-planned lockdowns of cities of millions, which were lifted gradually over time, as well as extremely extensive testing schemes.

Scientists, Gazeta Wyborcza also noted, are respected by the country's leadership as well.

"The Chinese party lives in symbiosis with science and is proud of it," the daily said, stressing that it is "inconceivable" that Chinese leaders would publicly question the opinion of scientists or advise some questionable treatments like some Western leaders.

Life in China has by and large resumed its normality, Rzeczpospolita noted, saying that Chinese people are no longer "revolving around the coronavirus" but "traveling and going out to restaurants."