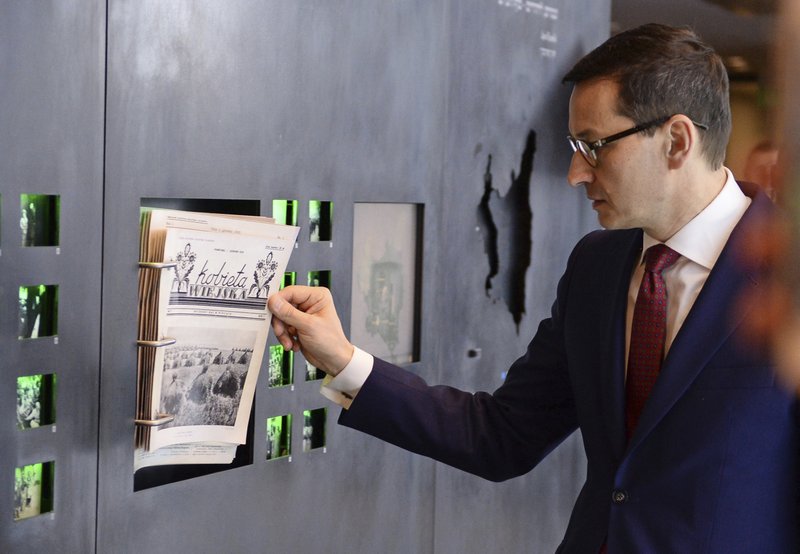 Polish Prime Minister Mateusz Morawiecki canceled his plans to attend a meeting of central European leaders in Israel starting Monday amid new tensions over how Polish behavior during the Holocaust is remembered and characterized.

It “is a signal that the historical truth is a fundamental issue for Poland, and the defense of the good name of Poland is and always will be decisive,” Deputy Foreign Minister Szymon Szynkowski vel Sek explained.

Netanyahu said during a Middle East conference hosted by the United States and Poland that “Poles cooperated with the Nazis” - wording suggesting that some Poles participated in killing Jews during the German occupation of Poland.

He was initially quoted by the Jerusalem Post as saying “the Poles,” which could be taken as blaming the entire Polish nation.

Both Netanyahu’s office and the newspaper said he was misquoted due to an editing error. The Polish government summoned the Israeli ambassador on Friday and later said it was not satisfied with the explanation of the Israeli leader being quoted incorrectly.

Netanyahu was supposed to meet with the leaders of the four central European countries known as the Visegrad Group — Poland, Hungary, the Czech Republic and Slovakia — during the two-day meeting in Israel.

Tomasz Lis, the editor of the Polish edition of Newsweek and a critic of the government, said Morawiecki obviously bowed out because with a general election later this year, the government “has to think about the far-right and anti-Semitic electorate”

Warsaw and Jerusalem had a major spat last year over a new Polish law that makes it illegal to blame the Polish nation for collaboration in the Holocaust.

Poland’s nationalist government has sought to focus on cases of heroism by Poles during Germany’s World War II occupation of the country. The law was seen by many as an attempt to quash research and discussion of any Poles who participated in decimating Poland’s Jewish population.

Germany occupied Poland in 1939, annexing part of it to Germany and directly governing the rest. Unlike other countries occupied by Germany, Poland did not have collaborationist government at the time. The prewar Polish government and military fled into exile, and an underground resistance army fought the Nazis inside the country.

Because of that history, Poles find references to Polish “collaboration” to be unfair and hurtful.

However, individual Poles did take part in killing Jews during and after the war. Many Holocaust survivors and their relatives carry painful memories of persecution at Polish hands. In Israel, there has been anger at what many there perceive to be Polish attempts today to whitewash that history.

The dispute last sparked an explosion of anti-Semitic hate speech in Poland, and there were signs of another spike in recent days.

“The worst of all is that a man cannot even hate Jews in response, because he knows that this is what the sons-of-bi_es” are going for,” a prominent host on public broadcaster TVP, Rafal Ziemkiewicz, tweeted Saturday.

In the western city of Wroclaw, the words “Jezus jest Krolem” (Jesus is King) were spray-painted on an exterior wall of a Jewish cemetery.