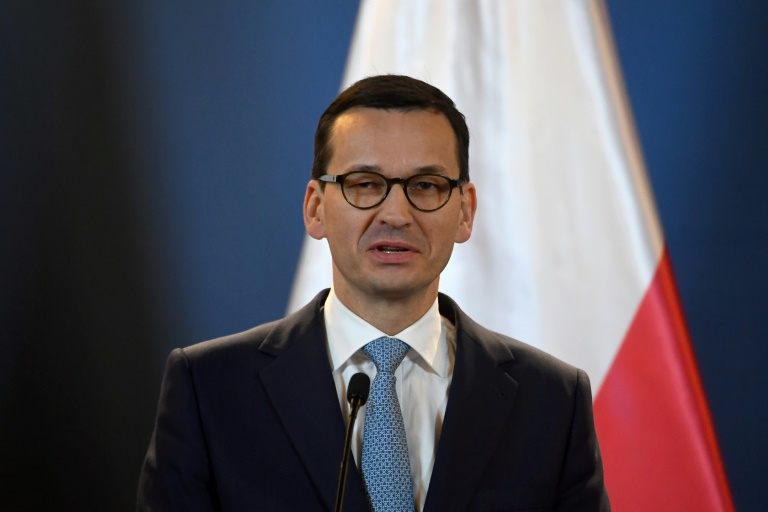 The prime minister is due to fly to Brussels for talks with European Commission President Jean-Claude Juncker later Tuesday. Photo: AFP

Poland's new right-wing Prime Minister Mateusz Morawiecki sacked his defence and foreign ministers in a major cabinet reshuffle on Tuesday, as he seeks to mend strained ties with the country's EU partners.

The prime minister was due in Brussels on Tuesday for talks with European Commission President Jean-Claude Juncker, focused on the EU's unprecedented disciplinary procedure against Warsaw over its controversial judicial reforms, which Brussels says threaten the rule of law.

Ahead of his departure, it was announced that defence minister Antoni Macierewicz and foreign minister Witold Waszczykowski lost their jobs along with environment minister Jan Szyszko, among others, at an official ceremony held at the presidential palace in Warsaw.

"We don't want to be a dogmatic, doctrinaire or extremist government; we want to be a government that draws together the economy and society, as well as the European and global dimensions with the local level," Morawiecki, who himself took office just last month, said as he greeted his new cabinet.

Warsaw-based political analyst Eryk Mystewicz described the reshuffle as "a new opening with the EU that gives a strong signal to Europe."

"Morawiecki, Czaputowicz are not people who can be accused of wanting a Polexit," Mystewicz said, adding that Czaputowicz as foreign minister "is a man from the centre who can give a new impetus to relations between Warsaw and Brussels."

In a major escalation against one of the bloc's biggest states, Brussels last month triggered article seven of the EU treaty over what it sees as "systemic threats" to the independence of the Polish judiciary from the nation's right-wing government.

Never before used against an EU member state, the proceedings can eventually lead to the "nuclear option" of the suspension of a country's voting rights within the bloc.

The EU gave Warsaw three months to remedy the situation, saying it could withdraw the measures if it did.

But just hours after the EU announcement, a defiant Polish president went ahead and signed the reforms into law and accused the bloc of "lying" about them.

Poland insists the reforms are aimed at banishing the last vestiges of communism from its justice system.

In excerpts of an interview aired Tuesday on German public television, Juncker said he does not want to threaten Warsaw with cutting financial aid.

"I am not in a belligerent mood, I want us to move together with the Poles towards a basic consensus," Junker said.

The row underlines growing east-west tensions within the European Union, with former Soviet bloc states like Poland and Hungary refusing to toe the Brussels line on several thorny issues, including judicial and media independence as well as immigration.

The EU has also taken Poland to court over its refusal to accept refugees under an EU quota system.

In his first interview after being sworn-in, foreign minister Czaputowicz told the right-leaning wPolityce weekly on Tuesday that "cooperation with the EU is a very important priority for Poland."

"This is also proven by Prime Minister Morawiecki's visit to Brussels today," he said, adding that "certainly relations with Mr Tusk should be seen in this broader EU context. Nothing prevents these relationships from getting better."

Up to now the the PiS government has had very rocky ties with EU President Donald Tusk, a former liberal Polish premier and PiS arch-rival.

Relations have been so tense that Poland was the only country to vote against his reelection as EU president in March.

Warsaw-based political scientist Stanislaw Mocek told AFP that the new cabinet was "aimed at improving the tarnished image of Poland abroad, especially in its relations with the EU."

He also said that the deep reshuffle made it appear that Morawiecki "had more freedom" in decision-making than his predecessor Beata Szydlo, who was regarded as working on the orders of the powerful PiS party leader Jaroslaw Kaczynski, widely seen as Poland's ultimate powerbroker.