Politicization of virus reflected in failings 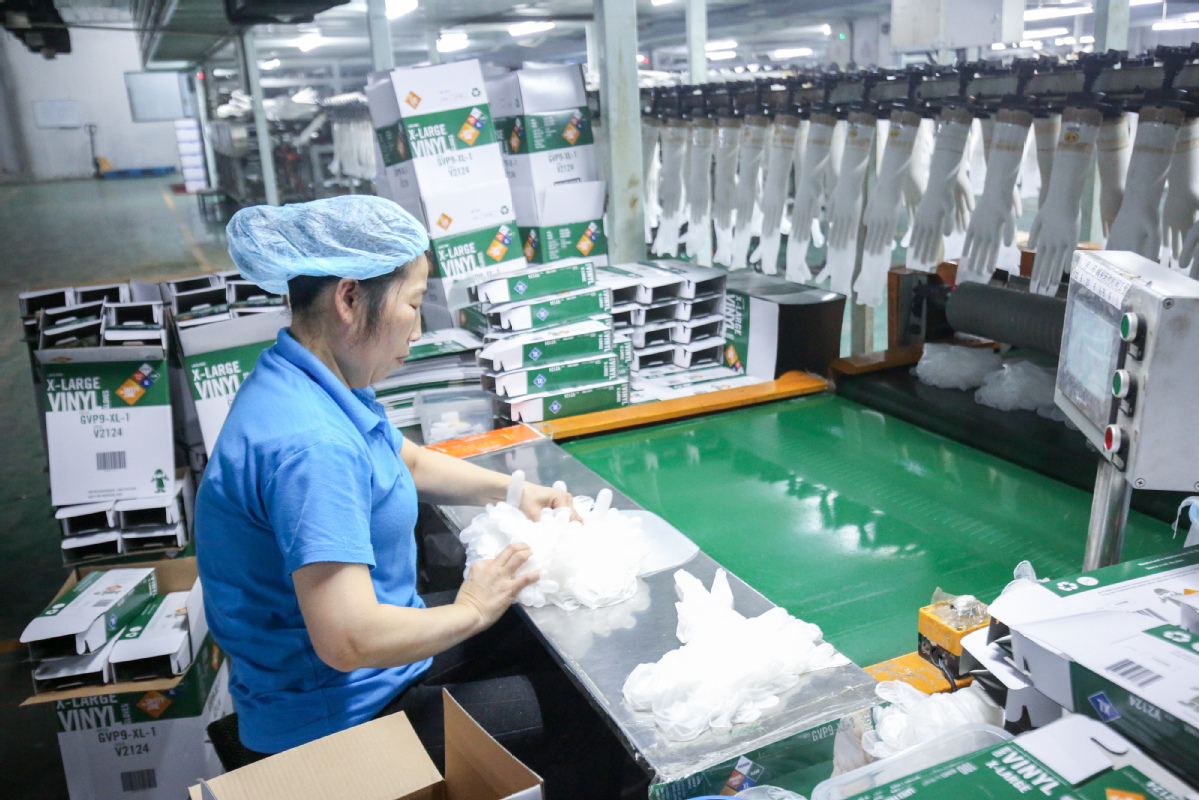 PVC patient examination gloves are made in Jiangsu province for export to the United States. (Photo: China Daily)

Despite its advanced medical research and healthcare system, the United States has been leading the world in COVID-19 fatalities and cases.

The country is now in the grip of the "third wave" of the pandemic, one which is much larger than the previous two and has hit the Midwest hardest of all.

The death toll is expected to continue rising, fueled by travel over the Christmas and New Year holidays and lax adherence to mask-wearing and other precautions.

Masks are seen globally as a key tool to contain COVID-19. In many other countries, mask mandates are becoming the norm, but the debate over masks continues in the US.

The top US health officials first told people they should not wear masks and then reversed their guidance. Public health experts have emphasized the importance of wearing masks, which US President Donald Trump has not fully supported.

Trump has long been reluctant to wear a mask in public. He also has refused to introduce a nationwide mandate, saying he wants people to have "a certain freedom".

Critics said the mask mandate in religious settings violated the free exercise of religion. The Supreme Court, with a strong 6-3 conservative majority, has sided with the religious groups against COVID-19-related restrictions in New York, Colorado and New Jersey.

Tensions over mask requirements have led to violence in some states. A store security guard in Michigan was shot dead by a customer whose family was told they needed to wear masks to enter the store.

Anti-mask protests have continued across the country for months.

Local health officials in California, South Dakota and other states were harassed and threatened for issuing mask mandates. Some cities had to reverse their mask orders or abruptly ended public health meetings under the pressure of anti-mask protests.

State and local governments have varied widely on implementation of mask rules. California was the first to order a statewide mask mandate in June, with many states following suit.

There are still 12 states though with no statewide mask requirement such as Arizona, Florida, Mississippi and South Dakota.

The Trump administration has been criticized for its inadequate response to the pandemic. The president himself repeatedly downplayed the virus and often contradicted public health experts in their grave warnings about the disease.

Experts said politicization of the pandemic is the reason behind people's resistance to public health measures such as wearing masks.

The misinformation also leads many US citizens to believe that COVID-19 is "a hoax" or "just another flu". Some patients dying of COVID-19 still think the disease is not real, said several nurses who turned to social media to express their frustration.

Another form of politicizing the coronavirus is the administration's interference with scientific institutions.

"From day one, this has been more political than any other pandemic that I've been involved with," Angela Rasmussen, a virologist at Columbia University, said in an interview with National Public Radio.

Trump and his Republican allies also used the terms "China virus "or "kung flu" in public speeches and rallies, a strategy that critics said was used to shift the blame for the pandemic to China. As a result, Asian Americans have experienced rising racism related to COVID-19.

Nine months after the WHO declared COVID-19 a global pandemic, the worldwide endeavor to create a safe and effective vaccine is beginning to bear fruit.

Following the Pfizer and BioNTech's vaccine, the US Food and Drug Administration has authorized another vaccine developed by Moderna and the National Institutes of Health.

As many as 40 million doses could be delivered by the end of the year, enough to vaccinate those in the designated top priority group, healthcare workers at high risk, and residents of nursing homes and long-term-care facilities.

With the government's total orders of 300 million doses, 150 million US citizens are expected to be vaccinated by mid-2021.

But just half say they want to get vaccinated, while about a quarter don't and the rest are unsure, a recent poll by The Associated Press-NORC Center for Public Health Research said.