A majority of Americans across racial and ethnic groups believe discrimination has worsened in the last year against Asian Americans, who became the target of attacks after being unfairly blamed for the coronavirus pandemic. 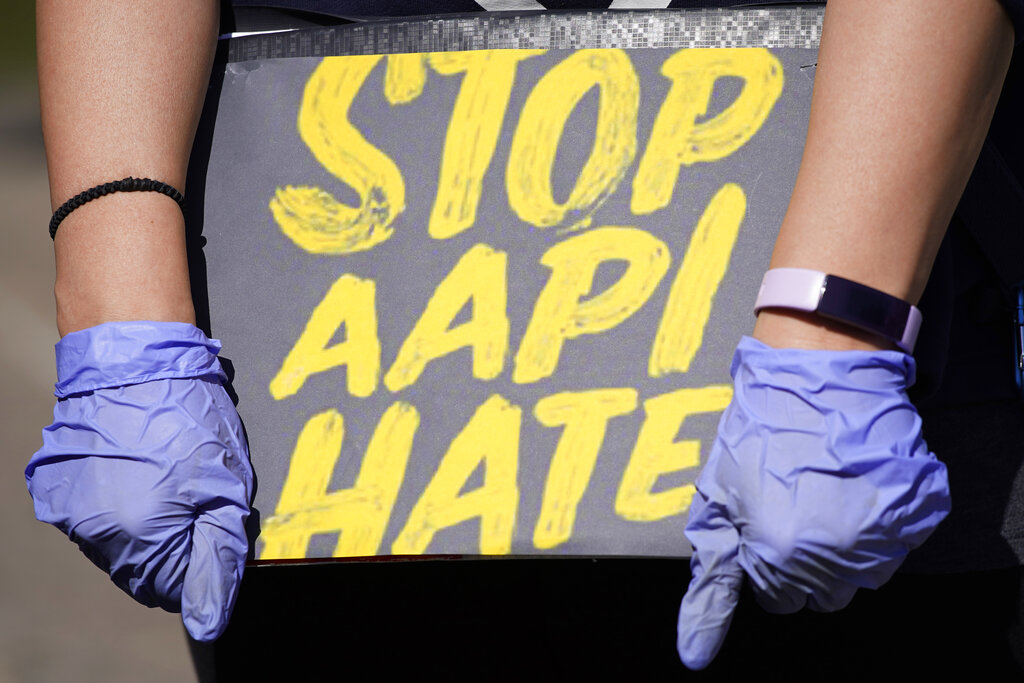 In this March 20, 2021 photo, woman holds a sign and attends a rally to support stop AAPI (Asian Americans and Pacific Islanders) hate at the Logan Square Monument in Chicago. (File photo: AP)

A poll from The Associated Press-NORC Center for Public Affairs Research finds 60% of Americans say discrimination against Asian Americans has swelled compared with a year ago, including 71% of Asian Americans, 66% of Black Americans, 59% of white Americans and 55% of Hispanic Americans.

Nearly half of Americans believe Asian Americans encounter “a great deal” or “quite a lot” of discrimination in the US today. The poll also finds about 6 in 10 Americans say racism in the US in general is a “very” or “extremely” serious problem. And a majority of Asian Americans say they feel unsafe in public because of their race.

Susan Lee, of Sacramento, California, said friends initiated conversations with her about racism as random attacks on Asians became more frequent, but the 72-year-old Chinese American noted a key difference between friends who were Asian and non-Asian.

“My non-Asian friends are probably more astonished that this is occurring," Lee said. "I think Chinese or ‘Asians' have always been looked at as a positive asset. I think they are puzzled by that situation.”

Barbara Canchola, 76, of El Paso, Texas, said she would have answered "not at all” if she had been asked pre-pandemic if Asian Americans face racism. Canchola, who identifies as Hispanic, said she associated anti-Asian discrimination as something way in the past like Japanese American internment camps during World War II.

“I really wouldn’t think they are facing any kind of discrimination because I happen to think they’re very well educated — most of them — and they don’t face that much scrutiny,” Canchola said. “However, ever since the pandemic began and it was labeled a ‘China thing,’ that’s where it all began."

She attributes her new outlook to all the television coverage “where the people are being assaulted on the street out of the blue.”

Renee Tajima-Pena, an Asian American Studies professor at the University of California, Los Angeles and co-producer of the PBS docuseries “Asian Americans,” isn't surprised some people have never thought of Asian Americans as victims. The dominant narrative has always been they are successful, don't speak up and, therefore, encounter little racism.

“The model minority myth is such a drug for Americans,” Tajima-Pena said.

Between March 2020 and this past March, more than 6,600 anti-Asian hate incidents have been documented by Stop AAPI Hate, a national reporting center. The encounters range from verbal harassment to attacks that ended fatally, including the March 16 Atlanta-area shootings that killed six Asian women.

The Center for the Study of Hate & Extremism at California State University, San Bernardino, found that Asian-targeted hate crimes in the largest US cities rose 145% in 2020 compared with 2019, even though hate crimes overall declined 6%. In the first quarter of this year, anti-Asian crimes reported to police in 16 major cities and counties jumped 164% from the same time period last year.

“That’s why people understand now the violence Asian Americans face,” Tajima-Pena said. “People couldn’t avoid it in the press or the national conversation. People are gathering data and talking about it.”

Fifty-seven percent of Asian Americans say they feel unsafe in public “often” or “sometimes” because of their race, similar to the share of Black Americans and higher than the share of Hispanic or white Americans. Because the survey was conducted in English and Spanish, it is representative of the English-speaking Asian American population but may not include those who primarily speak a language other than English.

Glendon Yuri-Sweetland, 34, of Brewer, Maine, blames former President Donald Trump for the increased discrimination against Asian Americans. Trump's constant referrals to COVID-19 as the “Chinese virus” and other racist terms are still embedded in a lot of minds, he said.

“As my husband would say, ‘It’s only stirring the pot,'” Yuri-Sweetland said. “But I think that even just having that platform for a while, our former president probably has had enough exposure to get his message out.”

Close to half of Americans are “very” or “extremely” concerned that incidents of violence targeting Asian Americans have increased because of the COVID-19 pandemic, according to the poll, including about two-thirds of Asian Americans.

Tajima-Pena believes the visibility of Asian Americans outside of their communities has fundamentally changed in the past year and it isn't going to fade. And videos like the one showing the brutal beating of a Filipino American woman in New York City as three people stood by and watched have undoubtedly contributed to the greater awareness.

“I think the narrative is shifting,” Tajima-Pena said. “It’s like 2020 was really the year where our response was ‘Stop AAPI hate'. ... The flip side of it is in 2021, people are really looking at solutions and solidarity.”