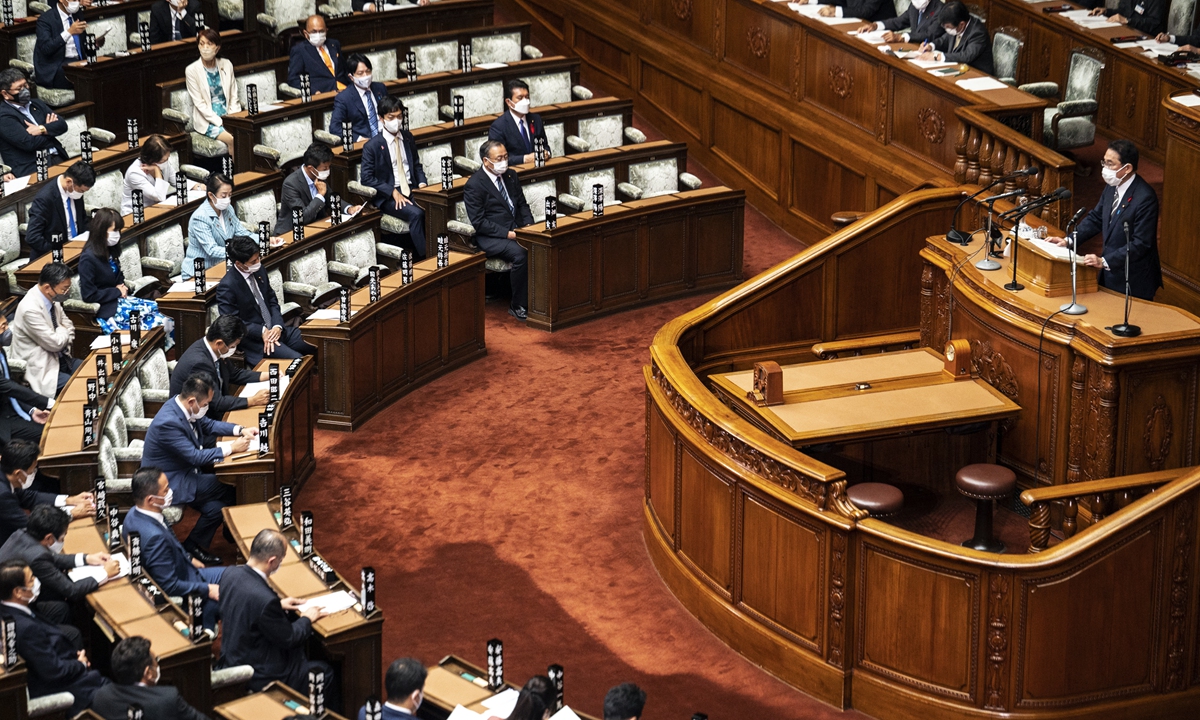 Japan's new Prime Minister Fumio Kishida delivers his first policy speech in Tokyo on Friday. Kishida said a stable bilateral relationship with China is important for the region and the world. Photo: AFP

Japan's Liberal Democratic Party will likely lose some seats in the October 31 lower house election, but the ruling coalition it forms with the Komeito party is expected to maintain a majority, several newspapers said on Thursday, citing their poll results.

Prime Minister Fumio Kishida aims to win a clear voter mandate to press ahead with his coronavirus response and steps to reinvigorate the pandemic-hit economy, but weak election results could turn him into another short-term premier.

Kishida took over from Yoshihide Suga as leader of the world's third-largest economy on October 4 after Suga's popularity sank as he struggled to contain a fifth wave of coronavirus infections.

A survey by the Asahi Shimbun daily showed 38 percent of those polled intended to vote for Kishida's Liberal Democratic Party (LDP), down from 41 percent in the previous survey conducted in earlier October.

In the latest survey, 7 percent of the respondents said they planned to vote for Komeito, up from 5 percent in the previous poll, while the percentage of those who intended to vote for the Constitutional Democratic Party of Japan (CDPJ), the largest opposition, was unchanged from the previous poll at 13 percent.

Other papers including the Mainichi and the Yomiuri dailies said the ruling bloc was likely to win a simple majority, or 233 seats or more, although the LDP is expected to suffer some setbacks.

The LDP clinched a strong victory in the previous lower house election in 2017 under Shinzo Abe, Japan's longest-serving premier.