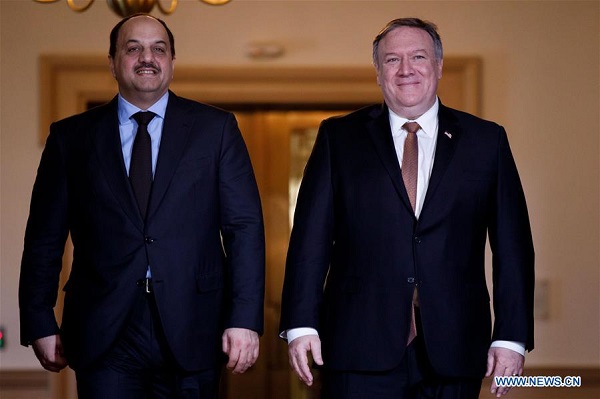 US Secretary of State Mike Pompeo (R) meets with Qatari Deputy Prime Minister and Minister of State for Defense Khalid Al-Attiyah at the US Department of State in Washington D.C., the United States, on Nov. 14, 2018. (Photo: Xinhua)

A statement issued by the State Department said that Pompeo and Qatari Deputy Prime Minister and Minister of State for Defense Khalid Al-Attiyah discussed working toward a Middle East Strategic Alliance that anchored by a united Gulf Cooperation Council (GCC), and reaffirmed their mutual interest in promoting regional security and stability.

The statement said the two discussed the upcoming bilateral strategic dialogue and the expansion of Al-Udeid Airbase, which stationed scores of US combat and supporting aircraft.

While the continuous blockade of Qatar by other regional countries might hinder the US regional alliance initiative, which Khalid Al-Attiyah on Tuesday termed a "concern" for him and part of the reason for his visit to the United States.

Another statement issued by the State Department said that Pompeo had a phone conversation on the same day with Bahraini Crown Prince Salman bin Hamad Al Khalifa over bilateral and regional issues.

The United States has a significant military presence in both Qatar and Bahrain. The former is the headquarters of US Air Force Central Command and the latter for US Naval Forces Central Command.

In June 2017, Saudi Arabia, Bahrain, the United Arab Emirates (UAE) and Egypt cut diplomatic ties with Qatar and jointly imposed a trade, land and air traffic embargo against the nation.

The four accused Qatar of supporting terrorism and destabilizing the region.

However, Doha has rejected the accusations, calling them "unjustified" and "baseless."

Despite the US calls for all parties concerned to solve their problem soon, UAE Minister of State for Foreign Affairs Anwar Gargash said in September that "there is still no solution to the spat in sight."