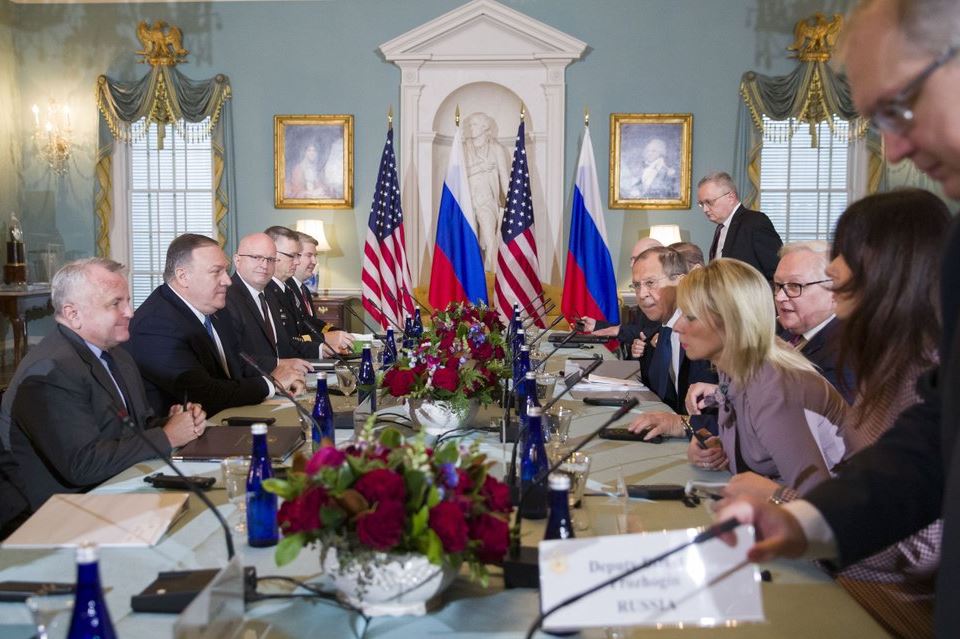 Secretary of State Mike Pompeo, second from left, is seated with Russian Foreign Minister Sergey Lavrov, fifth from right, before their meeting at the State Department, Tues. Dec. 10, 2019 in Washington. (Photo: AP)

Secretary of State Mike Pompeo said Tuesday that any foreign interference in American elections is “unacceptable” and warned Russia and others that the Trump administration will protect the integrity of the vote.

In wide-ranging talks with his Russian counterpart Sergey Lavrov that also included disputes over arms control agreements, Ukraine, Syria and Venezuela, Pompeo said at a joint news conference at the State Department that the administration would counter interference in elections past and future.

Before meeting with President Donald Trump at the White House, Lavrov repeated Russian denials of interference in the 2016 presidential election. He said the conclusion by the US intelligence community that Russia intervened in favor of Trump was “baseless.”

“I was clear it is unacceptable, and I made our expectations of Russia clear,” Pompeo said of election interference. “The Trump administration will always work to protect the integrity of our elections. Period.”

Lavrov derided the “wave of suspicions that has overcome Washington” related to election interference, renewing demands that evidence of such activity be given to Moscow. “All speculation about our alleged interference in domestic processes of the United States is baseless,” he said. “No one has given us this proof because it simply does not exist.”

“We don’t think there is any mistake about what transpired,” Pompeo said of the conclusion that Russia meddled in the 2016 election.

Lavrov’s visit to Washington, his first since May 2017, was overshadowed by the introduction of Ukraine-related impeachment articles by the House and Trump’s complaints about an internal Justice Department watchdog’s finding that the FBI was justified in opening an investigation into ties between Trump’s 2016 presidential campaign and Russia.

The two matters threatened to dwarf the diplomacy, which both sides had hoped could lead to an improvement in relations between Washington and Moscow.

After the news conference, Pompeo and Lavrov were to make the short trip to the White House, where they will meet with Trump. The last such meeting took place shortly after Trump fired FBI Director James Comey, a move that the Republican president later said was made because of the Russia investigation.

Earlier Tuesday, Trump attacked Comey’s replacement, Christopher Wray, whom he handpicked for the job, for agreeing with the inspector general’s conclusion

Meanwhile, House Democrats unveiled two articles of impeachment against Trump, accusing him of abusing his power by withholding military aid to Ukraine unless its new leader pledged to investigate the son of his political rival Joe Biden and obstructing Congress by refusing to cooperate with the inquiry. Trump has denied doing anything wrong.

Although the impeachment inquiry centers on Ukraine, which is fighting Russian-backed separatists in its east, Russia has been a major topic in the proceedings. Numerous witnesses told investigators that Trump’s defenders are echoing a Russian disinformation campaign by accusing Ukraine of interfering in the 2016 presidential election ahead of the 2020 election.

Ahead of the White House meeting, lawmakers urged Trump to warn Lavrov against a repeat of the 2016 interference.

Trump ally, Sen. Lindsey Graham, R-SC, said Trump should “inform them if you do anything in our election in 2020 their relationship is going to be over in a permanent way. Call Russia out for what they’re doing, inside of Syria, try to get them to stop being so disrupted in Syria.”

The chairman of the House Foreign Affairs Committee, Rep. Eliot Engel, D-NY, expressed doubt that Trump would demand accountability from the Russians.

“President Trump’s pattern of cozying up to autocrats and our adversaries harms American interests and undermines American leadership,” he said. “While dialogue with the Russians is important, especially for strategic stability and the future of arms control, I have no confidence in President Trump to defend our interests in these conversations.”

Lavrov arrived in Washington after a meeting in Paris on Monday between Russian President Vladimir Putin and Ukrainian President Volodymyr Zelenskiy, along with the French and German leaders, at which they agreed to revive the peace process on the bloody separatist conflict in eastern Ukraine and exchange all their prisoners.

But they failed to resolve crucial issues such as a timeline on local elections and control of the borders in the rebel-held region. Still, Russian and Ukrainian officials on Tuesday described the talks as a step toward peace and pledged to continue negotiations.