Pompeo hails 'progress' after talks with Kim Jong-Un in Pyongyang 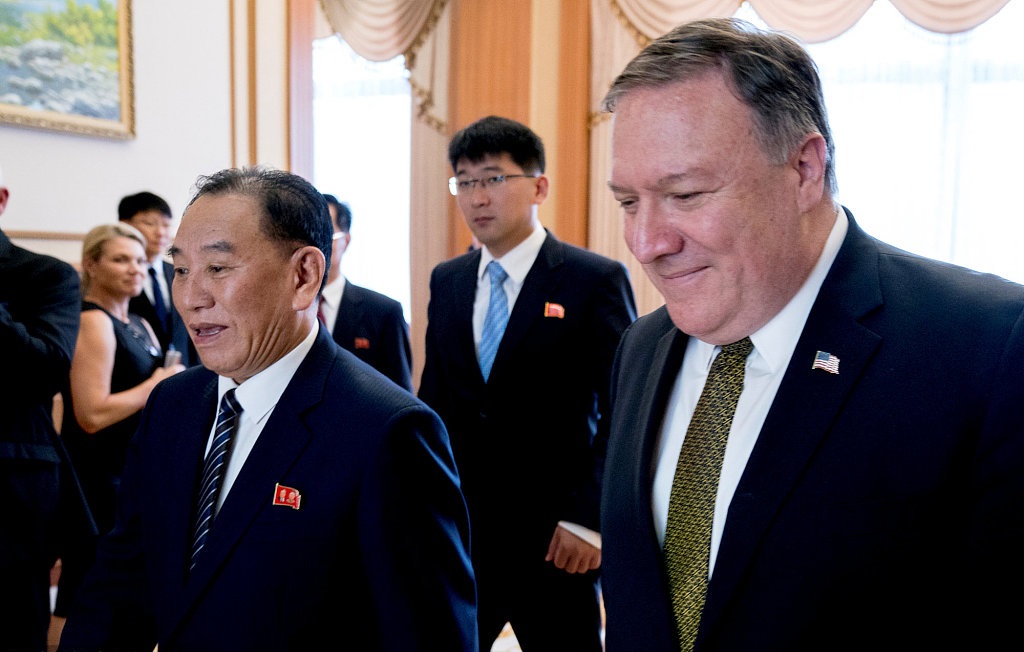 US Secretary of State Mike Pompeo hailed "progress" in talks with North Korean leader Kim Jong-Un in Pyongyang Sunday before landing in Seoul on a whirlwind diplomatic visit to the region.

The top US diplomat met with Kim for around two hours Sunday morning in the North's capital, where denuclearisation and a second US-North Korean summit were expected to be high on the agenda, before the pair shared a lunch together.

"Had a good trip to Pyongyang to meet with Chairman Kim," Pompeo tweeted. "We continue to make progress on agreements made at Singapore Summit. Thanks for hosting me and my team."

The visit was Pompeo's fourth to North Korea. US President Donald Trump met Kim in Singapore in June for the first-ever summit between the countries.

Speaking to Pompeo via an interpreter following the morning's talks, Kim praised their "nice meeting".

He added: "It's a very nice day that promises a good future ... for both countries."

After a previous visit to Pyongyang in July, Pompeo had said the two foes had made progress on key issues. But within hours of the Secretary of State departing the North released a statement condemning "gangster-like" demands from the US, raising questions over how much the two sides really saw eye to eye.

An official on Sunday's latest visit to Pyongyang with Pompeo said the trip was "better than the last time", but added: "It's going to be a long haul."

Details of Sunday's discussions were not immediately available. But prior to the meeting, Pompeo tweeted that he would "continue our work to fulfil the commitments made (by) POTUS and Chairman Kim," using an acronym to refer to US President Donald Trump.

On the flight to Tokyo, Pompeo said his aim was to "develop sufficient trust" between Washington and Pyongyang to inch towards peace.

"Then we are also going to set up the next summit," said Pompeo.

However, he played down expectations for a breakthrough.

"I doubt we will get it nailed but begin to develop options for both location and timing for when Chairman Kim will meet with the president again. Maybe we will get further than that," said the top US diplomat.

No sitting US president has ever visited North Korea, which according to human rights groups remains one of the most repressive countries on Earth.