WASHINGTON, Oct. 7 (Xinhua) -- US State Department said on Sunday that Secretary of State Mike Pompeo and the top leader of the Democratic People's Republic of Korea (DPRK), Kim Jong-un, have held a productive dialogue earlier in Pyongyang. 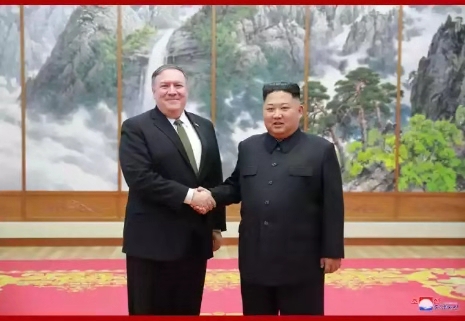 According to a statement issued by State Department spokesperson Heather Nauert, Pompeo "held productive discussions" with Kim on Sunday, when they "discussed the four elements contained in the US-DPRK Singapore Summit Joint Statement" signed by the two countries' top leaders.

"They also discussed the upcoming second summit between President Trump and Chairman Kim and refined options for the location and date of that next summit," the statement read.

Pompeo and Kim also agreed to instruct their respective working-level teams to meet soon to intensify discussions on the key remaining issues to deliver on the Singapore Summit Joint Statement.

In addition, Kim invited inspectors to visit the Punggye Ri nuclear test site to confirm that it has been irreversibly dismantled, the State Department said.

"President Trump looks forward to continuing to build upon the trust established with Chairman Kim in Singapore and anticipates meeting again soon," it added.

In a related development, the DPRK is demanding the United States take steps to secure Pyongyang's trust before its denuclearization.

"Without any trust in the US there will be no confidence in our national security and under such circumstances there is no way we will unilaterally disarm ourselves first," DPRK's Foreign Minister Ri Yong Ho told the UN General Assembly last week.

Pompeo was joined by US special representative on DPRK issues Stephen Biegun, and Kim was joined by Kim Yo Jong, first vice department director of the Central Committee of the ruling Worker's Party of Korea (WPK), the statement said.

This has been his third tour to the DPRK since he became the US secretary of state.

Pompeo met with Kim on Sunday and arrived in Seoul later. He will also travel to Beijing, according to both China and the United States.

While speaking with South Korean President Moon Jae-in before the media, Pompeo said that he and the DPRK side "had a good, productive conversation."

"There are many steps along the way and we took one of those today; it was another step forward. So this is, I think, a good outcome for all," he noted. "What we all hope will be the denuclearization and the change in the relationship here on the peninsula ...I'm confident together we can achieve the outcome that the world so desperately needs."

For his part, Moon said that "I dearly hope that your latest visit, as well as the upcoming US-North Korea summit, which I hope will be happening soon, will make an irreversible and decisive progress in terms of complete denuclearization on the Korean Peninsula as well as the peace process."