Pompeo 'lying through his teeth’ on Xinjiang affairs: Chinese FM 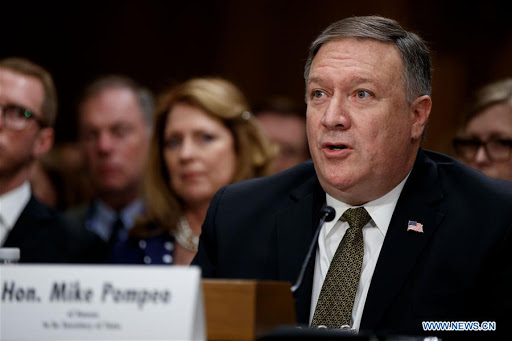 File photo of US Secretary of State Mike Pompeo

US Secretary of State Mike Pompeo, who claimed that China is trying to reduce Uygur births using IUDs, abortion and sterilization, is "lying through his teeth," said a spokesperson from China's Foreign Ministry (FM) on Tuesday.

Zhao Lijian, spokesperson of China's FM, further elaborated that China has always adopted preferential policies toward Uygur and other ethnic minority groups. The Uygur population in Xinjiang has increased from 5.55 million in 1978 to 11.68 million in 2018, accounting for 46.8 percent of the autonomous region's population and double the number of four decades ago.

Zhao said that if what Pompeo said is true, why has the population in Xinjiang soared in recent years? He added that looking at the US, its ethnic minority groups were mistreated and sidelined in society, and have had to endure long and systemic discrimination in all areas of life.

Pompeo made the comments after the Associated Press published an article claiming that China "is taking draconian measures to slash birth rates among Uygur and other minorities." The story was published in advance of its publication by German scholar Adrian Zenz.

Pompeo on Monday labeled the claims as "shocking" and "disturbing," and asked China to end these horrific practices.

Zhao rebuked the claims by citing the example of native Americans, who were slaughtered, isolated and faced genocide by the US government, who killed them in large numbers during its Westward Expansion.

The population of native Americans has dropped from 5 million in 1492 to 250,000, and this group of people now accounts for merely two percent of its former population, according to Zhao.

He further said that the number of African Americans who contracted the coronavirus in the US was five times that of white people, and the mortality rate also far exceeded that of their white peers, which revealed racial inequality in the US. The recent protests over George Floyd's death also exposed systemic discrimination in the US, and demands an urgent solution, said Zhao.

Zhao stressed that this is not the first time the US has cited Zenz's fabricated information, citing the revelation by US independent organization Greyzone that Zenz belongs to a far right organization in the US, and played an important role in US intelligence organizations' fabrication of stories about Xinjiang.

"We urge the US politicians such as Pompeo to take off their colored spectacles, and to abandon double standards, take their own racial discrimination problems seriously… and stop smearing China's domestic affairs," said Zhao.