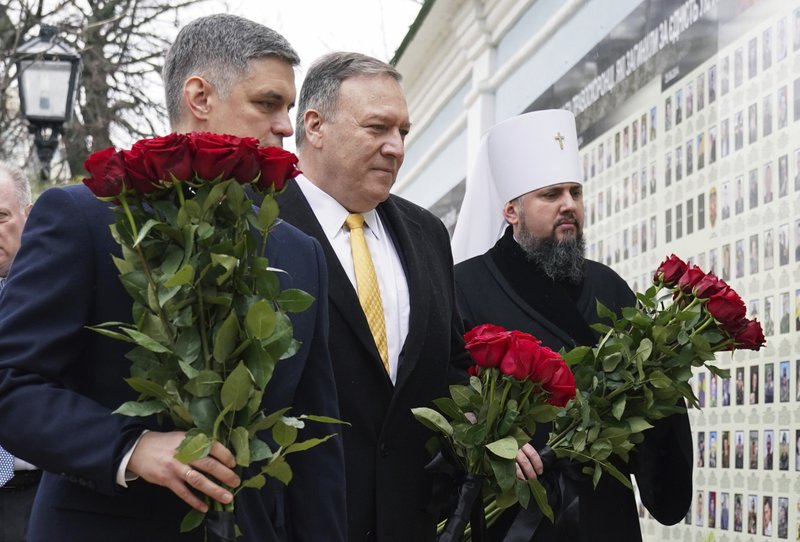 US Secretary of State Mike Pompeo, center, Ukrainian Foreign Minister Vadym Prystaiko, left, and Metropolitan Epifaniy, head of the Orthodox Church of Ukraine, take part in a ceremony at the memorial to Ukrainian soldiers, who were killed in a recent conflict in the country's eastern regions, in Kyiv, Ukraine, Friday Jan. 31, 2020. (Photo:  AP)

As the Senate lurched toward a vote to acquit President Donald Trump on impeachment charges, Secretary of State Mike Pompeo played clean-up in the country at the center of the inquiry on Friday.

Visiting Ukraine, Pompeo denied the main allegations that prompted the investigation, contradicting witness testimony that Trump withheld critical military aid and a coveted visit to the White House for the nation’s leader in exchange for a corruption investigation into a political rival.

In Kyiv, Pompeo also sought to distance himself from heated comments he reportedly made to a radio interviewer last weekend in which he questioned whether Americans actually care about Ukraine. He said Americans value and respect Ukraine as a “bulwark” against authoritarianism.

Pompeo met with Ukrainian President Volodymyr Zelenskiy just hours before the Senate was to cast crucial votes that could lead to an abrupt end and acquittal in Trump’s trial. Democrats accuse Trump of withholding American security aid as leverage to pressure Ukraine to investigate former Vice President Joe Biden and debunked theories of 2016 election interference. Several witnesses at House impeachment hearings testified about the link, but Pompeo, a loyal Trump ally, denied the allegations.

“It’s just simply not the case. We will find the right time, we will find the appropriate opportunity” for a visit by Zelenskiy, Pompeo said at a press conference after meeting with the Ukrainian leader. Pompeo had not been expected to announce a White House visit while in Ukraine.

Pompeo is the highest-ranking American official to visit Ukraine since the impeachment process began last year. That process started with revelations about a July 25 phone call between Zelenskiy and Trump.

Ukraine is eager for good relations with Trump as it depends heavily on US support to defend itself from Russian-backed separatists. Although the military assistance was put on hold, it was eventually released after a whistleblower complaint brought the July 25 call to light. The Trump administration has also supplied Ukraine with lethal defense equipment, including Javelin anti-tank weapons.

The furor over impeachment had, at the least, complicated discussions about Ukraine policy and had also caused strains between Pompeo and American diplomats, who expressed concerns he was not doing enough to support them during the controversy.

Yet Zelenskiy maintained impeachment had not had a negative effect on US-Ukraine relations and thanked the Trump administration for its financial and military support. And Pompeo sought to reassure diplomats at the embassy in Kyiv at a closed-door “meet and greet” event.

A senior US official in the meeting said Pompeo and Zelenskiy mainly discussed investment and infrastructure and that there was no talk of impeachment or corruption investigations. The official was not authorized to publicly discuss the private conversation and spoke on condition of anonymity.

Ukraine has been a delicate subject for Pompeo, who last weekend lashed out at a National Public Radio reporter for asking why he has not publicly defended the former US ambassador to Ukraine, Marie Yovanovitch. She was removed from her post after unsubstantiated allegations were made against her by Trump’s personal attorney, Rudolph Giuliani.

In the NPR interview, Pompeo took umbrage when asked if he owed Yovanovitch an apology, and maintained that he had defended all of his employees. In an angry encounter after the interview, he also questioned if Americans actually cared about Ukraine, according to NPR.

“The United States sees that the Ukrainian struggle for freedom, democracy and prosperity is a valiant one. Our commitment to support it will not waver,” he said.

“The United States understands that Ukraine is an important country. It’s not just the geographic heart of Europe, it’s a bulwark between freedom and authoritarianism in eastern Europe. Its fields feed the European continent and its pipelines keep Europe warm in the winter,” he said.

Zelenskiy, in turn, expressed hope that the US would more actively participate in resolving a separatist conflict in eastern Ukraine that has killed more than 14,000 people in the past five years. Zelenskiy also said he still wanted to meet Trump in DC as long it would be productive. “I am ready to go tomorrow,” he said.

Pompeo’s trip is a “hallmark visit that shows the United States has and will remain our key ally in defending territorial integrity and sovereignty,” Zelenskiy said. “For Ukraine, there is no doubt whatsoever in the state of the relationship.”

In addition to Zelenskiy, Pompeo met with Ukraine’s foreign and defense ministers as well as civic leaders, and toured several Ukrainian Orthodox churches.

Pompeo has been criticized for not publicly supporting Yovanovitch, her now-departed successor as chief of the Kyiv embassy, William Taylor, and other diplomats who testified before House impeachment investigators. Yovanovitch and Taylor have been attacked by Trump supporters and, in some cases, have been accused of disloyalty.

In his meeting with embassy staffers, Pompeo praised the leadership of the new acting ambassador and took questions that were described by several people present as polite and respectful. One official who attended was political officer David Holmes, who testified to the House impeachment panel that he overheard Trump inquire about a corruption probe on a phone call with the US ambassador to the European Union. It was not clear if he and Pompeo crossed paths or spoke.

Pompeo twice postponed earlier planned trips to Ukraine, most recently in early January when developments with Iran forced him to cancel.