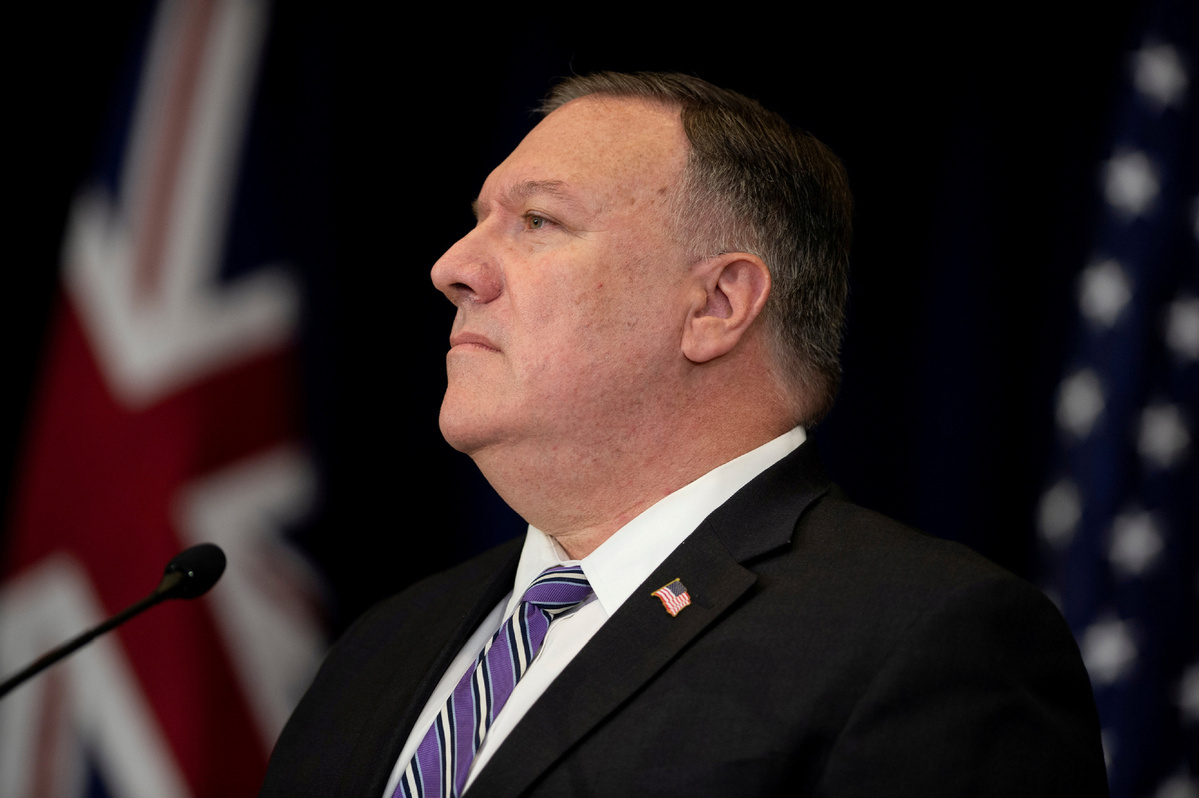 US Secretary of State Mike Pompeo listens during a news conference at the US Department of State following the 30th AUSMIN in Washington, DC July 28, 2020. (Photo: Agencies)

Charles Freeman, a former veteran diplomat who worked on multiple positions in the US State Department, told Xinhua in a recent interview that Pompeo's speech served domestic political agenda and his own political ambition, instead of foreign policy goals.

In a hostile speech at Richard Nixon Presidential Library and Museum last Thursday, Pompeo groundlessly slandered the domestic and foreign policies of Beijing and instigated "the free world" to stand up against China.

The speech was part of a broad anti-China campaign, and the United States is reestablishing hostility against China "as outlined in Pompeo's psychotic rant of last Thursday," Freeman said.

As evidenced by a series of similar hostile public remarks by National Security Advisor Robert O'Brien, FBI Director Christopher Wray and Attorney General William Barr, Freeman said the US "China policy is now made by notable anti-China elements, who will have agreed with the many falsehoods and distortions of Pompeo's rhetoric."

Standing in front of Nixon's birthplace, Pompeo asserted that US engagement policy with China, originated from former President Nixon and implemented by successive US administrations, was a failure because it did not change China domestically.

Such a claim was entirely against the history in the opinion of Freeman, who joined Nixon's path-breaking visit to China in 1972 as the principal interpreter.

"Those who don't understand what engagement achieved argue that it failed to change the Chinese political system, something it was never intended to do," Freeman emphasized.

The engagement was also not designed to change China's economic system, he noted. "But it did fundamentally, which was good for China, the United States, and the world."

"Overall, the maneuver was brilliant," he said. The US engagement policy with China bolstered the global balance and helped keep the peace, and cooperation between Washington and Beijing in the 1980s contributed significantly to the end of the Cold War.

"Apparently, Americans who don't see this are so nostalgic for the Cold War that they want to replicate it, this time with China," said Freeman.

Freeman also told Xinhua that some Americans were so unsatisfied with China's achievement that "rather than addressing their own country's competitive weaknesses, they are attempting to knock China back into government-managed trade and underdevelopment."

Those people imagined that "decoupling" would somehow restore the economic strengths America's ill-conceived policies have enfeebled, he said.

Freeman, who was US ambassador to Saudi Arabia in the late 1980s and later assistant secretary of defense, said Pompeo's speech was a domestic political speech rather than a foreign policy speech.

"Pompeo's purpose was to make a play for that part of Trump's constituency. He plans to run for president himself," he said.

Yorba Linda, where Richard Nixon Presidential Library and Museum located, is one of the most consistently Republican cities in Orange County, about 37 miles (about 59.5 km) southeast of downtown Los Angeles in California. Pompeo was born in Orange County.