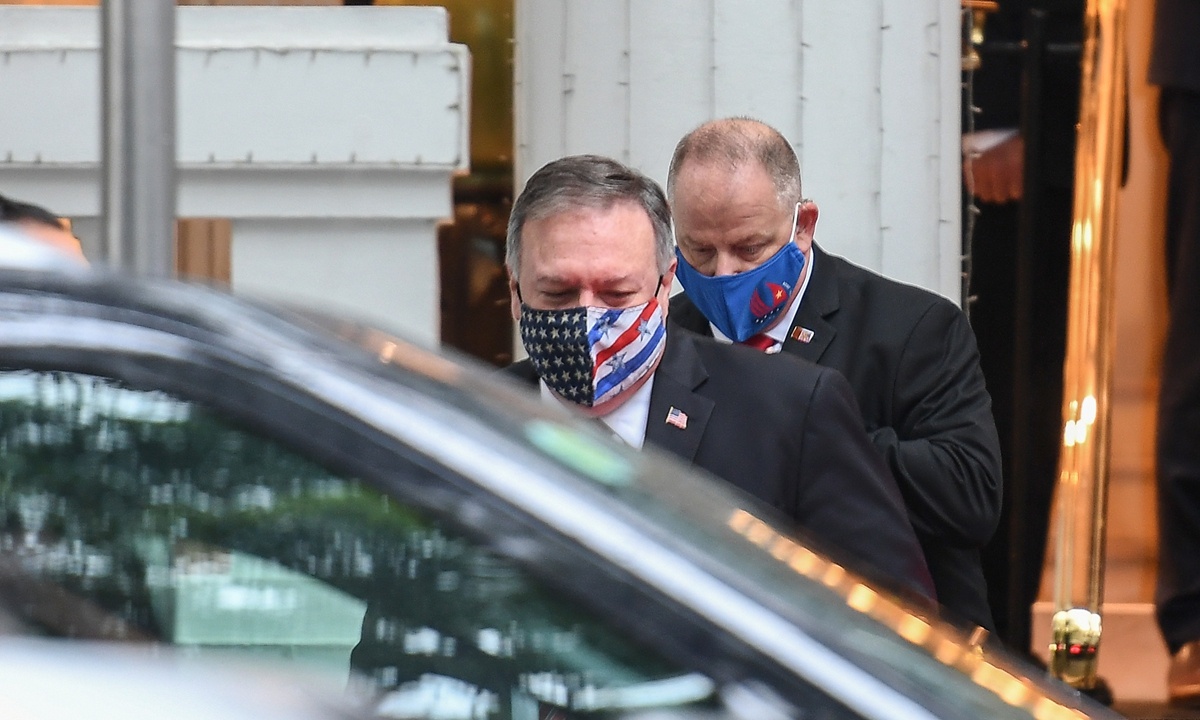 During Mike Pompeo's tenure as US Secretary of State, both US and international diplomacy have suffered severe damages. The Washington Post called Pompeo the "worst Secretary of State in history" in August, who deserves such a title. Pompeo is used to lying, breaking his own words and playing tricks, seriously damaging the reputation of the US. The world believes that US diplomacy has become chaotic, with no principle or bottom line. It's a train wreck.

International diplomacy has been severely affected during Pompeo's tenure. As US secretary of state, he played the role of a lobbyist in other countries to suppress a certain company, which is almost unprecedented.

For example, he has completely ignored the basic etiquette and professional ethics of a diplomat, frantically discrediting Chinese tech giant Huawei. Under such circumstances, other countries are also uncertain whether the US will use coercive methods when dealing with them. This has dragged the international diplomacy into a state of instability.

There are more than 70 days to go until the inauguration of the new US president on January 20. During this period, Pompeo and some other US politicians may show their final madness in policies toward China and the world. They are not willing to give in. This being the case, Pompeo may take even more drastic moves on the Iranian nuclear issue and US' China policy, further worsening bilateral relations with relevant countries, sabotaging world diplomacy and creating more obstacles for president-elect Joe Biden. They will create tensions to attract outside attention and claim to have made so-called diplomatic achievements. China needs to be vigilant against such risks.

Biden reportedly will form a diverse cabinet, and many people are looking forward to the changes that he will bring to US foreign diplomacy - especially China policy. During Pompeo's tenure, China-US high-level dialogues were not held regularly. The new US secretary of state in the upcoming Biden administration should restore dialogue mechanisms between China and the US, and discuss how to resolve the two countries' disputes on the basis of equal dialogue.

Besides, the new secretary of state should promote meetings between Chinese and American top leaders. Head-of-state diplomacy can always play a leading role in bilateral relations. Pompeo's successor will also need to make up for the damage done to China-US relations. For example, he or she will need to revoke some wrong policies (including the restrictions on diplomats and embassy issues) to create a good atmosphere for the two countries' ties.

The new secretary of state will also need to fix Pompeo's damage to US' alliance system and multilateralism. Biden has promised to rejoin the Paris Agreement. The new US administration may temporarily stop the trade war and tariffs on its allies, so as to lay the foundation for resuming normal trade relations with allies and partners. Washington may also reconsider the Transatlantic Trade and Investment Partnership, a proposed trade agreement between the EU, the US and others.

On security issues, Pompeo's successor may not pressure US' allies like the way Pomepo did. He or she is unlikely to ask allies to bear more military expenditures, but may choose to re-emphasize the role of NATO and security ties with US allies. After all, the security relationship is a cornerstone of US' alliance system. Without security agreements, the US' alliance system is totally fragile.

Pompeo's extreme anti-China and unilateral mind-set is not just a personal act. It also represents an extreme force in the Republican Party, and Pompeo is only a part of it. For a long time in the future, the Republican Party will still want to exacerbate its suppression on China in terms of ideology and other aspects. Thus, it is possible that there will be another Pompeo-like American politician in the future. If the Republican Party comes to power again, China-US relations may have to face another round of turbulence.