U.S. State Department said on Monday that Secretary of State Mike Pompeo spoke with his South Korean counterpart over phone on Sunday, discussing their engagements with the Democratic People's Republic of Korea (DPRK). 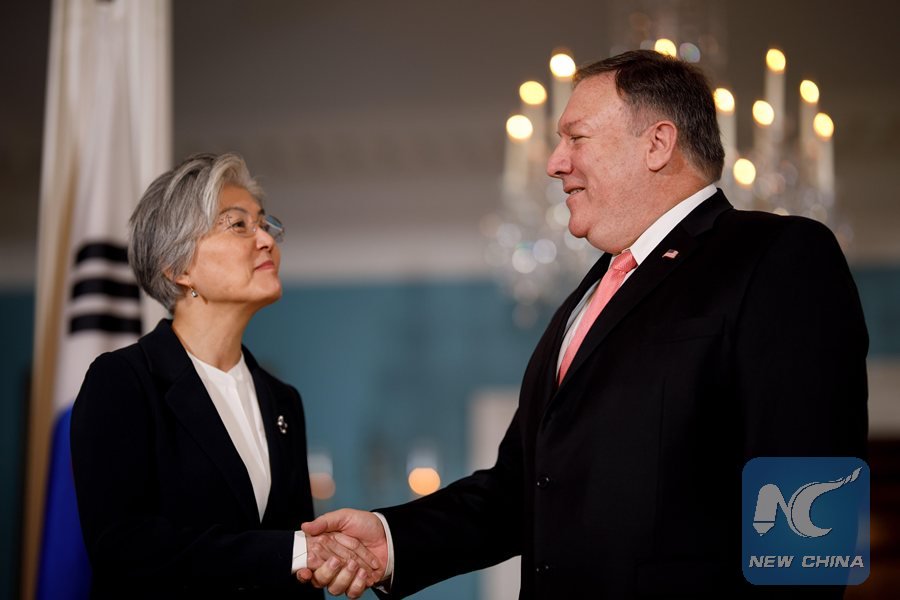 US Secretary of State Mike Pompeo (R) meets with South Korean Foreign Minister Kang Kyung-wha at the US Department of State in Washington DC, the United States, on Dec. 6, 2018. (File photo: Xinhua)

State Department deputy spokesperson Robert Palladino said in a statement that Pompeo and South Korean Foreign Minister Kang Kyung-wha updated each other on respective engagements with the DPRK.

The top diplomats of Seoul and Washington also reaffirmed their commitment to the alliance between the United States and South Korea, according to the statement.

The phone conversation between the two was made after Kim Yong Chol, vice chairman of the DPRK's ruling Korean Workers' Party Central Committee, met with Pompeo and President Donald Trump last Friday in Washington.

South Korean President Moon Jae-in on Monday positively expected the outcome of the second summit between Trump and Kim Jong Un, the top leader of the DPRK, stressing that South Korea should take this golden opportunity to peacefully resolve the nuclear issue of the Korean Peninsula.

The White House announced Friday that the second summit between Trump and Kim "will take place near the end of February."

"We've picked the country, but we'll be announcing it in the future," Trump told reporters at the White House on Saturday morning.
Cover image: Mike Pompeo, US secretary of state, right, shakes hands with Kang Kyung-wha, South Korea's foreign minister, during a photo opportunity at the State Department in Washington, DC, US, on Thursday, Dec. 6, 2018. (File photo: VCG)