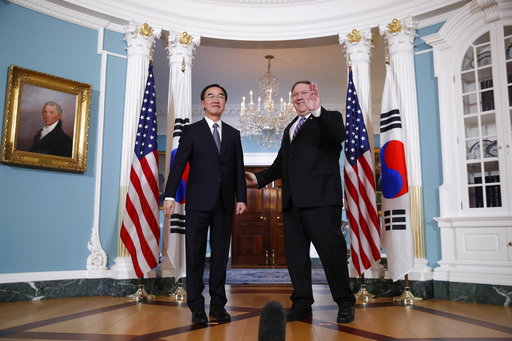 Pompeo and Cho "affirmed their commitment to close coordination" and "discussed ways to deepen coordination so that inter-Korean cooperation and progress on US-DPRK negotiations toward denuclearization remain aligned," according to a statement issued by State Department spokesperson Heather Nauert.

The official KCNA news agency of the the Democratic People's Republic of Korea (DPRK) reported earlier on Friday that Kim Jong-un, the country's top leader, visited the testing ground of the Academy of Defence Science and supervised the test of a newly developed ultramodern tactical weapon.

Speaking about the denuclearization of the Korean Peninsula in a press briefing on Thursday, Nauert said: "We have a long way to go. We believe in giving diplomacy a chance."

"When the President (Donald Trump) and Chairman Kim are next able to meet, whenever that does take place -- we think probably early in the next year -- we expect that those four elements of the Singapore summit will be addressed by the two leaders," she added.

The first-ever DPRK-US summit was held in Singapore on June 12. According to a joint statement signed by Trump and Kim, the United States would provide security guarantee to the DPRK in return for Pyongyang's commitment to denuclearization.