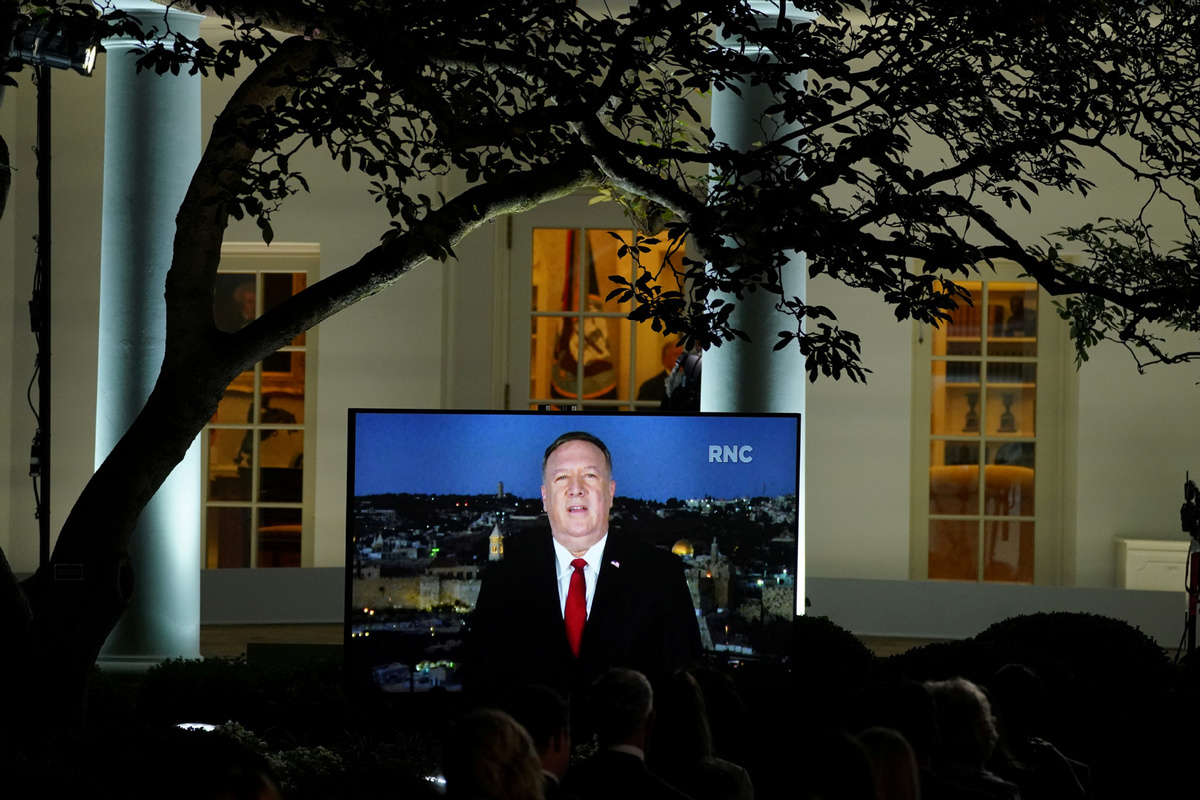 US Secretary of State Mike Pompeo is seen giving his pre-recorded address to the 2020 Republican National Convention from Israel on a monitor set up in the Rose Garden of the White House in Washington, US, Aug 25, 2020. [Photo/Agencies]

WASHINGTON－Joaquin Castro, a Democratic member of the US House of Representatives, said he had opened an investigation into Secretary of State Mike Pompeo's speech to the Republican National Convention, or RNC, on Tuesday.

In a letter to Deputy Secretary of State Stephen Biegun, Castro said: "It is highly unusual, and likely unprecedented, for a sitting secretary of state to speak at a partisan convention for either of the political parties. It appears that it may also be illegal."

In a recorded video from a Jerusalem rooftop during an official trip, Pompeo described on Tuesday what he called Trump's foreign policy successes, including the president's decision to move the US embassy in Israel to Jerusalem and his holding talks with the leadership of the Democratic People's Republic of Korea.

Castro, chairman of House Foreign Affairs panel's subcommittee on oversight and investigations, noted later on Tuesday that Pompeo's speech to the convention might violate the Hatch Act and State Department policies.

The Hatch Act is a federal law that prohibits employees in the executive branch of the federal government, except the president, vice-president and certain designated high-level officials, from engaging in some forms of political activities.

Castro said that Pompeo, who is on official travel in the Middle East, also broke the Foreign Affairs Manual, which prohibits State Department officials from engaging in partisan political activities abroad.

He wants Biegun to answer a series of questions by no later than Sept 1 and arrange a briefing for lawmakers by the same date.

Also on Tuesday, US first lady Melania Trump offered sympathy for victims of the coronavirus pandemic and a plea for racial understanding in a Republican convention speech aimed directly at female voters.

On the convention's second day, the speech's warm tone was out of step with a Republican gathering that featured harsh rhetoric about Democratic challenger Joe Biden and sometimes apocalyptic warnings about the dangers of Democratic governance.

Trump's wife acknowledged the pain of the pandemic in sharp contrast to most other speakers at the party's national convention, notably her husband, assailed by Democrats for his lack of solace during a US health crisis that has killed more than 178,000 people.

"I want to acknowledge the fact that since March, our lives have changed drastically," Melania Trump told a crowd seated in the White House Rose Garden, with the president in the front row. "My deepest sympathy goes out to everyone who has lost a loved one."

The first lady also reflected on the racial unrest that has swept the country in the months since the death in May of George Floyd under the knee of a white policeman in Minnesota.

"I urge people to come together in a civil manner so we can work and live up to our standard American ideals," she said.