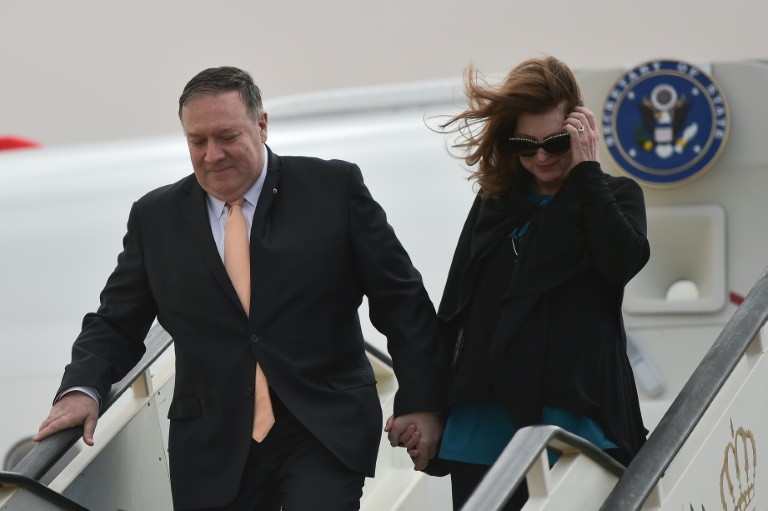 US Secretary of State Mike Pompeo and his wife Susan arrive in Amman at the start of a Middle East tour on January 8, 2019 (Photo: AFP)

US Secretary of State Mike Pompeo urged Middle East allies Tuesday to confront "significant threats" posed by Iran and jihadists as he visited a region shaken by Washington's surprise decision to withdraw from Syria.

The top US diplomat, in Jordan on the first leg of his longest trip since taking the post last year, said that the US troop pullout would not undermine the battle against the Islamic State group.

"The most significant threats to the region are Daesh and the Islamic revolution," Pompeo said at a news conference with Jordanian Foreign Minister Ayman Safadi, referring to IS and Iran.

Sustaining a regional coalition to counter Iran, the main enemy of US allies Saudi Arabia and Israel, is a major focus of Pompeo's tour of eight Arab capitals in as many days.

"The counter Iran revolution is a coalition as effective today as it was yesterday and I'm very hopeful that it will continue to be effective and even more effective tomorrow," he said.

"You'll see in the coming days and weeks we are redoubling all our diplomatic and commercial efforts to put real pressure on Iran".

Last year, Trump pulled out of an international accord negotiated under his predecessor Barack Obama on ending Iran's nuclear programme and has instead reimposed biting sanctions.

Pompeo has repeatedly called Iran "the world's largest state sponsor of terror," pointing to its targeting of domestic rivals in Europe and support of militant movements such as Lebanon's Hezbollah.

Iran's Foreign Minister Mohammad Javad Zarif swiftly hit back at the latest US broadsides, tweeting that the "pure obsession with Iran is more and more like the behaviour of persistently failing psychotic stalkers."

Pompeo's trip comes weeks after Trump announced that the United States would quickly pull its 2,000 soldiers out of Syria, declaring that IS -- also known as ISIS -- had been defeated.

His advisers have since been walking back his timeline, and Pompeo reassured Washington's allies in the region that the "battle continues".

"The president's decision to withdraw our folks from Syria in no way impacts our capacity to deliver on that," said the secretary of state, who later also met Jordan's King Abdullah II.

In a stark reminder of the lingering jihadist threat, IS fighters defending their last bastion killed 23 members of the US-backed Syrian Democratic Forces in eastern Syria, a war monitor reported.

IS was unable to hold on to the positions it attacked in the assault which began late Sunday and also left nine jihadists dead, the Britain-based Syrian Observatory for Human Rights said.

He will deliver an address on Middle East policy in Egypt, whose army chief turned president, Abdel Fattah al-Sisi, has been a key partner of Trump.

The Trump administration has cited Iran as a reason for maintaining a strong alliance with Saudi Arabia, despite the murder and dismemberment of dissident journalist Jamal Khashoggi inside the kingdom's Istanbul consulate in October.

One of the rare US partners to support Washington's withdrawal from Syria has been Turkey, whose president, Recep Tayyip Erdogan, spoke to Trump before the US leader's December 19 decision.

Pompeo, in an interview before his departure, said that Erdogan had "made a commitment" to Trump not to attack Washington's Kurdish allies who have fought IS in Syria.

That prompted a denial Tuesday from Erdogan's spokesman who said that "nobody should expect Turkey to provide assurances to a terror organisation".

White House national security adviser John Bolton held talks Tuesday in Ankara as tensions grew over his earlier comments that the US retreat was conditional on the safety of US-backed Kurdish fighters, considered terrorists by Turkey.

Erdogan branded his remarks "unacceptable" and a "grave mistake".

Turkey also urged the United States to take back all the weapons provided to Syrian Kurdish forces in the fight against IS, a presidential spokesman said.

"It is not possible to accept or swallow the message given by Bolton from Israel," Erdogan told his party's lawmakers in parliament.

Israel, which Bolton visited before Turkey, has privately worried that Trump's withdrawal from Syria would empower Iran, which along with Russia offers military backing to President Bashar al-Assad in the country's devastating civil war.