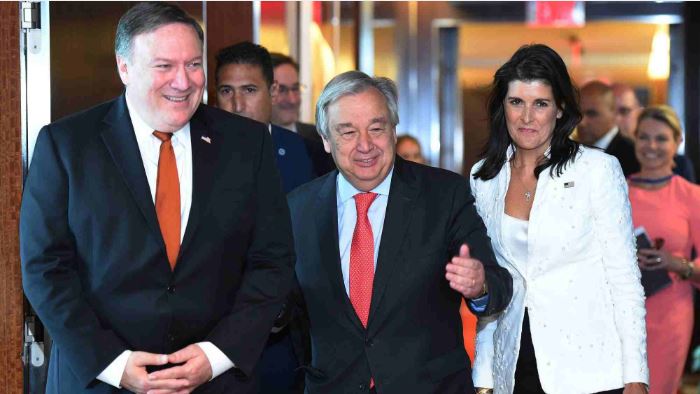 US Secretary of State Mike Pompeo said Friday that President Donald Trump remains optimistic about the prospects of denuclearization on the Korean Peninsula.

Pompeo briefed reporters at the United Nations' (UN) headquarters following his meeting with UN Secretary-General Antonio Guterres and members of the Security Council.

"President Trump remains upbeat about the prospects of denuclearization of North Korea (DPRK). So do I, as progress is happening," said the top US diplomat.

"It is the Trump administration's hope that one day the DPRK could be in our midst here at the United Nations," he said.

"The countries of the Security Council are united on the need for final, fully verified denuclearization of North Korea, as agreed to by Chairman Kim [Jong Un]. Strict enforcement of sanctions is critical to our achieving this goal," said Pompeo, who was accompanied by US Ambassador to the UN Nikki Haley.

During their historic summit last month, Trump and the DPRK's top leader Kim Jong Un agreed to work towards the "complete denuclearization" of the Korean Peninsula.

Despite progress made with Trump and Kim's historic meeting in Singapore last month, uncertainties remain regarding the Korean Peninsula. Washington is still exerting great pressure on Pyongyang even after the DPRK dismantled some of its nuclear facilities.