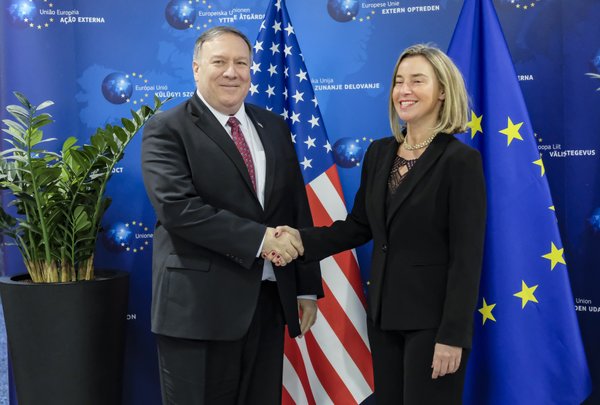 US Secretary of State Mike Pompeo wrapped up a five-nation tour of Europe in Iceland on Friday after the Trump administration launched a scathing attack on the European Union over its approach to Iran.

Pompeo was in the Icelandic capital for talks with officials on enhancing trade, Arctic policy, threats posed by Russia and other NATO security issues. Pompeo noted that he was the first secretary of state to visit Reykjavik since 2008 and, as he did at previous stops in Hungary and Slovakia, said the US was re-engaging with allies that it had neglected over the past decade.

“No more we will take our friends, our true allies, our partners for granted,” he said. “We simply can’t afford to neglect them.”

The brief visit to Iceland on his way back to Washington came after a short stop earlier Friday in Brussels, where he met with the EU’s top diplomat.

The breakfast meeting with EU foreign policy chief Federica Mogherini came just a day after US Vice President Mike Pence accused Britain, France, Germany and the EU as a whole of trying to evade US sanctions on Iran.

Pence also called on the EU to join the Trump administration in withdrawing from the landmark 2015 nuclear deal with Iran.

Pence launched his offensive Thursday at a Middle East conference in Poland that underscored a stark two-year trans-Atlantic divide over Iran. Mogherini did not attend the conference and France and Germany did not send Cabinet-level officials to the meeting.

EU diplomats said before the Warsaw conference that it appeared aimed at driving a wedge between the Europeans and Iran, as the 28-nation bloc struggles to keep alive the Iran nuclear deal after the United States reneged on it last year.

Mogherini smiled, shook her head and waved away a question about Pence’s speech as she sat down with Pompeo and aides at EU headquarters. Neither spoke to reporters.

A senior EU official, who was not present but was briefed on the meeting, said the pair “did not specifically discuss Iran.” The official, who is not permitted to speak publicly about the talks, said Iran did come up in the context of a discussion about the Middle East.

“Iran was in the discussion but it was not a discussion about Iran,” he said.

Pence’s harsh criticism threatened to further chill US-European ties, which are already badly strained on many issues, including trade and defense spending.

Britain, France and Germany, along with the rest of the EU, continue to support the nuclear deal as the best way to prevent Iran from developing atomic weapons.

The senior EU official said Mogherini and Pompeo also discussed the possible use of sanctions against Russia after it confiscated Ukrainian ships and imprisoned 24 sailors near the Sea of Azov off Ukraine.

The EU is working on a travel ban and asset freeze for about half a dozen mid-ranking Russian officials.

EU foreign ministers will discuss the move on Monday, but it’s unlikely any sanctions will be announced then.

Mogherini and Pompeo also discussed the crisis in Venezuela, the conflict in Syria, Afghan peace efforts, the upcoming North Korea summit, the EU official said. No details were provided.