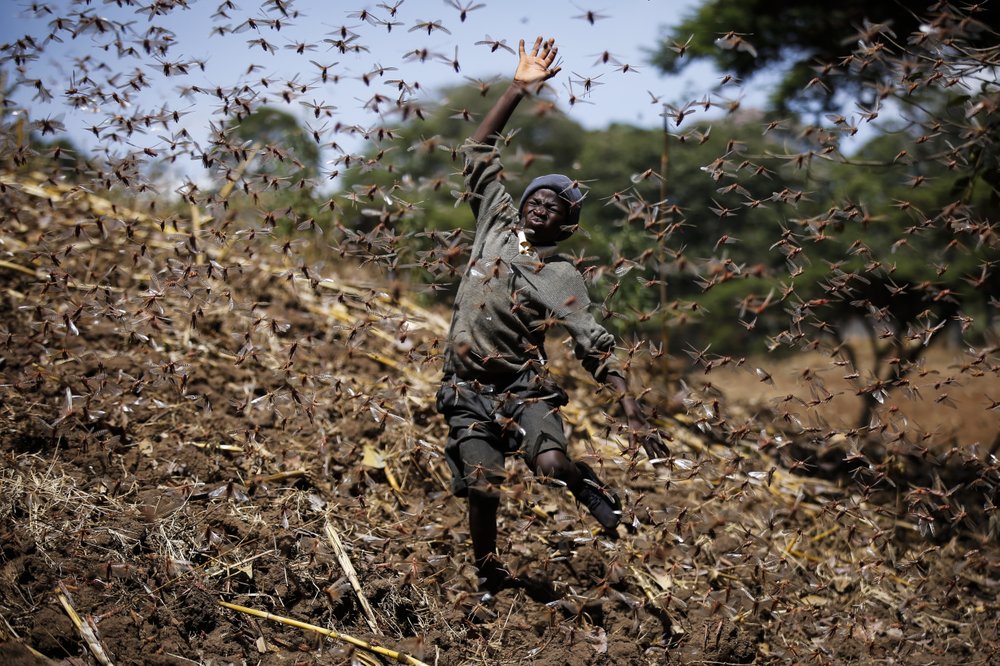 Stephen Mudoga, 12, the son of a farmer, chases away a swarm of locusts on his farm as he returns home from school, at Elburgon, in Nakuru county, Kenya Wednesday, March 17, 2021. (Photo: AP)

In a convoy of pickup trucks fitted with spray guns, soldiers zoom through Baraka’ s hills leaving a trail of dust and bemused villagers in its wake.

The vehicles brake when the soldiers see the enemy: billions of invading desert locusts that have landed in a twitching swarm where a forested area meets farmland.

The deployment of soldiers among the usual agriculture officials is a testament to the seriousness of the threat as East Africa’s locust outbreak continues well into a second year. The young locusts arrive in waves from breeding grounds in Somalia, where insecurity hampers the response.

It’s the beginning of the planting season in Kenya, but the delayed rains have brought a small amount of optimism in the fight against the locusts, though farmers still worry about their crops.

The United Nations’ Food and Agriculture Organization says the locust swarms have been spotted in the Rift Valley — which produces Kenya’s staple foods of maize, wheat and potatoes.

But the FAO says that as a result of the poor rains in Kenya and neighboring Ethiopia, the swarms in both countries are remaining immature. Their numbers also continue to decline due to ongoing control operations.

Without rainfall, the swarms will not breed, severely limiting the scale and extent of their threat, the FAO says in a recent update.

“For this reason, there is cautious optimism that the current upsurge is winding down in the Horn of Africa, especially if poor rains limit breeding this spring in northern Kenya and southern Ethiopia, followed by equally poor rains during the summer in northeast Ethiopia.”

Last year, authorities managed to contain what was seen as the biggest locust infestation in Kenya in 70 years, largely through coordinated aerial spraying which covered vast territories quickly.

Many of those swarms were in uninhabited areas. This year the swarms have presented a different challenge by landing in more inhabited areas. That means spraying is out of the question because it could adversely affect people and livestock, says Ambrose Nyatich, a livelihood recovery expert with the FAO.

So the delayed rains are a benefit — in part.

A typical desert locust swarm can contain up to 150 million locusts per square kilometer, according to the East African regional body, the Intergovernmental Authority on Development. “An average swarm can destroy as much food crops in a day as is sufficient to feed 2,500 people.”

Farmers like Hannah Nyokabi in the community of Baraka — which means “blessing” in Swahili — find themselves in a difficult situation. Poor rains might lessen the locust threat but will almost certainly mean a poor harvest.

“Things have gone very bad. If you look at the farm there is nothing,” she said. “We have children who are in school, and we were depending on the farm for their fees.”

Another farmer, Anne Wa Mago, 60, called a poor harvest better than nothing.

“We are lucky (the locusts) arrived when we had not planted, otherwise they would have wiped out our produce,” she said, motioning at thousands of the voracious insects crowding a tree branch.

Groups of school children, some still in uniforms, ran around the farms snatching the locusts from the air or the ground.

To them, the swarm that recently arrived, almost blighting the sun, is a windfall like no other. A kilogram of locusts fetches money from a non-governmental organization that wants to turn the insects into livestock food.

“This is money that has come to our doorstep,” said 16-year-old John Mbithi. Anne Wangari, 12, said she had collected 35 kilograms before leaving for school.

But Nyatich with the FAO warned against using locusts for food because they could have been sprayed with insecticide.

“The initiatives that were being conducted by some organizations to try and use locusts for fish feeds or animal feeds is something that should be looked into in terms of how can we regulate it going forward maybe in the future,” Nyatich said.