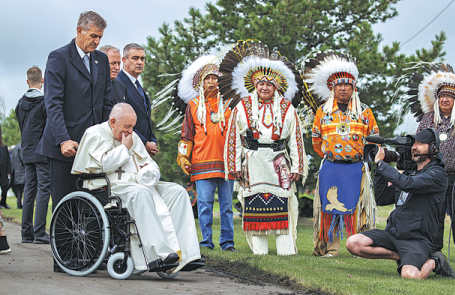 Pope Francis pauses at the site of the former Ermineskin Residential School in Maskwacis, Alberta, on Monday. COLE BURSTON/GETTY IMAGES/AFP

Pope Francis started his trip of "penance" in Canada on Monday by apologizing to Indigenous people for abuses by missionaries at residential schools and begging for forgiveness while promising an investigation into the century-long abuse.

But Indigenous leaders and survivors of the residential school system said they want action rather than an apology from the 85-year-old pontiff, who said the forced assimilation of Native people into Christian society destroyed their culture, severed families and marginalized generations in ways still being felt today.

"I humbly beg forgiveness for the evil committed by so many Christians against the Indigenous peoples," Francis told a large crowd of Indigenous people near the site of the former Ermineskin Indian Residential School, now largely torn down, on lands of four Cree nations in Maskwacis, Alberta, south of the provincial capital Edmonton.

The pope apologized in a powwow circle, a covered ring surrounding an open space used for traditional dancing and drumming circles. Many in the crowd wore traditional dress.

The pope is making the weeklong "penitential pilgrimage" apology tour of Canada to fulfill a promise he made to Indigenous delegations that visited him this year at the Vatican, where on April 1 he made an initial apology saying he felt "sorrow and shame".

Willie Littlechild, a Cree chief and lawyer who worked on the committee that published a report and interviewed more than 7,000 survivors of the abusive school system, expressed appreciation for Francis' visit as a survivor himself.

But Indigenous leaders and residential school survivors told Reuters that they are hoping for more than an apology: They want an action.

"There are those that are saying, 'What's an apology?' We don't need an apology. We need action," said Bobby Cameron, chief of the Federation of Sovereign Indigenous Nations.

Survivors and leaders of Indigenous communities say they want financial compensation, recovery of artifacts, support in bringing alleged abusers to justice and the release of records relating to the schools.

"Rescinding the papal bulls, opening up the archives for survivors to find their family and to piece together what happened in the schools," Indigenous lawyer Eleanore Sunchild said in listing the actions sought of the Vatican. She was among the delegates in Rome this spring.

"There's so much healing to do from what the church left in our communities. To actually heal the survivors … that is a compensation package we have never had," Sunchild told Reuters.

The discovery of the remains of 215 children at a former residential school in Kamloops, British Columbia Province, in May last year uncovered what Prime Minister Justin Trudeau called a "dark and shameful chapter" of the country's history.

Between 1881 and 1996, more than 150,000 Indigenous children were separated from families and brought to residential schools. Many of the children were starved, beaten and sexually abused in a system that Canada's Truth and Reconciliation Commission called "cultural genocide".