Senior citizens in the eastern Polish city of Bialystok sit on city benches after a summer storm had passed, holding small Polish flags as they wait patiently for the man they call "my president." 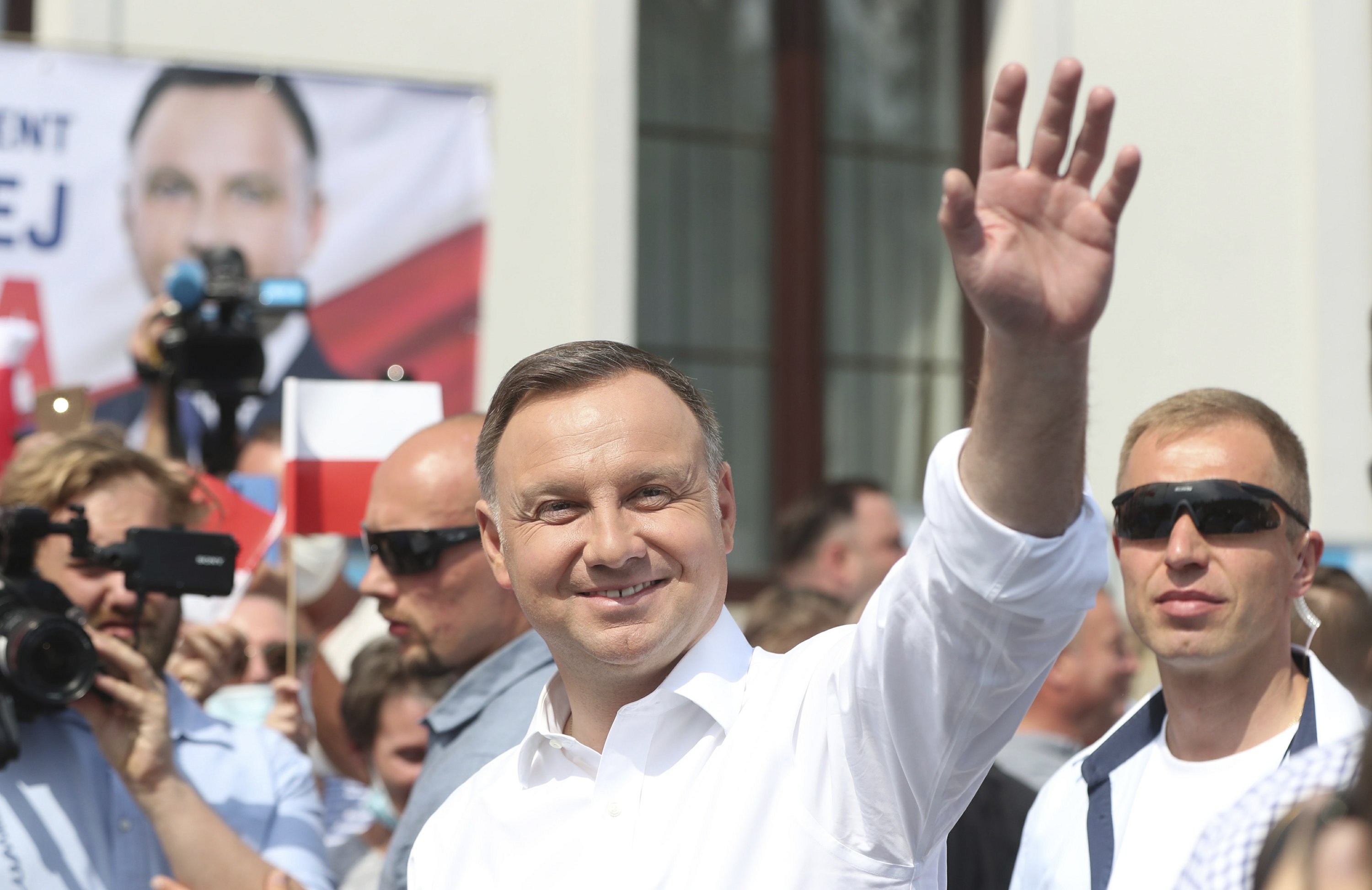 In this Wednesday, June 17, 2020 file photo, Polish President Andrzej Duda waves to supporters as he campaigns for a second term in Serock, Poland. (Photo: AP)

They lived for decades under officially atheist communist rule, experienced poverty in the transition to capitalism and watched an exodus of youth when Poland joined the European Union in 2004.

Now they feel they finally have their just reward: President Andrzej Duda, and the nationalist conservative Law and Justice party that he is aligned with, share their traditional Catholic beliefs and have returned some of Poland's new wealth to them via welfare spending programs introduced in their past five years of power.

"What they did in five years wasn't done in the 50 years before that," said 80-year-old Waclaw Waluk, one of those waiting for Duda. "Things have never been this good."

Such strong convictions in conservative strongholds like the northeastern region around Bialystok explain why Duda is the most popular of 11 candidates in Poland's presidential election on Sunday. The area, underdeveloped and poor for decades, has been transformed by a booming economy and EU investments, with new roads and a bustling town center filled with cafes and ice cream parlors.

Opinion polls show Duda with about 40% support as he seeks a second five-year term, ahead of Warsaw Mayor Rafal Trzaskowski, who has nearly 30%. The others all poll below 10%.

If Duda falls short of the majority of the vote needed to win outright, it would trigger a runoff election July 12.

That contest could come down to two 48-year-old politicians who embody the deeply divided nation: Duda, representing Poles with a traditionalist and nationalist mindset, against Trzaskowki, the multilingual mayor whose supporters want a liberal, cosmopolitan country.

Polls show such a runoff would be extremely close.

Duda could get a boost from a meeting Wednesday with President Donald Trump at the White House, an invitation so close to Sunday's vote that some view it as election interference by the U.S. leader.

Much of Trzaskowski's support  comes from Poles angry at a government they blame for corruption, inciting homophobia and xenophobia, and undermining the country's democratic foundations.

"I will vote for any candidate who is against Duda, and at this moment Trzaskowski has the best chance of beating him," said Pawel Bednarczyk, a 40-year-old carpenter in Bialystok waiting to hear Trzaskowski speak in the town a day after Duda's visit.

Duda and the ruling Law and Justice party won separate presidential and parliamentary elections in 2015, and he has since signed most of the laws the party proposed, including controversial legislation giving it control over Poland's highest courts and other judicial bodies. His critics have mockingly nicknamed him "The Pen."

"If they gave him a telephone book, he would sign that too," Bednarczyk said.

Poland has since been in near-constant conflict with the EU, which condemns the judicial changes as a broader threat to democratic standards.

Critics also fault Duda for a negative campaign. He called the political opposition "a virus worse than coronavirus" for Poland's economy, even though it oversaw years of strong growth. He has vowed to defend families from "LGBT ideology." Meanwhile, taxpayer-funded TV has used anti-Semitic tropes to try to portray Trzaskowski, who is Catholic, as linked to foreign Jewish interests.

Duda's liberal critics view the election as the last chance to stop an irreversible erosion of democracy in Poland and a chance to turn the tide against populism globally.

LGBT activists say they feel dehumanized by Duda's rhetoric and have held street demonstrations. One took place hours before Duda's speech in Bialystok, where people gathered with signs saying "Love is Love" and "I am a person."

Ewa Miastkowska, the mother of a gay son, said the anti-LGBT language of Duda and other conservative politicians has provoked distress and fear for gay and lesbian Poles and their families.

"They refer to Christian values and family values," she said. "But in fact, everything they do is contrary to Christianity and the defense of the family."

The conservative party's supporters praise Duda for standing against an increasingly visible gay rights movement. They say democracy is healthy and support the government's argument that it is reforming the courts and cleaning up ingrained corruption.

Duda and Law and Justice are also popular for keeping promises made five years ago to introduce welfare programs now credited with lifting many Poles out of poverty.

They introduced a monthly cash bonus of 500 zlotys ($125) to families for each child under 18, regardless of family income. They lowered the retirement age from 67 to 65 for men and 60 for women, raised pensions, cut the costs of some medications and last year began yearly cash bonuses for pensioners as well.

The bonuses and lower retirement ages are so popular that Trzaskowski has vowed to keep them, saying he has heard what the voters want. He belongs to Civic Platform, a centrist pro-business party that rejected increased welfare spending when it governed in 2007-15. Those policies helped the state budget but are blamed for increasing economic inequality.

Antoni Kryszylo, a 74-year-old retired taxi driver, says life was bad in the past. Of his five children, one died and the other four left Poland to "earn their bread" and have not returned. Five years ago, he had a pension of 1,700 zlotys ($430) and could not afford heart medication costing 500 zlotys ($125) per month.

Now, his pension has increased, the cost of the medicine was slashed and he can afford to take it daily. He says he is still alive thanks to Duda.

At his speech in Bialystock, Duda promised to keep improving the living standards of Poles until their nation catches up with Western Europe.

"I want a Poland which knows how to protect the weakest," Duda told the crowd, then was greeted with chants of "Andrzej Duda! and "Long Live Poland!"