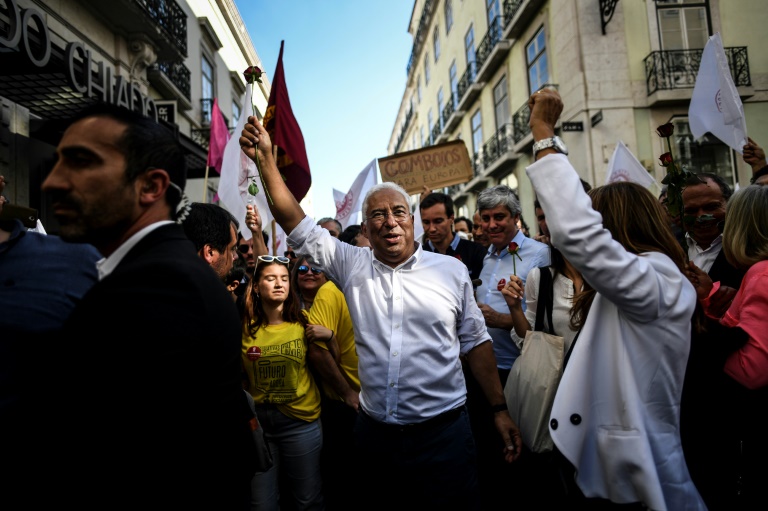 Portugal votes on Sunday with Prime Minister Antonio Costa's Socialists tipped to win a second straight term after presiding over a period of solid economic growth following years of austerity.

Final opinion polls published Friday put support for the Socialist Party (PS) -- which has governed for the past four years with the backing in parliament of two smaller hard-left parties -- at 36-39 percent, compared to 25-30 percent for nearest rivals the centre-right Social Democrats (PSD).

If these results are confirmed the PS would boost their number in Portugal's 230-seat parliament but still fall short of an absolute majority, meaning former Lisbon mayor Costa would once again need the support of at least one other leftist party to govern.

Growth up, deficit down

After coming to power in 2015, Costa, 58, moved quickly to undo some of the unpopular austerity measures introduced by the previous PSD-led government in return for a 78-billion-euro ($85 billion) international bailout that kept finances afloat after Portugal was clobbered by the eurozone debt crisis.

Taking advantage of the global economic recovery, he reversed cuts to public sector wages and pensions while still managing to bring the budget deficit down to nearly zero this year -- the lowest level since Portugal's return to democracy in 1974.

On his watch Portugal's economic growth was higher than the European average in recent years -- 3.5 percent in 2017 and 2.4 percent in 2018 -- while the jobless rate fell the level before the debt crisis.

"Every vote counts and we need a strong PS to guarantee four more years of stability," Costa said Friday on the last day campaigning was allowed.

His main adversary, PSD leader Rui Rio, has railed against high taxes and inadequate public investment, which he argues are hurting public services, but he appears to have accepted defeat.

"It would be nice to be able to say that I am almost sure to win, but it is not the case," he said during an interview with TSF radio on Friday.

Rio has managed to reduce the margin separating the PSD and the PS in recent weeks, especially after a scandal concerning former defence minister Jose Azeredo Lopes resurged.

Lopes was charged last week with abuse of power and denial of justice over his role in the alleged cover-up of an arms theft from a military depot two years ago.

The tensions of the campaign appeared to be getting to the outgoing premier.

When an elderly voter challenged him during a final campaign appearance on Friday in Lisbon over the government's handling of wildfires in central Portugal in June 2017 that killed more than 60 people, the normally affable Costa lost his temper.

The two parties which propped up Costa's previous government -- the Communists and the Left Bloc -- together have about 17 percent support, slightly less than the score they obtained in the last election.

But Sunday's vote could give him another potential government ally as polls suggest an upstart People-Animals-Nature party (PAN) founded by a Buddhist philosopher could ride a wave of concern about climate change and capture three to four percent of the vote, giving it a potential kingmaker role.