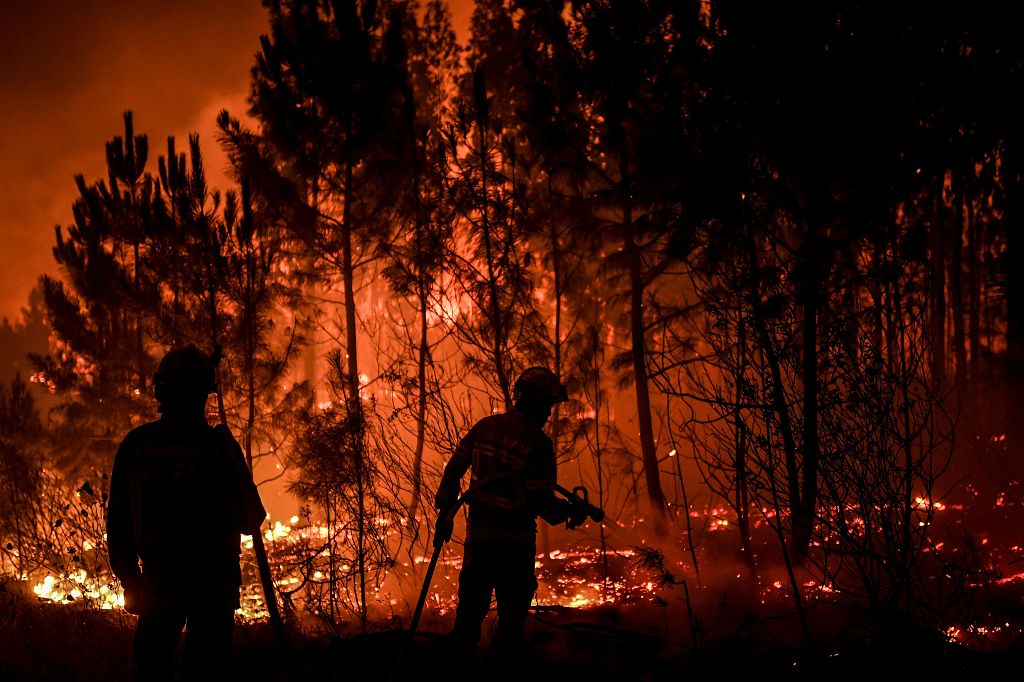 Hundreds of Portuguese firefighters aided by overnight rain gained the upper hand Tuesday against massive wildfires raging for four days and said they hoped to bring them completely under control later in the day before winds pick up and temperatures rise again.

Meanwhile Portugal's civil protection agency rejected critism that not enough resources were deployed to battle the blazes which have ripped through the heavily forested Castelo Branco region, 200 kilometres (120 miles) north of Lisbon, scorching large areas and leaving a trail of blackened destruction.

"The work carried out throughout the night has born its fruits," commander Luis Belo Costa of the agency told a news conference.

"It has been a constant effort. Let's see if we can finish the job," he said, adding that firefighters had managed to stop the advance of the flames in hard-to-reach areas.

Light rains overnight raised humidity levels, aiding the battle against the blazes which the authorities suspect were deliberately started.

But Costa warned winds were expected to pick up in the afternoon, which could complicate the task.

Portugal's civil protection agency had said on Monday morning the wildfires were "90 percent controlled", but strong winds fanned the flames into life again in the afternoon.

At least 7,000 hectares (17,300 acres) have so far been scorched, according to the EU's European Forest Fire Information System.

Many local residents and mayors of the villages in the affected area have complained that not enough firefighters have been deployed to fight the flames.

"It's not that there weren't any firefighters but since the blaze was very big, there were few (resources) for this fire," the mayor of the town of Vila de Rei, Ricardo Aires, told public broadcaster RTP earlier this week.

But Costa said adequate resources had been deployed to fight the blaze and recalled that firefighters were also needed to fight smaller outbreaks in other parts of the country.

"We don't have infinite means to use. We have to know how to manage them. If there are needs in another part of the country, we have to deal with those situations," he said.

Two aircraft sent by Spain on Monday following a request from Lisbon were not as yet being deployed to fight the fire on Tuesday, Costa added without saying why.

Some 650 firefighters were battling dozens of other smaller fires in other parts of drought-hit Portugal on Tuesday, according to the civil protection agency's website.

Thirty-nine people including several firefighters have been injured since the wildfires broke out in Castelo Branco, with most suffering smoke inhalation, according to emergency service INEM.

A farmer who reportedly sustained serious burns as he tried to protect his tractor from the flames was evacuated to a Lisbon hospital on Sunday.

The centre of Portugal is hilly and covered in dense forest and is regularly ravaged by fires, including the deadliest in the country's history when 114 people died in two separate blazes in June and October 2017.

Much of the population in the area is elderly, as young people move to the cities.

The forests are largely eucalyptus, a highly flammable wood used in the paper industry.

Despite the combustion risks, the trees are planted because they are fast-growing and a major source of income for locals.

With fields and pastures abandoned, the forests are poorly maintained, and the dense undergrowth facilitates the spread of the fires.

"We continue to have problems with the Portuguese forest, because of the species that exist, the small plots of land which don't encourage good management," Domingos Xavier Viegas, an expert on forest fires in Portugal at the University of Coimbra, told AFP.