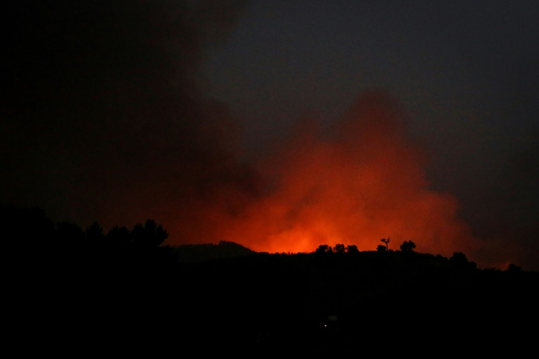 Wildfires are closing in on the Portuguese Algarve town of Monchique. (Photo: AFP)

Sweltering temperatures kindled blazes that have whipped across the region as the Europe-wide heatwave sent the mercury above 45 degrees Celsius (113 Fahrenheit) in some areas of Portugal at the weekend.

Fire crews struggled to extinguish wildfires around the mountain town of Monchique that have left 30 people injured, one seriously.

Hundreds of residents were forced to leave their homes while tourists -- including Britons -- were evacuated from a plush hotel.

Images released by the European Space Agency appear to show the fires are visible from the International Space Station.

Interior minister Eduardo Cabrito said the relief effort was being coordinated at a "national level" which will "allow greater mobilisation of resources" as meteorologists predicted "significant winds in the coming hours".

However, firefighters criticised the lack of coordination.

Fernando Curto, the president of the National Association of Professional Firefighters told Radio Renasceneca: "I spoke to one of my colleagues who is in the Algarve to fight the fires and he told me that it was totally disorganised. In certain aspects, nobody understands each other."

Responding to firefighters' calls to meet the interior minister, Cabrito said: "We do not take stock in the heat of battle. Our priority now is to fight this fire." 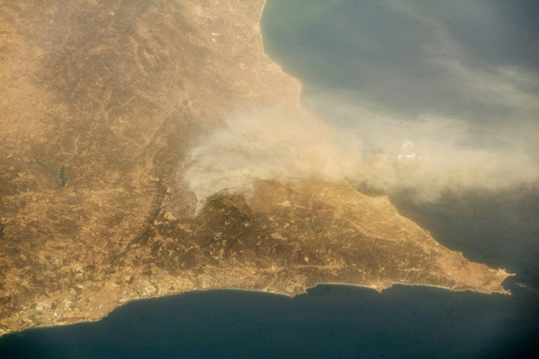 The Monchique fire appeared to be visible from space. (Photo: AFP)

Around 250 people were evacuated on Monday evening from villages around Monchique, a mountain town of 6,000 inhabitants in the mountain range of the same name, around 160 kilometres (100 miles) south of Lisbon.

On Sunday night, a group of mainly English guests were evacuated from a five-star resort high in the hills to other hotels in the area.

Fire crews used aeroplanes and helicopters as well as several hundred vehicles Tuesday in a fresh attempt to contain the blazes, which have raged for days stoked by the strong winds.

The wildfires, which have consumed some 15,000 hectares (76,000 acres) of forest, crept closer to the enclave overnight, leaving behind a blackened path of charred houses and incinerated cars.

"There are several main homes affected. But for the moment we are not yet able to make an assessment," said Monchique mayor Rui Andre, according to local media.

By Tuesday afternoon the flames were about 500 metres (550 yards) from a fire station and a 17th-century convent. The blaze has also damaged about 40 kilometres (25 miles) of power lines.

A 76-year-old woman has been sent to hospital in Lisbon for treatment due to the fires, which took hold last week around Monchique at the highest point of the Algarve tourist region. 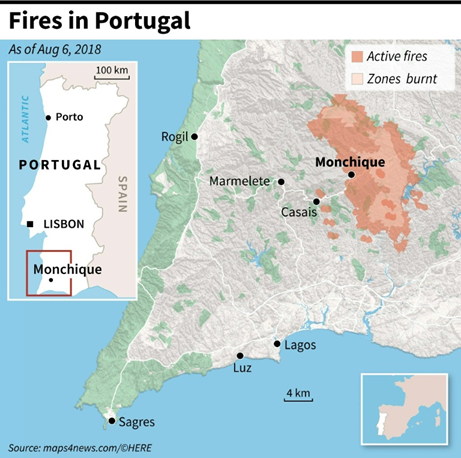 Authorities had hoped to contain the fires on Monday, but the country's civil protection service said that strong winds had revived the flames, "which immediately took on large proportions".

The difficulty in bringing the fires under control has raised eyebrows after the Portuguese authorities brought in various measures in a bid to avoid a repetition of fires that killed at least 114 people last year.

In the Valencia region of neighbouring Spain some 2,500 people were driven from their homes overnight to escape flames that have already swept across around 1,000 hectares, as fire crews struggled to bring the fires under control.