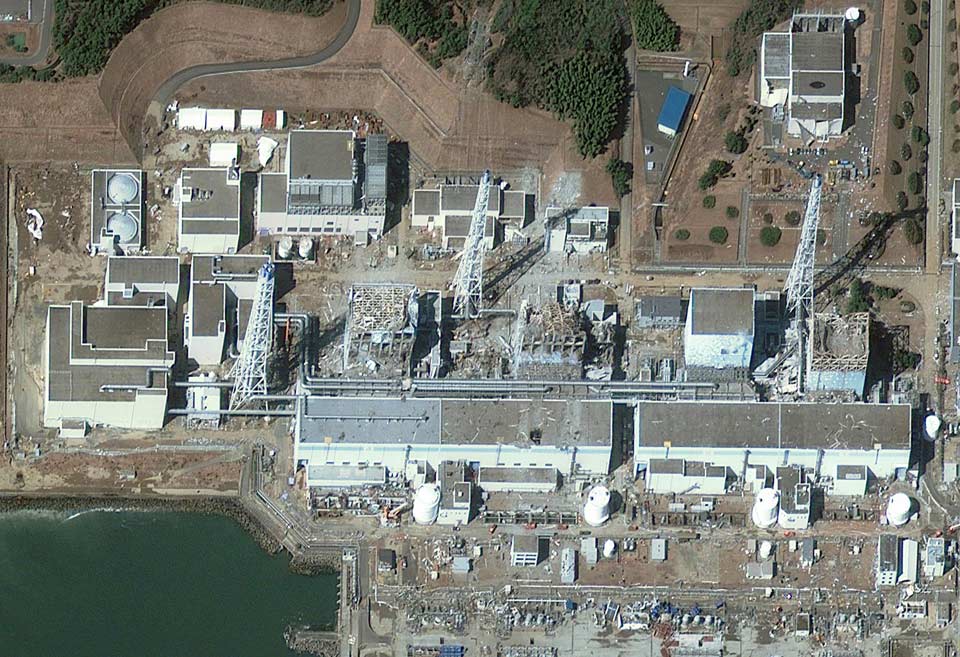 The damaged Fukushima Daiichi Power Plant in Fukushima is seen in this satellite image, taken and released on March 18, 2011. (Photo: AFP)

TOKYO, Nov. 28 (Xinhua) -- The operator of the disaster-hit Fukushima Daiichi nuclear power plant in northeastern Japan said Thursday that radioactive rainwater may be leaking into the ground through an exhaust stack.

The exhaust duct became highly contaminated when an earthquake-triggered tsunami battered the plant in March 2011, knocking out its key cooling systems and leading to core meltdowns and hydrogen explosions, resulting in the worst global nuclear crisis since Chernobyl in 1986.

The embattled utility, in a bid to collect and contain the radioactive water, said it has installed a concrete box designed to automatically distribute the water among storage tanks when the concrete box reaches a certain capacity.

TEPCO said, however, the concrete box it has installed is leaking, with radioactive water possibly flowing freely into the ground through the holes in the box.

The utility said, ostensibly confirming the leak of radioactive water into the ground, that water levels in the concrete box are falling, even when the contaminated rainwater is not being sent to the storage tanks.

TEPCO said it has not detected any "major" changes in levels of radioactivity in groundwater surrounding the leaking box and claimed there has been no adverse affects on the environment.

As the nuclear disaster at the stricken plant in Japan's northeast continues to rumble on, the government here said earlier this month it would be safe to release radioactive water into the Pacific Ocean.

The plant in Fukushima Prefecture has being storing water that has been used to keep the nuclear cores cool after the meltdowns.

The water used to cool the melted-down cores and the groundwater at the battered plant, however, are contaminated with highly radioactive materials.

The plant is struggling to store the contaminated water in tanks at the plant and the amount of water collected has already exceeded 100 tons, with the amount rising on a daily basis and space rapidly running out.

TEPCO has said it expects the plant's water storage tanks to become full by the summer of 2020.

Concerns have been voiced, however, over how different factors could affect the impact of the release of contaminated water into the Pacific Ocean, such as the weather and the currents of the sea.

In addition, concerns have also been made over the actual amount of radiation that humans could be internally exposed to, if and when the water is released, when factoring in the consumption of contaminated fish and seaweed.

While the government has suggested dumping the excess water into the ocean would be safe, local fisherman have expressed their vehement opposition to the move.

They argue that such a move would adversely affect the reputation of their produce and, once again, make it extremely difficult if not impossible for them to earn a living.

Some neighboring countries, including South Korea, have also voiced their opposition to the idea, citing concerns over the impact on the environment if radioactive water is released from the crisis-hit plant into the Pacific Ocean.