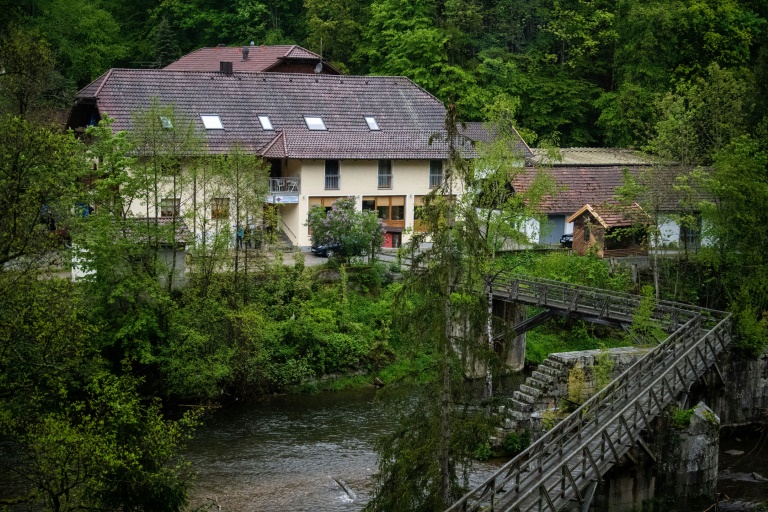 A hotel on the banks of the river Ilz in Passau, southern Germany, were police are investigating the baffling deaths of three people found in a room of the Bavarian hotel with crossbow bolts in their bodies. (Photo: AFP)

Investigators were on Tuesday pursuing leads that five mysterious deaths, including three by crossbow bolts, may have been a murder-suicide pact among Germans with a reported passion for medieval folklore and weaponry.

Police probing the initial triple death said they found the last wills of two of the victims in a hotel room, and no signs of a struggle or involvement of other people.

Germany has been baffled by the macabre case since the trio of corpses was found Saturday in a hotel in the Bavarian town of Passau, followed by Monday's discovery of two dead women across the country in the town of Wittingen.

Mass-circulation Bild daily reported that the victims had shared a fascination with the Middle Ages, including knights, jousting, weapons and alchemy.

According to an autopsy report, two of the victims in the Passau hotel room -- a man named Torsten W., 53, and a woman called Kerstin E., 33 -- were found lying in the double bed, hand-in-hand.

They were killed with crossbow shots to their heads and hearts, the post-mortems found.

The last wills of the couple from Rhineland-Palatinate state were also found in the room, police said.

The other woman, 30-year-old Farina C., lay on the floor, a single crossbow arrow in her neck -- not in her chest, as previously reported.

The local prosecutor's office said it was treating the case as a "requested killing and suicide", suggesting Farina C. first shot the couple and then herself.

The three had checked into the riverside hotel Zur Triftsperre, close to the Austrian border, on a rainy Friday night.

Farina C. reportedly paid in advance the 300 euros ($340) for three nights without breakfast before they all disappeared into their room.

The two women were dressed in black, media reports said.

The three were carrying no luggage and returned to the carpark only later to collect the crossbow bags.

Three crossbows were later found in the room, one still packed in its bag.

Bild daily said Torsten W. had for the past five months owned a shop called "Milites Conductius" that sold medieval-style swords, axes, knives, flags and clothing as well as mead, an alcoholic drink made of honey and water.

Tattooed on his arms were symbols of medieval alchemists or natural philosophers, it said.

The shop in Rhineland-Palatinate state had also provided space for sword-fighting lessons in the evenings, said Bild.

Also on display in the shop was a bizarre female mannequin wearing suspenders, tied with ropes and chains, smeared with red paint and its head bandaged, a Bild daily photo showed.

Farina C. was a bakery sales manager with a "passion for the Middle Ages community, the hustle and bustle of medieval markets with jugglers and knight tournaments," reported Munich's Merkur daily.

One of the women, a 35-year-old primary school teacher, was the partner of Farina C., the other was a 19-year-old who was also living in the same Wittingen address, police said Tuesday.

According to police, no crossbows or arrows were found at the Wittingen crime scene, inside a timber-framed house, and there were no signs of violence or a struggle.

"Initial findings show that the time of death dates back a few days," said police.

German law tightly restricts firearms but archery equipment is freely available for sports and anyone over 18 can purchase a high-powered crossbow.