WORLD Post-Brexit UK will be open to world's skilled workers

Post-Brexit UK will be open to world's skilled workers

The British government says the nation will welcome migrants from all countries after it leaves the European Union, instead of favoring unskilled workers from EU members, as it does now. 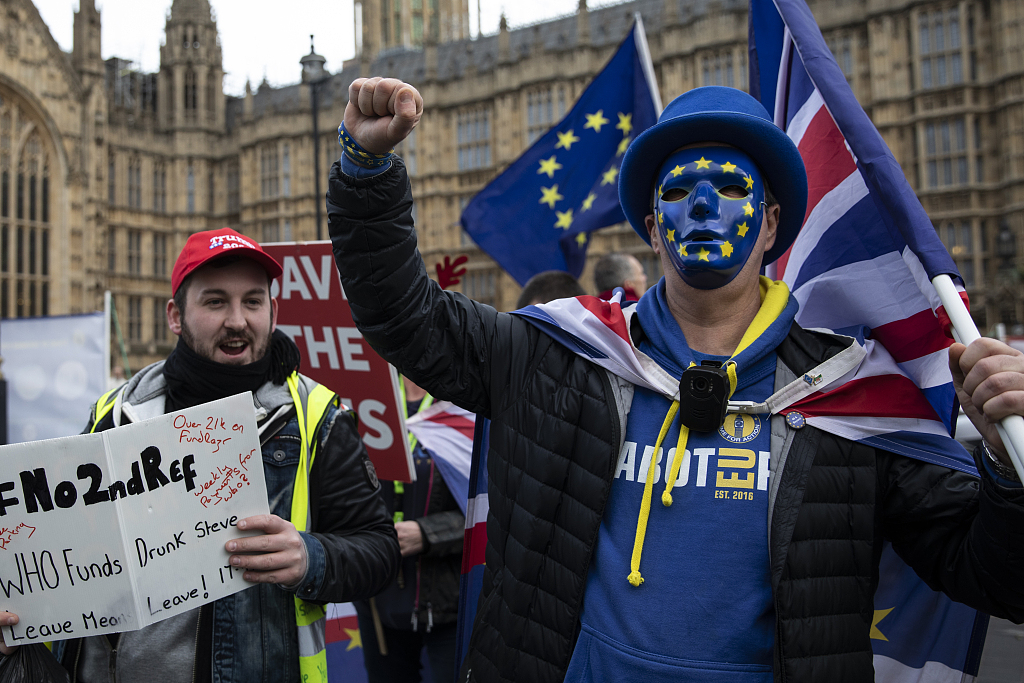 Pro and Anti Brexit protesters clash outside the Houses of Parliament on December 19, 2018 in London, England. (File photo: VCG)

Home Secretary Sajid Javid controversially also said on Wednesday the Conservative government will no longer set immigration targets. Previously, it had pledged to cut immigration into the country from several hundred thousand a year to "tens of thousands".

During Prime Minister's Questions in the House of Commons later in the day Theresa May chipped in by saying the government will, in fact, still aim to limit overall immigration to the tens of thousands.

The proposed new rules are likely to come into effect in 2021.

Javid told BBC Radio 4's Today program the new system: "Will be a single, skills-based immigration system built around the talent and expertise people can bring, rather than where they come from – maximizing the benefits of immigration and demonstrating the UK is open for business."

And he disputed the suggestion that the UK economy needs cheap, unskilled workers from EU countries for industries including hospitality, agriculture, and construction, saying it is more important that immigration not be "a burden on our communities or infrastructure".

The proposed shake-up would be the most significant overhaul of the immigration system for 40 years.

Under the new rules, the government will scrap the 20,700 maximum limit on the number of skilled workers allowed into the country each year, and make five-year work visas available to people offered jobs paying in excess of 30,000 pounds ($37,950) a year. Low-skilled workers will qualify for one-year visas.

Catherine McGuinness, policy chair of the City of London Corporation, said: "The long-awaited immigration white paper provides welcome clarity on the government's vision for delivering a skills-based system. The decision to scrap the cap on the number of skilled workers who can enter the UK is a positive signal that Global Britain is open to global talent."

British business leaders, meanwhile, strongly urged UK politicians to ensure the nation leaves the EU at the end of March in an orderly way and with a withdrawal deal in place. May's proposed Brexit deal has been criticized by members of Parliament from all sides and appears to stand little chance of being approved when debated next month.

But the British Chambers of Commerce issued a joint statement with the Confederation of British Industry,the Institute of Directors, the Federation of Small Businesses,and the manufacturers' lobby group EEF urging politicians to stop in-fighting and focus on supporting a deal with the EU.

"Businesses have been watching in horror as politicians have focused on factional disputes, rather than practical steps that business needs to move forward," the statement said.

The warning from groups representing hundreds of thousands of enterprises, was issued after May and her Cabinet met to prepare for a no-deal Brexit and decided to send out letters to 140,000 businesses advising them to plan for a no-deal scenario. The government will also issue a 100-page no-deal information pack.And ministers have agreed to make 3,500 armed forces personnel available to deal with post-Brexit problems in addition to allocating an extra 2 billion pounds for Brexit expenses.

The business groups said last-minute no-deal planning was not what was wanted.

Like the British government, the European Commission has also been planning for a possible no-deal Brexit. It announced temporary measures on Wednesday aimed at reducing negative impacts, especially in the areas of finance and transportation, but said it would not be able to mitigate all problems.

"This is an exercise in damage limitation … given the continued uncertainty in the UK," commissioner Valdis Dombrovskis said during a news conference.