WORLD Postman, shopper, builder: In Japan, there's a robot for that

Postman, shopper, builder: In Japan, there's a robot for that

Forget the flashy humanoids with their gymnastics skills: at the World Robot Summit in Tokyo, the focus was on down-to-earth robots that can deliver post, do the shopping and build a house. 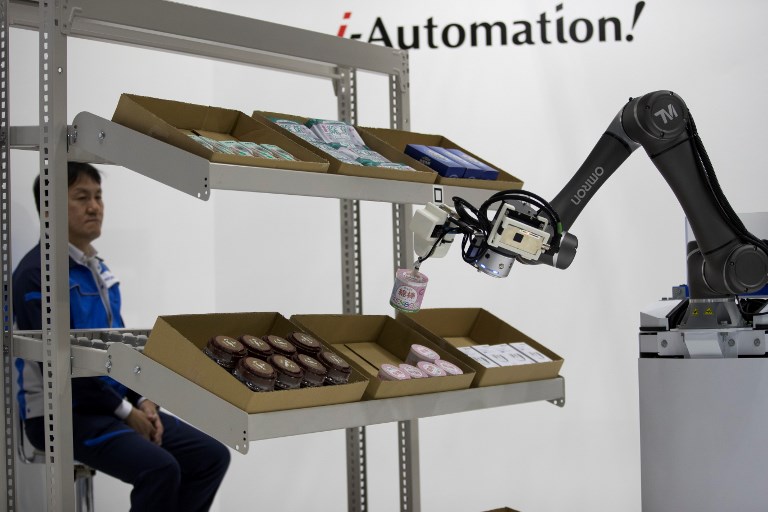 A robot developed by automation parts maker Omron picks an item from a shelf during a demonstration at the World Robot Summit in Tokyo on October 18, 2018. (Photo: AFP)

Introducing CarriRo, a delivery robot shaped a bit like a toy London bus with bright, friendly "eyes" on its front that can zip around the streets delivering packages at 6km/h (4 miles per hour).

CarriRo "is designed to roll along the pavements and direct itself via GPS to an address within a two-kilometre radius," explained Chio Ishikawa, from Sumitomo Corp, which is promoting the robot.

The lucky recipient of the package is sent a code to a smartphone allowing him or her to access CarriRo's innards and retrieve whatever is inside -- post, medicine or a take-away.

Services like this are especially needed in ageing Japan. With nearly 28 percent of the population over 65, mobility is increasingly limited and the country is struggling for working-age employees.

Toyota's HSR (Human Support Robot) may not be an oil painting to look at -- standing a metre tall, it looks like a bin with arms -- but it can provide vital help for the aged or handicapped at home.

Capable of handling and manoeuvring a variety of objects, it also provides a key interface with the outside world via its internet-connected screen for a head.

Japan's manpower shortage is felt especially keenly in the retail and construction sectors and firms at the summit were keen to demonstrate their latest solutions.

Omron showcased a robot that can be programmed to glide around a supermarket and place various items into a basket. Possibly useful for a lazy -- or infirm -- shopper but more likely to be put to use in a logistics warehouse.

Japan also has difficulty finding staff to stack shelves at its 55,000 convenience stores open 24/7 and here too, robots can fill the gap.