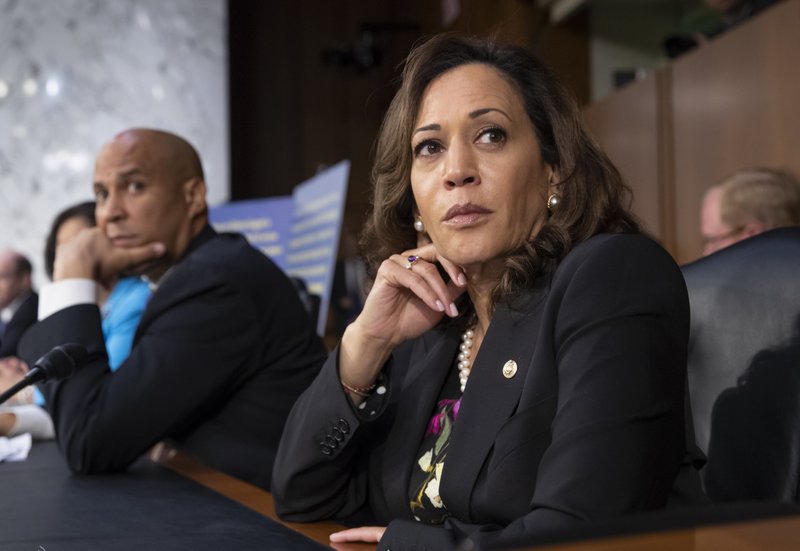 One by one, Democrats on the Senate Judiciary Committee, including Kamala Harris of California, Amy Klobuchar of Minnesota and Cory Booker of New Jersey, demanded that Republicans delay Kavanaugh’s hearing after a last-minute release of more than 40,000 pages of documents and the withholding of more than 100,000 others.

The Democrats’ coordinated showdown with the committee’s chairman, Iowa Sen. Charles Grassley, served as a theatrical preview of what is expected to be a wild, unpredictable 2020 campaign against Trump, who has stoked outrage among Democratic activists and is expected to fuel an unusually large field of challengers.

The hearing showed the degree to which the Senate could be the testing ground of resistance among Democrats who are prepared to fight the Republican president’s agenda in a field without an obvious front-runner. And it harkened back to how Barack Obama, Hillary Clinton and other Democratic senators battled President George W. Bush’s administration before launching presidential bids of their own in the 2008 contest.

Grassley hadn’t even introduced Kavanaugh by name when Harris interjected, objecting to the late Monday night release of Kavanaugh’s documents. Harris, who has created a number of viral moments with her tough questioning of witnesses during her first term, noted lawmakers hadn’t had a chance to “review or read or analyze” the papers and said the hearing shouldn’t move forward.

As Grassley tried to introduce Kavanaugh, Klobuchar called for the hearing to be postponed as the two senators attempted to talk over each other. Sen. Richard Blumenthal, D-Conn., jumped in, asking that the hearing be adjourned, prompting loud cheers and applause in the room.

Kavanaugh, a veteran judge and a former aide to Bush, sat silently as the spectacle unfolded.

Booker then appealed to Grassley’s “sense of decency and integrity,” pushing for more transparency in the hearing.

“We are rushing through this process in a way that is unnecessary,” Booker said.

Harris, Klobuchar and Booker are considering whether to enter the presidential campaign following the November midterm elections, along with other Senate Democrats who aren’t on the Judiciary Committee, such as Elizabeth Warren of Massachusetts, Kirsten Gillibrand of New York and Jeff Merkley of Oregon. Warren on Tuesday joined with activists opposed to Kavanaugh’s nomination who had gathered in a Senate office building.

Vermont Sen. Bernie Sanders, an independent who unsuccessfully battled Clinton for the 2016 Democratic presidential nomination, also is weighing another campaign.

The field could include a number of Democratic governors, members of Congress, mayors and political newcomers along with familiar faces such as former Vice President Joe Biden, who appeared at a Labor Day parade in Pittsburgh on Monday.

Trump, even with his party facing a challenging midterm election, has relished the prospect of facing off against Democrats when the presidential campaign begins in earnest next year.

The president didn’t immediately respond to the Democrats’ opposition to Kavanaugh on Tuesday. But he dismissed the possibility of another prospective candidate, former Secretary of State John Kerry, Democrats’ 2004 presidential nominee.

“I should only be so lucky,” Trump tweeted Monday, adding, “although the field that is currently assembling looks really good - FOR ME!”

None of the Democrats on the judiciary panel is expected to support Kavanaugh’s nomination. While they won’t be able to delay a vote, they are wary of appearing like they’re capitulating to Republicans, mindful of calls from liberals to do everything possible to block the nomination.

Michael Avenatti, a potential 2020 candidate and a lawyer pursuing a civil case against Trump for actress Stormy Daniels, said Senate Democrats had acted too slowly and hadn’t done enough to delay the hearing. “Outrage this morning is not enough,” he tweeted.

Republicans accused Democrats of politicizing the hearing. “It is about Democratic senators trying to re-litigate the 2016 election and, just as importantly, working to begin litigating the 2020 presidential election,” said Sen. Ted Cruz, R-Texas, a former 2016 contender.

During the hearing, the room was filled by demonstrators shouting at Kavanaugh, a reminder of the bitterness against Trump’s presidency and Democrats’ outrage over the treatment of Merrick Garland, Obama’s last Supreme Court nominee, who was denied a hearing in 2016 by Senate Majority Leader Mitch McConnell before Trump’s election.

While Senate Republicans have the votes to approve Kavanaugh on their own, Democrats can use the confirmation process to amplify their warnings that he could help overturn the 1973 Roe v. Wade decision, which established a woman’s constitutional right to an abortion, or undermine health care or other Democratic priorities.

Democrats are expected to press Kavanaugh on those issues when questioning begins Wednesday.