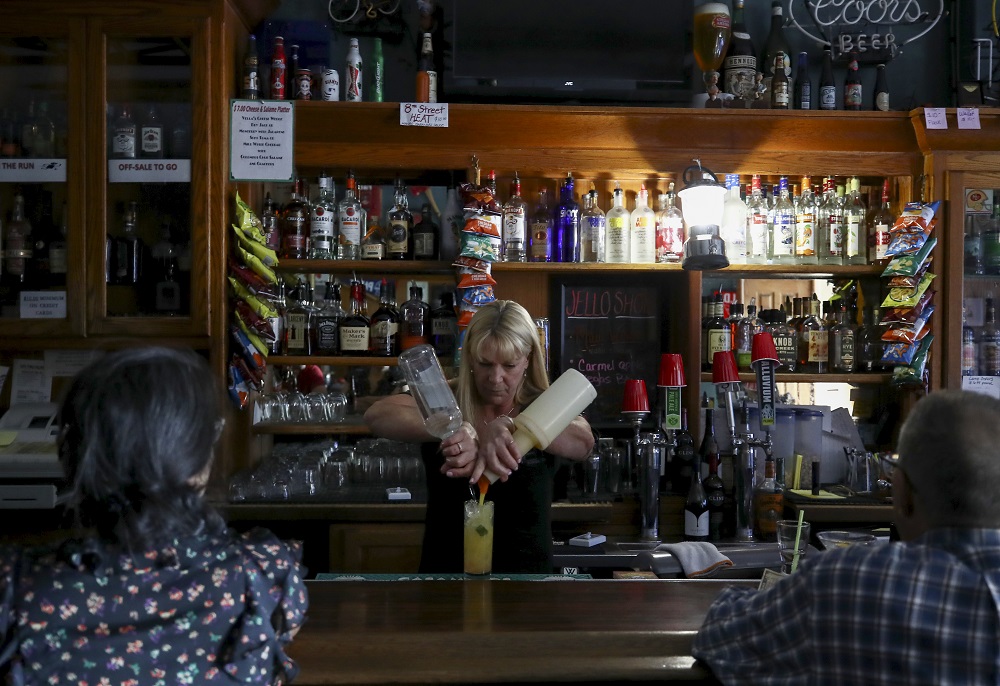 Cathy Sanchez bartends at a bar where the lights are out on Thursday in Sonoma, California. (EZRA SHAW/GETTY IMAGES)

LOS ANGELES - Hundreds of thousands of Californians were still without electricity due to preemptive blackouts on Thursday as hot, windy conditions causing wildfires spread south toward Los Angeles, with the state's governor blasting the predicament of householders as unacceptable.

Nearly 540,000 customers in the US west coast state remained in the dark on Thursday afternoon after Pacific Gas & Electric began switching off power the previous day, in a bid to prevent a repeat of last year's catastrophic infernos that killed around 90 people.

Many schools and universities have closed in northern parts of the state and people stocked up on gasoline, water, batteries and other basics, with frustration mounting.

"We're seeing a scale and scope of something that no state in the 21st century should experience," Governor Gavin Newsom said on Thursday, blaming decades of "neglect" and "mismanagement" by PG&E.

"What has occurred in the last 48 hours is kids staying home from school, parents that can't bathe their kids," he said. "Folks that come home from work, can't even find a way to get into their garage. You've got people that can't even access water, or medical supplies.

"This can't be, respectfully, the new normal," Newsom said, noting that the current weather conditions were certain to return.

Newsom said blackouts were "an industry best practice" under dangerous conditions, but blamed PG&E's failure to modernize its network for the current scale of power cuts.

PG&E defended the shut-offs, telling a news conference that inspections on Thursday had found multiple cases of damage that could have caused wildfires had the lines been live. "We faced the choice here between hardship on everyone or safety - and we chose safety," said CEO Bill Johnson. "And I do apologize for the hardship this has caused. I think we made the right call."

With high-risk "red flag" winds spreading to the Los Angeles area further south, around 13,000 customers of Southern California Edison had their electricity cut on Thursday.

"A number of fires... are burning and there have been structures that have been lost," said Mark Ghilarducci, emergency services director at the governor's office.

Firefighting planes and helicopters were called in to tackle two fires east of Los Angeles that spread to a combined 360 hectares, and were described by officials as "zero percent contained".