On an assemblage of vacant lots and other pockets of unused land in the Bronx, gardeners from low-income neighborhoods have banded together to create over a dozen “farm hubs,” coordinating their community gardens and their harvest. 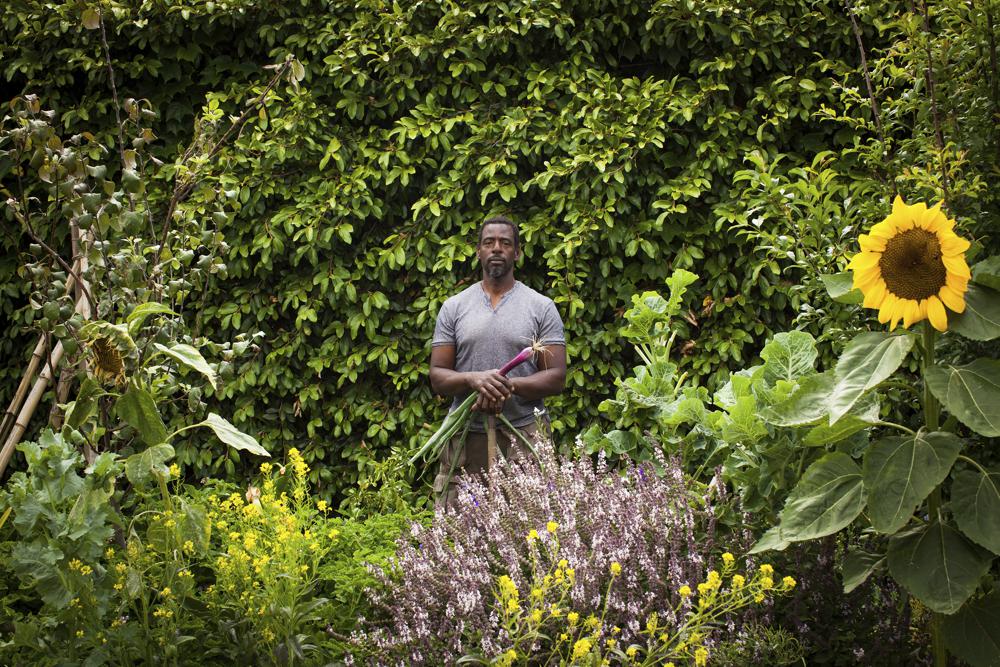 This photo provided by Stephen Zeigler shows Ron Finley in a garden in Los Angeles. Interest in gardening has grown around the country. And urban gardeners say it's particularly important for the health and resiliency of city neighborhoods. (Photo: AP)

Several years ago, some discovered that, together, their small gardens could grow enough peppers to mass-produce hot sauce — Bronx Hot Sauce, to be precise, with profits from the sales reinvested in their communities.

During the pandemic, the farm hubs of the Bronx have again proved their might, producing health-boosting crops like garlic, kale and collard greens.

“The trick is, how can we learn from the pandemic so that we become genuinely resilient?” says Raymond Figueroa-Reyes, president of the New York City Community Garden Coalition.

“When the pandemic hit, urban farming went into hyper-productivity mode. People saw that the (food) donations coming in were are not adequate in terms of quantity or quality, and there is no dignity in waiting on that type of charity,” he says.

The farm hubs are part of an urban gardening movement across the country dedicated to empowering residents of poorer neighborhoods by encouraging them to grow fresh food.

Areas (both urban and rural) with little access to healthy, fresh food have been called “food deserts,” and tend to have high rates of diabetes and other diseases, such as hypertension and obesity. In cities, where many see the phenomenon as inseparable from deeper issues of race and equity, some community leaders prefer terms like “food prisons” or “food apartheid.”

Ron Finley in Los Angeles has been at the forefront of urban gardening for years. He sees gardening as both therapeutic and an act of defiance.

“Growing your own food is like printing your own money,” says Finley, who runs the nonprofit Ron Finley Project. “It’s not just about food, it’s about freedom. It’s our revolution, and our eco-lution.”

Finley grew up in South Central Los Angeles, where he says he had to drive 45 minutes just to get a fresh tomato. His efforts to rejuvenate communities through gardening have included planting vegetables on neglected parkways and other pieces of unused land, and teaching online classes to global audiences about the power of growing food.

Millions of Americans live in neighborhoods without healthy food options. The same neighborhoods are magnets for fast-food restaurants and the packaged foods available at drug stores and convenience stores.

“The drive-thru is killing more people in our communities than the drive-by,” Finley says. “I want people to come back to reality, to touch the soil and take back some of the things that have been taken away. When you plant a seed, it will multiply. It’s a currency. It’s a valuable resource. That’s empowering. It’s about more than food.”

In the Bronx, Karen Washington, who has spent decades promoting urban farming, said it is about “food justice.” (She helped coordinate the pepper-growing that led to Bronx Hot Sauce; the company they worked with, Small Axe Peppers, now makes hot sauce with community-grown peppers from Queens, Detroit, Chicago, Oakland and other cities.)

“Healthy food is a human right, along with clean water,” she said.

A board member of the New York Botanical Garden, Washington has worked with neighborhoods to turn empty lots into community gardens, and helped launch City Farms Market, which brings affordable fresh produce grown in community gardens or on upstate farms to a weekly farmers market in the Bronx.

She co-founded Black Urban Growers and helped found the Black Farmer Fund, which aims to provide access to capital for black farmers and entrepreneurs.

COVID had a big impact on people wanting to grow their own food, and Washington said she sees more people growing food on city terraces and in yards across the country.

“It really gained urgency during the early stages of COVID, before the vaccines came out. If we are going to fight viruses, especially in these neighborhoods with a lot of diabetes and obesity, we need to start eating healthy,” Washington says.

“Folks said, we gotta get into these unused spaces and we gotta grow food,” he says. “There is a collective effort around organizing farm hubs with the idea of growing more immune-boosting food and getting it to where it’s needed most.”

“We came together with longtime community partners early in the pandemic, realizing that food insecurity has always been a big issue in the Bronx,” says Ursula Chanse, the program’s director.