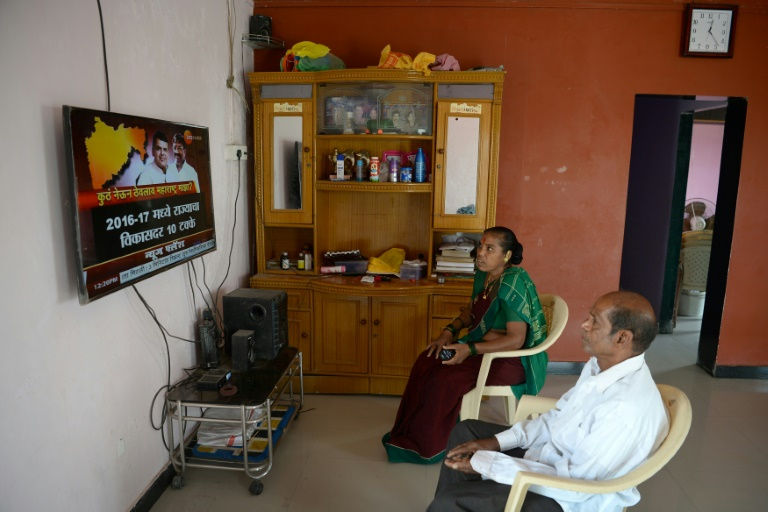 A couple watch television on Elephanta island near Mumbai, where hundreds of villagers have had mains electricity installed in their houses for the first time.(Photo: AFP)

Deepa Bhoir used to sit in darkness outside her island home and stare at Mumbai glowing in the distance. Now she stays up late watching soap operas -- one of millions of Indians whose lives have been transformed by a drive to get power to every corner of the country.

Bhoir and her husband Sasuram are among hundreds of villagers on the UNESCO world heritage-listed island of Elephanta to have had mains electricity installed in their houses for the first time.

Local officials hope tourists, who take a short boat ride from the bustle of Mumbai to visit the island's famed fifth century caves, will now spend more time and money there, boosting local businesses and jobs.

"We've waited decades for this and we're so happy. Now I can watch all my favourite shows without any interruptions. The TV is almost always on!" Bhoir tells AFP, grinning.

The island is renowned for its temple caves dating back more than 1,500 years and is home to around 1,200 people.

But despite living just 10 kilometres (six miles) from India's financial capital, islanders have spent much of their lives without power.

"Lacking electricity was depressing and we faced numerous hardships," says Sasuram, explaining that he and Deepa would often sleep outside during the summer to try to keep cool.

"It was sweltering inside. We would lie and look at the glittering lights of Mumbai and long for electricity to live fuller and more satisfying lives," the 54-year-old adds.

Residents used kerosene lamps and candles until the late 1980s when they received diesel generators that provided intermittent electricity between 7:00 pm and 10:00 pm every night.

They were, however, unreliable and expensive and the limited supply meant the Bhoirs' two children regularly did their homework by candlelight.

Deepa and Sasuram were often unable to charge their phones or other electrical devices. They felt cut off from the world and battled boredom.

"We would go to sleep early because there was nothing much to do. But now we stay awake to midnight or 1 am watching our favourite shows. It's a welcome change," says Deepa, 43.

More than 16,000 Indian villages have been electrified since Prime Minister Narendra Modi was elected in 2014, according to government data.

There are still an estimated 33 million households without electricity and Modi wants them all to have power by the end of the year.

A meter was installed in the Bhoirs' home last month after the Maharashtra state government completed its 250-million-rupee ($3.8-million) electrification project for the island.

"It's been 70 years since India's independence and we've been promised electricity for so long. I'm just glad to see it before I die," says 69-year-old Bhagwan Tali.

Elephanta, also known as Gharapuri, meaning "the city of caves" is a world away from Mumbai. Monkeys outnumber humans and there are no cars on the island, just a miniature railway.

The only shops are stalls selling snacks and trinkets for tourists.

"My business is weak as most cold drinks, ice creams and chocolates can't be sold," says 52-year-old shopkeeper Surekha Bhagat, eagerly waiting for her stall to be hooked up to the grid.

Elephanta has one school -- for children under 16 -- and there is no hospital, leaving the elderly and sick vulnerable during a medical emergency.

Every week, Tulsa Bhoir makes the one-hour boat trip to Mumbai to buy fresh vegetables, milk and other foodstuffs. The 43-year-old hopes electricity will spur infrastructure.

"I'm excited to see how our island changes for the better," she tells AFP.

Devendra Fadnavis -- the chief minister of Maharashtra state, of which Mumbai is the capital -- has said electricity means there is "tremendous scope for tourism" on Elephanta.

Every day several thousand people visit the island's seven caves, which contain ancient Hindu carvings, but leave before the last boat at 5:30 pm and rarely venture into the villages.

Officials hope electricity will persuade them to spend the night. Some locals -- including Sachin Bhagat, who wants banks and ATMs to open on Elephanta -- are already planning to offer their modest houses as homestays.

"The villagers aren't afraid of change but are embracing it," the 34-year-old says. "We want development so that our lives will become much easier."