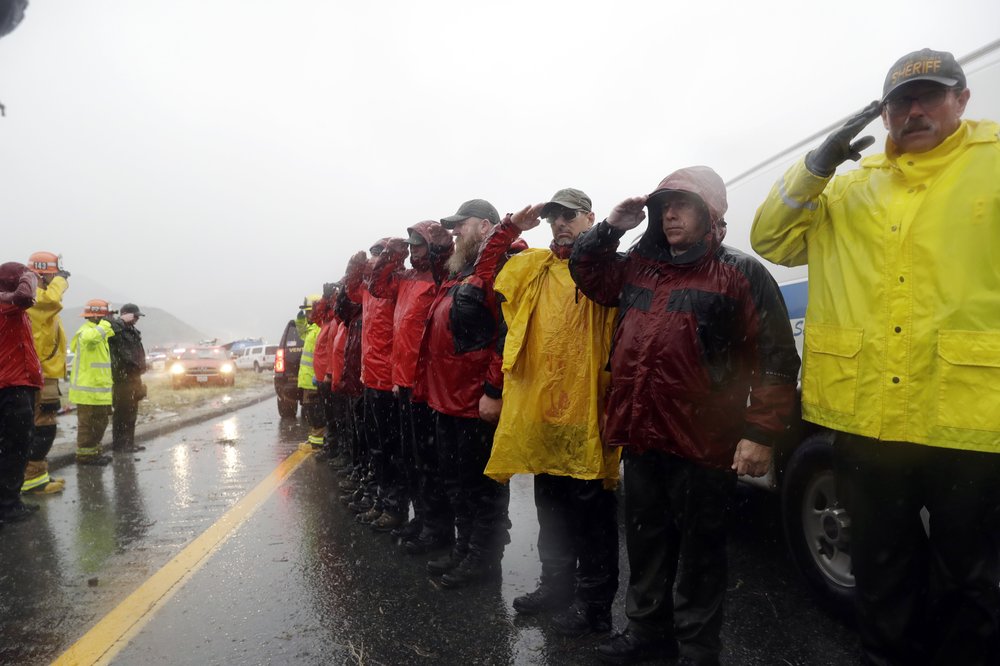 Law enforcement and other emergency personnel salute at the scene of a fatal accident where a volunteer member of the Ventura County search and rescue team was killed along Interstate Highway 5 south of Pyramid Lake, Calif. Saturday, Feb. 2, 2019. The second in a string of powerful storms is battering California, bringing down trees, flooding roadways and prompting evacuations in wildfire burn areas where intense downpours could loosen bare hillsides and cause mudslides. (Photo: AP)

The second in a string of powerful storms battered California on Saturday, shutting key highways after water and mud rushed into lanes from bare hillsides in wildfire burn areas where thousands of residents were under evacuation orders.

Flash flood warnings were issued for huge swaths of Southern California and forecasters said the system brought more than 4 inches (10 centimeters) of rain at lower elevations and several feet of snow in the mountains, where whiteout conditions closed roads.

A wind gust in Santa Barbara County topped 80 mph (128 kph) as the storm moved south and at one point dropped more than a half-inch (1.27 centimeters) of rain in five minutes. Trees and power lines were down across the region.

In Malibu, where the Woolsey fire last year destroyed homes and burned hillsides bare, officials closed Pacific Coast Highway and many other roadways after mud carried trees and rocks into lanes. Residents whose homes survived the flames barricaded their properties with sandbags to protect their properties from floodwaters.

Carol Cavella was evacuated during the November fire and again Saturday when the creek behind her house threatened to overflow and inundate her backyard.

The 86-year-old put her cat in the car and drove to a coffee shop on higher ground, her son-in-law, Warren Bowman said.

“She does not scare easily, but she got a little scared watching that water rise,” Bowman said. He was trying to convince her to come to his house in Los Angeles but she said she’d rather wait to see if the waters recede and she can return home.

The California Department of Transportation said Saturday night in a tweet that the both the northbound southbound lanes of U.S. 101, a vital route between Los Angeles and points north and west, have been reopened. Earlier Saturday, in the Montecito area of Santa Barbara County, several miles of U.S 101 were closed because of flooding.

Elsewhere in the county, evacuations were ordered or recommended for neighborhoods near the Thomas, Whittier and Sherpa fire scars.

“This is a dangerous situation,” the National Weather Service said, warning that the high rates of rain could send boulders sluicing down denuded hillsides along with the mud and debris.

It has only been a little over a year since a downpour on the huge Thomas Fire burn scar unleashed a massive debris flow that destroyed or damaged hundreds of homes in the seaside community of Montecito. The disaster killed 21 people, and two others have never been found.

“Turn around. Driving through is going to be a costly error in judgment,” he said. “It’s just not worth it.”

Multiple accidents were reported on slick highways, including a crash on Interstate 5 that killed a volunteer member of a sheriff’s search and rescue team, and injured several others.

The team from Ventura County was on its way to a training exercise when members stopped to help at the scene of a single-vehicle rollover crash.

A minivan carrying a family was traveling too fast for the wet conditions, lost control and plowed into members of the team, Los Angeles County fire Capt. Tony Imbrenda said. Nine people were transported to hospitals, including three members of the team. The victim, Jeff Dye, was a volunteer with the Fillmore Mountain Search and Rescue Team, the sheriff’s department said.

“This is a very unfortunate situation that could’ve been avoided,” Imbrenda said, warning motorists to slow down in the rain.

In the Holy Jim fire area southeast of Los Angeles, where an August blaze scoured tens of thousands of acres in the Cleveland National Forest, volunteers using heavy equipment removed debris and deepened a creek bed to help prevent flooding.

The National Park Service warned visitors to Yosemite National Park of possible road closures and advised drivers to bring tire chains in the event of snow or icy conditions.

Winter storm warnings were in place for the Sierra Nevada along with avalanche warnings on the Nevada side of the range. The Sierra is already loaded with snow from a series of storms in January. The weather service said areas could see accumulations of up to 10 feet (3 meters) over the next few days.

The weather service lifted flash-flood watches for areas burned by the Mendocino Complex, Camp and Carr wildfires in Northern California. About an inch (2.5 centimeters) of rain was recorded in the San Francisco Bay Area before the storm moved south early Saturday.

A weaker storm soaked much of the state on Thursday Two cold weather systems will follow on Sunday and Monday, bringing additional widespread showers and snow, forecasters said.