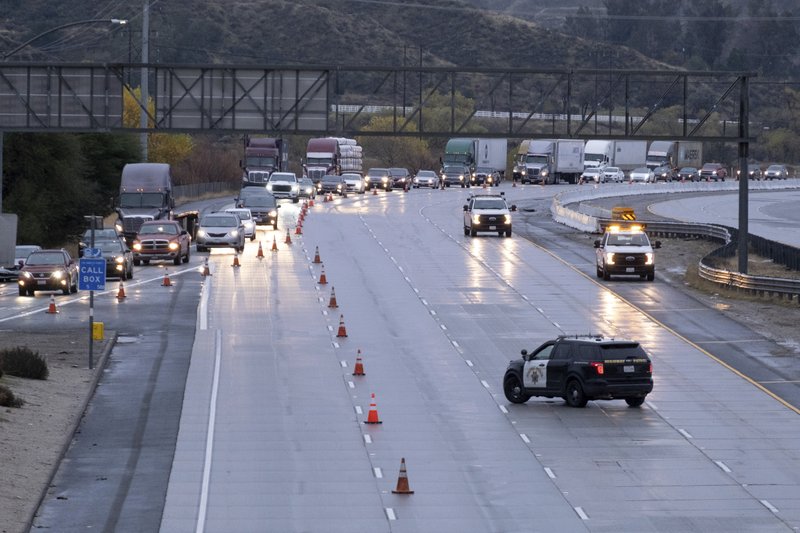 Snow shut down vital Interstate 5 in Tejon Pass through the mountains north of Los Angeles and stopped traffic on Interstate 15 over Cajon Pass in the inland region to the east. I-15 finally reopened in both directions in the afternoon but then authorities later shut down about 45 miles (73 km) of the freeway from Baker, California, to Primm, Nevada, on the way to Las Vegas because of snow and ice.

A truck driver was found unresponsive in a rig stopped along I-5 in Tejon Pass. Kern County firefighters pronounced him dead, according to the California Highway Patrol’s online incident log.

It was not immediately known if the death was weather-related.

After being stuck for five hours in Cajon Pass, motorist Johnny Lim wasn’t sure he could reach Las Vegas, where he hoped to spend time after Christmas. He worried about driving his car through the pass when it reopens.

“The freeway is full of snow and ice,” he said, adding that his car “is not built for conditions like this.”

I-5 rises to more than 4,100 feet (1,250 meters) in Tejon Pass between Los Angeles and the San Joaquin Valley. Cajon Pass rises to more than 3,700 feet (1,128 meters) between the San Gabriel and San Bernardino Mountains on I-15, the major connector between Southern California and Las Vegas.Snow also stopped or slowed traffic on other California roads, including heavily traveled Interstate 8 in eastern San Diego County, and numerous trees were toppled.

The storm began unleashing waves of pounding rain in the region on Christmas Day and continued into Thursday.

On Wednesday night, a small tornado briefly hopped across Ventura Harbor, the National Weather Service reported. Gusts downed five trees, according to the Ventura County Star. Winds up to 65 to 85 mph (105 kph to 137 kph) also caused minor damage to nearby buildings, forecasters said.

The town of Wrightwood at the eastern end of the San Gabriel Mountains had received 25 inches (63.5 centimeters) of snow by midday.

Famed Palomar Observatory in the San Diego County mountains said it would be closed at least through the weekend because of heavy snowfall.