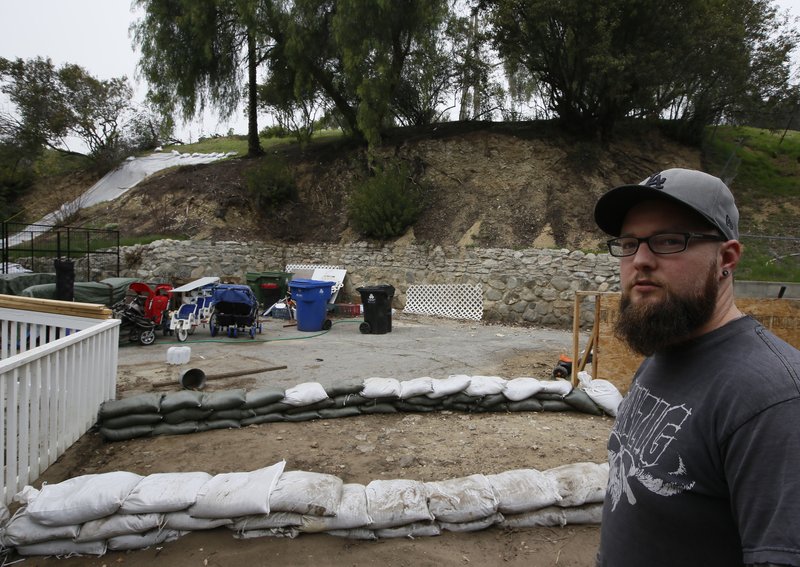 Authorities ordered tens of thousands of people to flee their homes as a powerful storm headed toward California, where many communities on Tuesday face the threat of flooding and destructive debris flows from areas burned bare by huge wildfires.

An atmospheric river — a huge plume of subtropical moisture — took aim at the state’s central and southern coast, where the wealthy community of Montecito near Santa Barbara is still trying to recover from a January storm that unleashed mudslides from a vast burn area, swamping homes and killing 21 people.

The storm was expected to arrive during the night and last through Thursday, bringing 2 to 5 inches (5 to 13 centimeters) of rain to coastal areas and valleys, and 5 to 10 inches (13 to 25 centimeters) in foothills and mountains, the National Weather Service said.

Authorities told as many as 30,000 people to leave communities on the south coast of Santa Barbara County, where mudslides from a Jan. 9 deluge destroyed or damaged hundreds of homes in Montecito, killed 21 people and left two children missing. Authorities also ordered evacuations in parts of neighboring Ventura County.

Many residents of both counties have faced repeated evacuations or advisories since December, when a wind-driven fire grew into the largest in recorded state history. It scorched more than 440 square miles (1,140 square kilometers), destroyed 1,063 buildings and damaged 280 others.

That blaze and previous fires dating to mid-2016 set up the potential for extreme danger from storms.

Montecito resident Molly Rosecrance said she now keeps emergency rations and clothing in the trunk of her car.

“I’m tired of moving it,” she told Santa Barbara news station KEYT-TV on Monday. “So if there is anything that comes down of any consequence, I might be out of my house for two weeks. I have groceries in the car to take to a friend’s house and clothes.”

The National Weather Service said forecasting models of the atmospheric river indicated the first 24 to 36 hours of the storm would target southern Santa Barbara County, western Ventura County and farther up the coast in San Luis Obispo County.

No evacuations were ordered elsewhere, but with burn scars scattered statewide, authorities urged people to be prepared for the storm and made sandbags available. Away from the coast, flash flood watches were to go into effect Wednesday for areas of the Sierra Nevada and mountains in the interior of Southern California.

Along with the hazards, the storm had the potential to help boost water supplies in the central coast region, where drought conditions have recently gone back to extreme or severe levels.

In the Sierra, where snowpack is a key portion of the state’s water supply, US Drought Monitor classifications range from abnormally dry to moderate drought. The most recent state measurement of the snowpack found its water content 39 percent of normal early this month, before storms brought blizzard conditions and even avalanche danger.