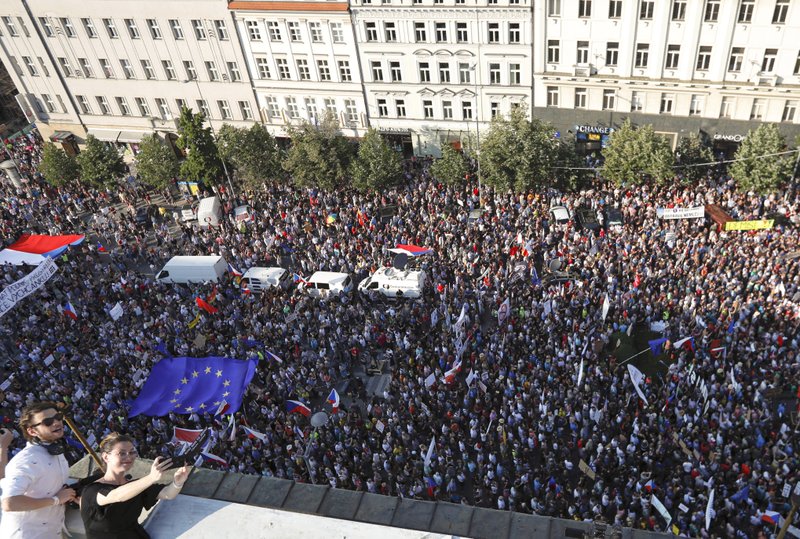 Prague won’t have seen anything like this since the protests of 1989 which brought down the communist regime in what was then Czechoslovakia.

Some 400,000 have signed a petition calling on Czech Prime Minister Andrej Babis to step down over fraud allegations and subsidies paid to his former companies. And hundreds of thousands are expected at a rally in Prague on Sunday to urge the populist billionaire to stand down.

The businessman turned populist politician is standing firm, though and points to record low unemployment rate.

“The Czech Republic is doing well,” Babis recently said. “We are the best in the region and the entire Europe. If you want to invest, it’s the best place (to do it), it’s a place for the future.”

The protest at Letna Park is set to be the biggest demonstration against the government since 1989′s Velvet Revolution and concludes a wave of rallies across the country.

“It’s interesting but also it’s a shame that our political situation is in such a state that something like this has to happen,” Benjamin Roll, a member of the student group behind the protest — Million Moments for Democracy — told The Associated Press.

“On the other hand, I’m glad that we are succeeding in mobilizing the civil society and that I see is the most important task of our group,” the 24-year student of protestant theology said.

Opposition to Babis has been fueled recently by the appointment of a new justice minister at a time when prosecutors have to decide whether to indict Babis over alleged fraud involving European Union funds.

The protesters fear the minister might undermine the independence of the country’s legal system, in the way it has been in some other countries in Central and Eastern Europe, such is Poland. The minister, Marie Benesova, is a close ally of Babis and has voted against a police request to strip Babis of parliamentary immunity to face investigation.

“The opponents of Babis are certain that he’s a threat for democracy,” Josef Mlejnek, an analyst from Prague’s Charles University told The Associated Press.

A preliminary European Union report leaked in May concluded that Babis might face a conflict of interest over EU subsidies involving his former business empire.

Babis denies any wrongdoing and has attacked the EU for trying to destabilize the Czech Republic.

Babis is also facing allegations he collaborated with the secret police during the pre-1989 days and criticism of his power-sharing deal with the Communist Party.

It’s not the first time that Babis has been on the defensive. After all, he was fired as finance minister in 2017 over unexplained business dealings. At the time, the lower house of parliament approved a resolution alleging that Babis had “repeatedly lied” to the public and “misused his media” empire to damage his opponents.

Like other populist leaders around the world, the scandals do not appear to have damaged Babis electorally. His centrist ANO (YES) movement won a landslide in the 2017 parliamentary elections — part of the anti-establishment wave that swept through Western democracies at the time.

His popularity has shown few signs of being dented since. Babis’ group won the European Parliament elections in the Czech Republic in May.

“People have experienced that their economic situation is getting better, and those belong to the supporters of the ANO movement, mostly the pensioners from small towns,” Mlejnek said.

Mlejnek said the protests are a sign of long-term divisions in Czech society.

“Those who protest are mostly supporters of the democratic opposition parties,” Mlejnek said. “And the other part of the society ignores (the protests) or is critical of them.”

What happens next is unclear.

“If Andrej Babis retains his popular support, he will be in a position not to give in,” Mlejnek said.