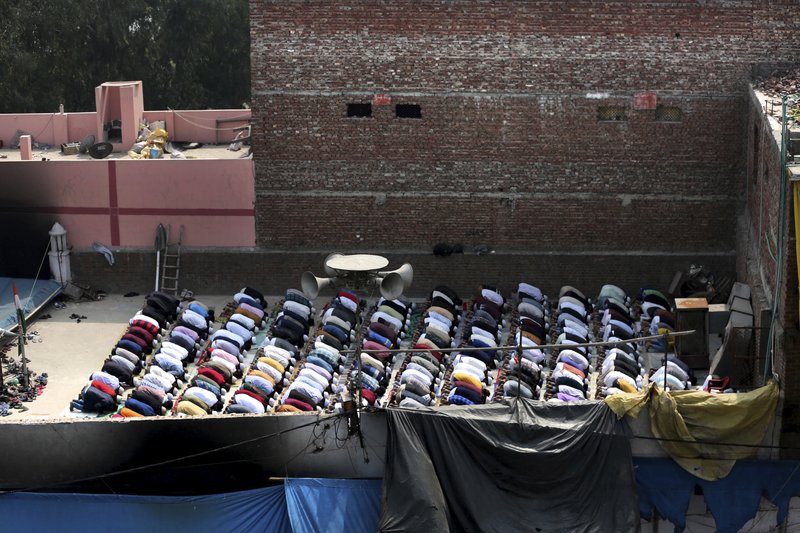 Muslims in a northeastern neighborhood of India’s capital returned for weekly prayers at fire-bombed mosques on Friday, two days after a 72-hour clash between Hindus and Muslims that left at least 40 dead and hundreds injured.

Five days after the riots started, authorities have not said what sparked the worst communal violence in New Delhi in decades. Hospitals were still trying to identify the dead as the toll continued to rise, and residents of the areas affected by the riots were still seeking loved ones.

“If they burn our mosques, we will rebuild them again and pray. It’s our religious right and nobody can stop us from practicing our religion,” said Mohammad Sulaiman, who was among about 180 men who prayed on the rooftop of a mosque that was set on fire in the unrest.

Tensions between Hindu hard-liners and Muslims protesting the Hindu-first policies of Prime Minister Narendra Modi’s government had been building for months when the violence exploded Sunday night, on the eve of US President Donald Trump’s first state visit to India.

Kapil Mishra, a local leader of Modi’s Bharatiya Janata Party who lost his Delhi state assembly seat in recent elections, demanded at a rally Sunday that police shut down a Muslim-led protest in the city or else he and his followers would do it themselves.

And it appears they did.

Hindus and Muslims attacked each other with guns and swords, metal rods and axes, leaving the streets where the rioting occurred resembling a war zone.

Al-Hind hospital, a small clinic with two doctors, was the nearest medical facility for many of the victims. When the riots broke out, it turned into a chaotic emergency ward, its doctors dealing for the first time with injuries such as gunshot wounds, crushed skulls, stabbings and torn genitals.

“It was horrific, as if evil had pervaded and housed itself in the hearts of the mob,” said M.A. Anwar, the doctor on duty,

Religious tensions in the area where the clashes occurred still simmered on Friday, tempered by a heavy police presence. On one riot-torn street, Hindus shouted “Jai Shri Ram,” or Long Live Ram, the Hindu god, as Muslims attempted to reach a mosque damaged in the riots.

Several Muslim residents told The Associated Press that most Muslim families had locked their homes and fled the area.

The passage of a citizenship law in December that fast-tracks naturalization for some religious minorities from neighboring countries but not Muslims earlier spurred massive protests across India that left 23 dead.

The protest violence is the latest in a long line of periodic communal clashes that date to the British partition of the Indian subcontinent in 1947, when the country was split into secular, Hindu-majority India and the Islamic state of Pakistan.

The protection of India’s religious, cultural and linguistic diversity is enshrined in its constitution. But communal tensions have occasionally flared into deadly riots, beginning with partition itself, when Hindus living in what is now Pakistan migrated to India, and Muslims in modern India to Pakistan.

Clashes claimed hundreds of thousands of lives, including Hindus, Muslims, Sikhs and people of other religions.

This week’s death toll marked the worst religiously motivated violence in New Delhi since 1984, when Prime Minister Indira Gandhi was killed by her Sikh bodyguards, triggering a wave of riots that resulted in the deaths of more than 3,000 Sikhs in the capital and more than 8,000 nationwide.

In 1992, tens of thousands of Hindu extremists razed a 16th-century mosque in northern India, claiming that it stood on Ram’s birthplace. Nearly 2,000 people were killed across the country in the riots that followed.

In 2002, the western Indian state of Gujarat erupted in violence when a train filled with Hindu pilgrims was attacked by a Muslim mob. A fire erupted — it remains unclear whether it was arson — and 60 Hindus burned to death. In retaliation, more than 1,000 people, mostly Muslims, were killed in the state.

Modi was Gujarat’s chief minister at the time. He was accused of tacit support for the rampage against Muslims, but a court ultimately cleared him of wrongdoing.

Violent large-scale clashes between Hindus and Muslims last took place in New Delhi in 2014, months after Modi’s party came to power, in a largely poor neighborhood close to where this week’s rioting occurred. That violence left three dozen people injured.

Ashutosh Varshney, a professor at Brown University who wrote a book about Indian riots, said the worst has been averted — at least for now.

“If it had reached the scale of Delhi 1984 or Gujarat 2002, it would have doomed Indian politics for many years to come and brought India closer to the kind of Hindu-Muslim polarization that the current ruling party would ideally want, but is finding it hard to manufacture,” Varshney said.

BJP leaders, who have sought to demonize Muslim protesters as a threat to India, may see some gain from the violence, Varshney said.

But it comes at a cost, the international perception that India under Modi has become ungovernable, he said.

“These are factually inaccurate and misleading, and appear to be aimed at politicizing the issue,” he said. “Our law enforcement agencies are working on the ground to prevent violence and ensure restoration of confidence and normalcy.”

He added that Modi had “publicly appealed for peace and brotherhood.”

“We would urge that irresponsible comments are not mad