Some kneeled, some folded their hands to make silent entreaties. Others sang with their eyes focused on the sky that had gone from blue to yellow and orange, and filled with acrid smoke. 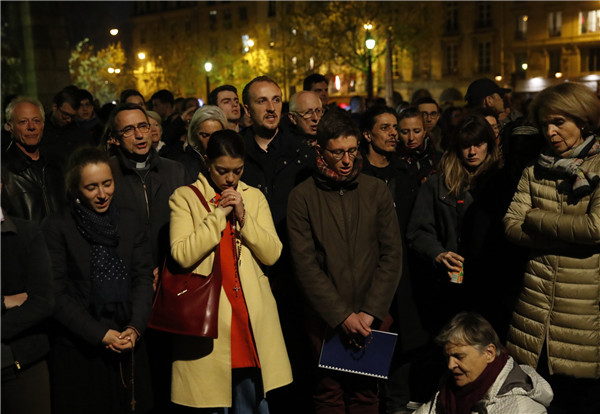 In an impromptu act of togetherness and hope, Parisians and people just visiting France’s charismatic capital came together to pray for Notre Dame as a fire quickly advanced through the cathedral.

The blaze that engulfed Notre Dame brought memories and sorrow to people around the world who had seen or dreamed of seeing the church known for its sculpted gargoyle guards and place in literary history. But emotions might have run highest in the crowd outside another Gothic church, not far from where Notre Dame burned.

In front of the Saint-Julien-des-Pauvres church, a couple hundred people knelt in prayer in the middle of a larger group. More voices joined an unceasing communal hymn sung mostly a cappella, though accompanied at one point by two violins. 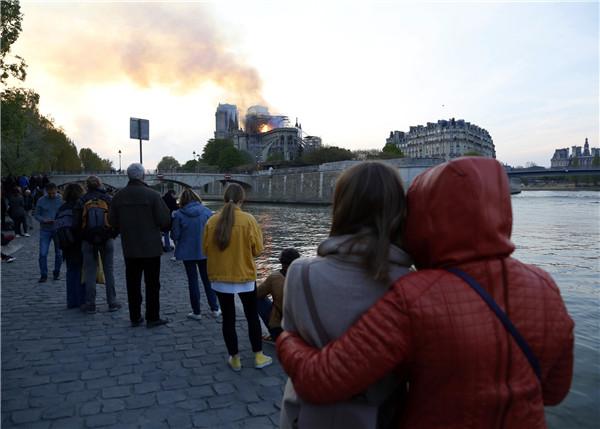 People watch as flames and smoke rise from Notre Dame cathedral as it burns in Paris, Monday, April 15, 2019.

“The cathedral is more than walls. It’s a symbol of Catholic France,” said Paris resident Gaetane Schlienger, 18, who tried to climb a tree near the vigil. “But I have a lot of friends who are not Catholic, and for them it also has a huge impact.”

Schlienger said she comes to Notre Dame nearly every week because gazing at it “you feel in security, in peace. It’s magnificent.”

The cathedral also called to Quentin Salardaine, 25, a doctor from Paris, as flames devoured it and colored the sky.

“I think this building just symbolizes Paris, no matter if you’re Catholic or not. I’m not,” Salardaine said. “I’m just here because I couldn’t stay at my place just knowing that this thing is happening and there are people gathering, singing this religious anthem.”

Elsewhere in Paris, hundreds, and then thousands of people lined the banks of the Seine River around the small island on which Notre Dame stands, watching in disbelief and horror. 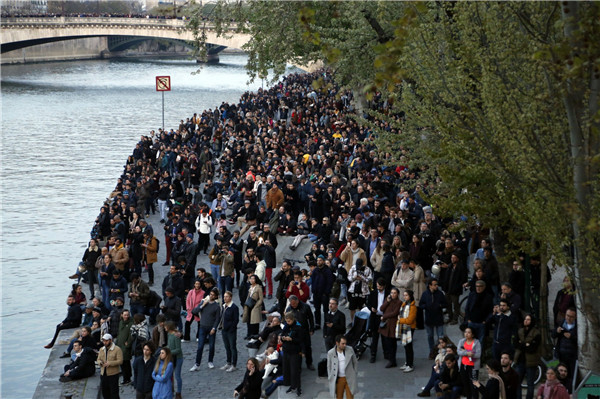 People watch as flames and smoke rise from Notre Dame cathedral as it burns in Paris, Monday, April 15, 2019.

The flames spread along the roof at the back of the structure. The spire burned and fell.

The fire chief in Paris reported crews were struggled to contain the fire, which progressed into the cathedral’s wooden interior and one of the architecturally distinctive towers. Streams of water from fire hoses whipped across the exterior.

Even after firefighters started getting a handle on the blaze, bits of flame could be seen from the Left Bank still licking above exposed walls where the roof used to be. Lights moving past the huge stained-glass windows at the front of Notre Dame appeared to be guiding investigators doing inspections.

Later, an Associated Press reporter got a glimpse inside the cathedral. The only illumination inside the darkened structure came from a glowing red hole in the soaring ceiling. Hours earlier, the spire had risen from that spot into the Paris skyline. Streams of sparks instead spilled onto the floor where the church choir usually stands. Outside Saint-Julien-des-Pauvres, people kept approaching the spontaneous chorus. Blandine Bouret, 68, said she knew the neighborhood well. Her grandfather had a small store on a street in the shadow of Notre Dame. Her father had an engraving boutique nearby.

“It’s terrible, it’s catastrophic. This is the soul of Paris,” Bouret said.

Americans Lucy Soule and her father Win, of Freeport, Maine, felt lucky to have visited Notre Dame an hour before flames engulfed it. Lucy Soule, 22, said it also felt “weird.”

“Now you can smell it burning,” she said of the monument she’d stood in so recently.

Her father said, “I feel sorry for the people tomorrow. They won’t be able to see it.”