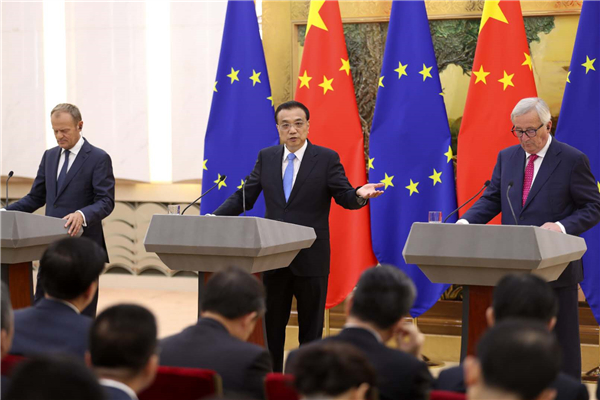 Both parties fully affirmed that the fruitful bilateral meetings were a genuine display of their unified political willingness to beef up an all-around strategic partnership, as well as a blueprint for the forthcoming stage of cooperation.

China and the EU unanimously agreed that strengthening communication and cooperation, upholding multilateralism, constructing an open-end global economy, and other pressing matters are in order for joint efforts.

Referring to China-EU investment agreement negotiation, Premier Li noted that the exchange of the agreement bidding list milestones the substantial progress already attained, showcasing the pragmatic efforts made by both parties in advancing free and convenient trade and investment and their unswerving support for the multilateral trade system. 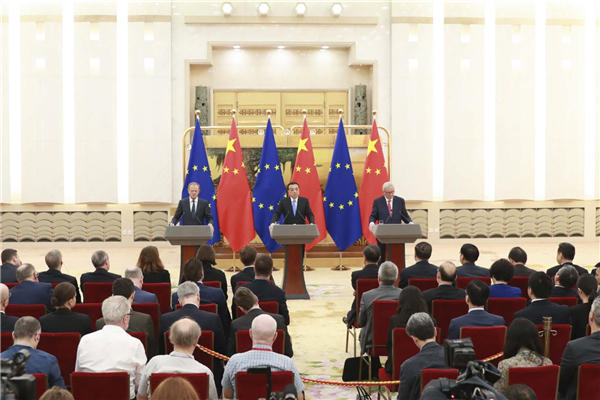 The Premier eyes ultimate consent on issues regarding bilateral trade and investment, with both sides actively pushing forward the progress of negotiations. And the free trade zone motion is expected to go on the agenda, exerting a reassuring force for cooperation between China-EU enterprises, Premier Li said.

The Premier stated that China is willing to engage in a further balanced trade relation with the EU, with tariffs on imports reduced, including automobiles, commodities, and medicine, the negative list for foreign investment shrunk, and market entry threshold lowered. That will usher in a benign business environment for both Chinese and European enterprises on the same footing.

China hopes that European enterprises will make the most of the opportunity, with their market staying open to Chinese ones as well, Premier Li said.

Tusk and Juncker echoed his sentiment and said the EU is delighted to have witnessed China’s rise to become a mainstay of the world. Meanwhile, China-EU ties have been continuously picking up momentum with enormous untapped potential.

The EU is willing to push forward the development of the China-EU strategic partnership and safeguard principled international orders along with China, eyeing more forces pitching in on the process of WTO reform.

The EU deems it laudable that both parties agreed to conduct bidding list exchanges for investment negotiations. And a new string of achievements are within expectation, Tusk and Juncker said.