WORLD Preservation or development? Brazil’s Amazon at a crossroads

Preservation or development? Brazil’s Amazon at a crossroads

Night falls in Brazil’s Amazon and two logging trucks without license plates emerge from the jungle. They rumble over dirt roads that lead away from a national forest, carrying trunks of trees hundreds of years old. 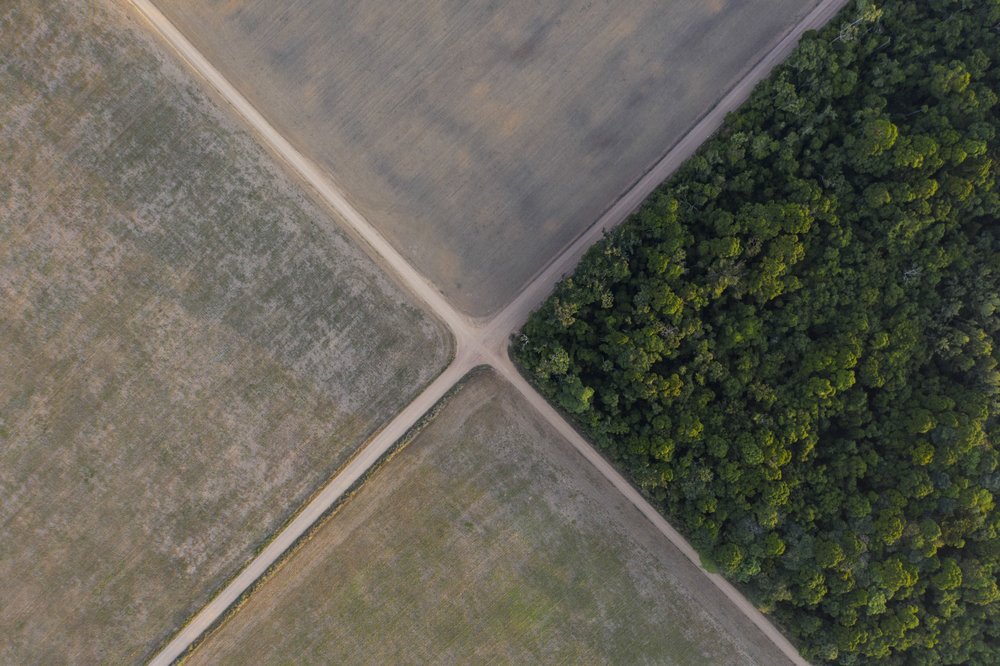 In this Nov. 30, 2019 photo, a fragment of Amazon rainforest stands next to soy fields in Belterra, Para state, Brazil. The Amazon, which has lost about 17% of its original forest, is nearing an irreversible tipping point. In that sense, Brazil itself is at a crossroads. (Photo by AP)

After pulling onto a darkened highway, the truckers chug to their turnoff into the woods, where they deliver their ancient cargo. By morning, the trunks are laid out for hewing at the remote sawmill, its corrugated metal roof hardly visible from the highway.

The highway known as BR-163 stretches from soybean fields to a riverside export terminal. The loggers were just south of the road’s juncture with BR-230, known as the Trans-Amazon. Together the highways cover more than 5,000 miles, crossing the world’s fifth-biggest country in the state of Para.

Carved through jungle during Brazil’s military dictatorship in the 1970s, the roads were built to bend nature to man’s will in the vast hinterland. Four decades later, there’s development taking shape, but also worsening deforestation — and locals harbor concerns that progress may pass them by.

The highways first meet in the city of Ruropolis, where the military government promised land to lure people to the planned agricultural village. One 53-year-old man, Hilquias Soares, remembers a state agent in his hometown yelling, “Who wants to go to Para?”

His family took the chance, arriving just after President Emílio Médici, a general, inaugurated the town. Archival footage shows Médici unveiling a plaque reading: “The Brazilian people respond to the challenge of history, occupying the heart of the Amazon.” Children play on see-saws and show off T-shirts with the crossroads sprawling across the continent-sized nation.

“There was a dream of colonization, of getting land and seeing if here we could have better financial conditions,” Dedé Diniz, 69, said in his home. “A lot of people don’t recognize what we did, what we fought for.”

Diniz examines a photograph he took of Médici and, below it in his album, a shot of a truck trapped in mud. It’s nothing like the bucolic painting on his wall that shows farm furrows and wild forest beside the highway, where a machine repairs ruts.

He jokes that he’ll update the painting with asphalt soon — that stretch should be paved by 2021. Already people have started moving in from other states to buy land for cattle pastures.

Brazil’s President Jair Bolsonaro, a former Army captain, won last year’s election with support from farmers, truckers and miners by resurrecting the dictatorship-era desire to develop the world’s largest tropical rainforest. But he did so at a different stage of human history, one where scientists recognize the Amazon must remain to suck carbon from the air and help arrest climate change. Some also argue the Amazon, which has lost some 20% of its original forest, is nearing an irreversible tipping point. In that sense, Brazil itself is at a crossroads.

From Ruropolis, the Trans-Amazon and BR-163 run jointly westward over a bumpy 70 miles before splitting at a little roundabout. During corn and soy harvests, 2,600 trucks pass through each day to and from the nearby Tapajos River.

There, trucks pull into transshipment ports. Grain cascades from their containers to be loaded onto barges. After a downriver trip that takes days, the grain is poured into ships’ holds and dispatched across the world, largely to China.

That transoceanic network seems far removed from the road warriors filling up on grilled beef or bowls of açai in truck stops. While the truckers eat, grease-stained mechanics replace worn-out shocks and blown-out tires.

At the start of Bolsonaro’s administration, only 32 miles of BR-163 from soy country to the Trans-Amazon remained to be paved. But tropical rains transformed the dirt into impassable mud. Soy trucker Sandro Vieira recalled being stuck in gridlock two years ago, consuming nothing but bread, coffee and peanuts for a week; to this day, the smell of peanuts disgusts him.

A ministry promotional video for foreign investors shows deer and other wild animals in their habitats, living in harmony with highways.

The two highways opened up the rainforest — and viewed from above, the landscape is slashed by jagged stitches of cleared forest on both sides.

Roads themselves aren’t the problem today, according to Paulo Barreto, a forest engineer and researcher at environmental group Imazon.

The issue, he said, is that improved access has been accompanied by Bolsonaro’s rhetoric emboldening illegal loggers while his administration undermines its own environmental regulator.

“If those things continue, deforestation will explode in the area,” Barreto said.

Official data show Amazon deforestation rose almost 30% in the 12 months through July, to its worst level in 11 years. Para state alone accounted for 40% of the loss, with a heat map of incidents running along the Trans-Amazon and BR-163. The Jamanxim national forest, alongside BR-163, had the second most deforestation of any protected area.

Paulo Bezerra, a leader of the Munduruku indigenous people that live around the highways, said in an interview that farmers from Mato Grosso and other states are using tractors to rip down trees near his village, and try to intimidate tribesmen into silence. They say they’re afraid of being killed.

After the global spotlight turned to Brazil in August as the Amazon burned, Bolsonaro dismissed the huge fires as normal practice for clearing pasture and farmland.

What kind of development should Brazil’s government encourage, and how much, are questions being asked at the U.N.’s ongoing climate conference in Madrid.

Environment Minister Ricardo Salles said in an interview in Madrid that people in the Amazon will continue to be drawn into illegal activities if there isn’t economic development.

More soy means more transport. Workers recently spread concrete at one gas station being built near the crossroads, with parking for 760 trucks.

Edeon Ferreira, executive director of soy and corn transport group Pró-Logística, said heavier traffic will add jobs at restaurants and hotels, plus generate demand for mechanics to meet truckers’ needs. He spoke while leading a group of Mato Grosso soy farmers on a 2,900-mile circuit to inspect Amazon roadways.

To support Amazon states, Salles said Brazil aims to shore up foreign funding from the Paris Agreement. But Brazilian officials have yet to detail measures, goals or resources for anti-deforestation efforts.

The clock is ticking. Already the Amazon is growing warmer and drier, losing its capacity to recycle water, and the majority may become savannah in 15 to 30 years, said Carlos Nobre, a climate scientist at the University of Sao Paulo.

Over the past two decades, soy was increasingly planted along the northern part of BR-163. On one side of the highway is the Tapajos national forest, and farmland on the other. Fires burn here and there. In one spot, the breeze carries black ash across the road into the protected area.

“The national forest is a reserve that’s important for the country, for the world,” said Manoel de Souza, 59, who coordinates the Tapajos forest’s federation of traditional communities. “Soy is also important, but it should be ordered so that they aren’t on top of one another, impacting each other.”

Just north of the forest is Belterra, which was jungle throughout João Ferreira’s childhood. Today, his plot is an island of shade and birdsong in the middle of sweeping plantations. He’s known as João of Honey, though none of his 1,000 beehives remain. The bees died off since agribusiness moved in 20 years ago, said João, 59.

He complains that agribusiness did away with native forest, and its efficient machinery creates few jobs, leaving townspeople in the lurch. In an act of lonesome protest, he painted altered versions of the Brazilian flag and hung them over his yard. They feature question marks rather than the national motto “Order and Progress,” because he’s not sure Brazil has them any longer.

“One day progress comes," he said, "and decay arrives with it.”