COLOMBO, March 18 (Xinhua) -- President Gotabaya Rajapaksa has called on Sri Lankans to temporarily halt travel, public gatherings or celebrations as this would enable the government to completely control the spread of the COVID-19 outbreak, the President's Office said in a statement. 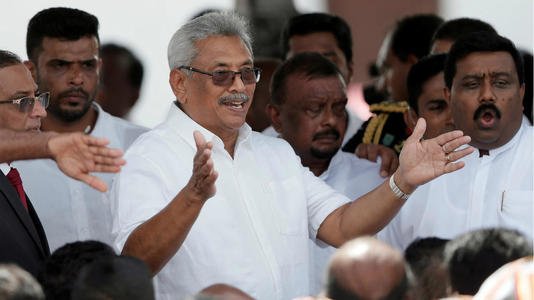 With Sri Lanka recording 43 COVID-19 patients, Rajapaksa said a large number of Sri Lankans had returned back to the country in recent days from virus-hit countries including Italy and authorities had identified all of them as well as their closest relatives and had asked them to be self quarantined in their own homes.

"We have deployed the police, the tri-forces, public health inspectors and local government officers for this purpose and I request that they be given the fullest cooperation," the president was quoted by local media as saying on Wednesday.

He further called on all Sri Lankans who had returned from overseas recently to act responsibly and explained that the government had declared a four-day public holiday to minimize the spread of the virus.

"At this moment, we must minimize all possibilities of this virus from entering and spreading across the country. We have already identified what needs to be done and have put these into action. We have empowered the Task Force accordingly," Rajapaksa said.

"We have faced and won over challenges before. We are ready to face the challenges. What we need is unity. Therefore, I ask from the people to act with responsibility," he added.

With businesses hampered due to the outbreak of the pandemic, President Rajapaksa also unveiled relief packages such as offering lentils and canned fish at subsidized rates, and ordered banks and finance companies to allow a recovery period of six month from the loan facilities taken by businesses.

"We are in the process of planning more relief to the public," the president said.