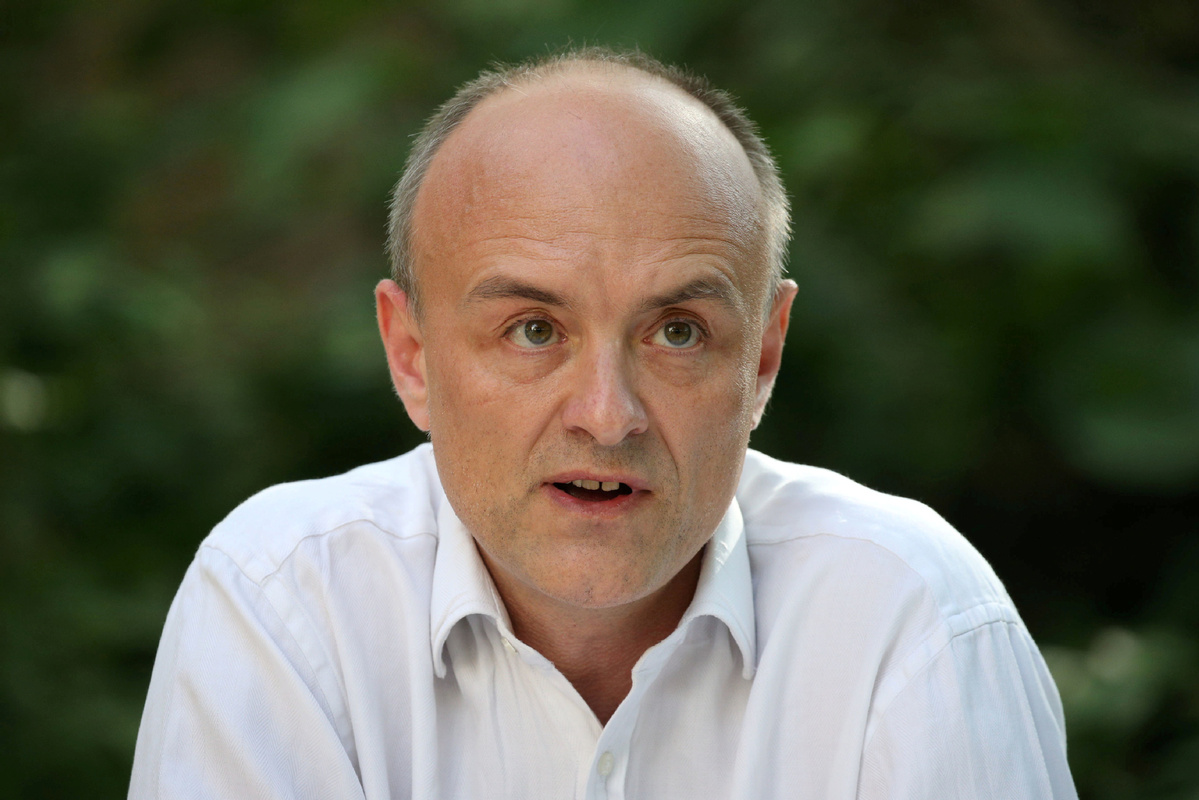 Boris Johnson came under increasing pressure on Tuesday to fire his chief advisor after a scandal that erupted on the weekend over his top aide's apparent flouting of the nation's lockdown rules gathered momentum.

The United Kingdom's prime minister must have hoped his announcement on Monday evening that the novel coronavirus lockdown would be relaxed to ensure that most stores could reopen on June 15 would have dominated Tuesday's front pages.

But the conduct of Dominic Cummings, and Johnson's subsequent defense of him, continued to grab the headlines.

On Tuesday, Douglas Ross, parliamentary undersecretary of state for Scotland, heaped pressure on Johnson by resigning from government because of the issue.

The Evening Standard newspaper quoted Ross as saying: "I have constituents who didn't get to say goodbye to loved ones; families who could not mourn together; people who didn't visit sick relatives because they followed the guidance of the government. I cannot in good faith tell them they were all wrong and one senior adviser to the government was right."

Cummings first came under fire on Saturday morning when it emerged he had driven 420 kilometers at the height of the UK's lockdown to stay on his parents' property in the Northeast of England.

At the time, government rules called for people to remain in their homes, other than to get food or medical supplies, or, in some cases, to work. People had also been told not to undertake long journeys.

On Monday, Cummings said he made the trip because he feared he and his wife were infected with the novel coronavirus and would need help looking after their 4-year-old child.

It was a justification that failed to satisfy most critics.

After listening to Cummings' explanation, Ross wrote on Twitter that he had "trouble" with it.

Around 30 of the government's elected lawmakers are thought to have similar concerns and several have said Johnson's acceptance of Cummings' bending of the rules could undermine the lockdown.

Meanwhile, that lockdown is set to ease further, with all nonessential retailers to reopen on June 15, as long as they follow new written guidelines detailing how they must protect shoppers and employees from the virus and from the COVID-19 respiratory disease it causes.

"Shops now have the time to implement this guidance before they reopen," Johnson said. "This will ensure there can be no doubt about what steps they should take."

Business Secretary Alok Sharma said the reopening of stores "will be a critical step on the road to rebuilding our economy, and will support millions of jobs".

The British Retail Consortium said the announcement offered "much-needed clarity on the route ahead".

Johnson, meanwhile, is scheduled to appear on Wednesday before the powerful Commons Liaison Committee.

It will be the first time he has faced the all-party committee of senior MPs-the only one powerful enough to quiz a serving prime minister-since coming to office in July.

Committee Chairman Bernard Jenkin, an MP from Johnson's ruling Conservative Party, told the BBC members may ask about whether the novel coronavirus crisis has "led to a centralization of power".

He said the prime minister could face questions about other issues related to the pandemic, including scrutiny of COVID-19 deaths in care homes and shortages of personal protective equipment.

The Guardian newspaper added that the lack of personal protective equipment, or PPE, and longer-than-expected waits for novel coronavirus test results mean hospitals will struggle to catch up with the massive backlog of postponed operations and procedures created by the virus fight.

Chris Hopson, chief executive of NHS (National Health Service) Providers, which speaks for all 217 English NHS trusts, told the paper ministers had repeatedly made mistakes that will impact patients.

"We can't restart NHS services as quickly as everyone would like because of the wide range of constraints trusts are facing, including shortages of personal protective equipment and testing," he said. "My concern about reopening the NHS is that people are massively underestimating how difficult and complex it's going to be to restart the full range of services and levels of activity that are needed."

Some 4.2 million people in England are waiting for non-urgent procedures.

At the UK government's news briefing on Tuesday, Health Secretary Matt Hancock faced a barrage of questions about Cummings and his controversial journey.

But he said it is "incredibly important" that we focus on what we must do now.

Hancock also said the NHS has started trials on using a drug that appears to shorten the recovery time of people with COVID-19.He said Remdesivir, an antiviral medicine made by Gilead Sciences, seems to shorten recovery by about four days.

"This is probably the biggest step forward in the treatment of coronavirus since the crisis began," he said.

Hancock said there had been another 134 daily virus deaths, taking the nation's total to 37,048. He also said the latest numbers from the Office for National Statistics show deaths from the virus are at a six-week low.

Elsewhere in Europe, the German state of Thuringia has alarmed the federal government by declaring it will ignore national lockdown rules and make its own.

In France, the government's decision to allow theme parks to reopen while insisting outdoor festivals remain barred has been called incongruous.

But a move by the Spanish government to scrap the two-week quarantine for foreign visitors, starting on July 1, has been welcomed by many in the tourism-dominated nation.

Several airlines and holiday companies have already said they will resume operations accordingly.

Additionally, Denmark has announced it is easing its border controls with other Nordic nations to allow people to meet partners and family members in other countries.

And Germany has said it will revoke its travel warnings pertaining to 31 European countries from June 15 to allow more international travel.