CAPE TOWN, South Africa - Meghan, the wife of Britain's Prince Harry, has tied a ribbon at the site in Cape Town where a student was murdered last month, in a gesture of solidarity with those who have taken a stand against gender-based violence.

Uyinene Mrwetyana was raped and murdered in a Cape Town post office, one of a spate of killings and rapes that has been the catalyst for protests against gender-based violence in South Africa, a country with one of the world's highest murder rates.

About 3,000 women in South Africa were murdered in 2018 - or one every three hours - which is more than five times higher than the global average, the World Health Organization says.

South African women have been wearing black and marching on parliament, the stock exchange and through the streets, with thousands using the hashtag #AmINext to call for reform.

A picture of Meghan tying the yellow ribbon at the site where Mrwetyana was killed was posted on Instagram on Saturday, along with a short text that said she and Harry had "been following what had happened from afar and were both eager to learn more" during their trip to South Africa.

"The Duchess (of Sussex) has taken private visits and meetings over the last two days to deepen her understanding of the current situation and continue to advocate for the rights of women and girls," it said.

Meghan also spoke with the murdered girl's mother, it said. 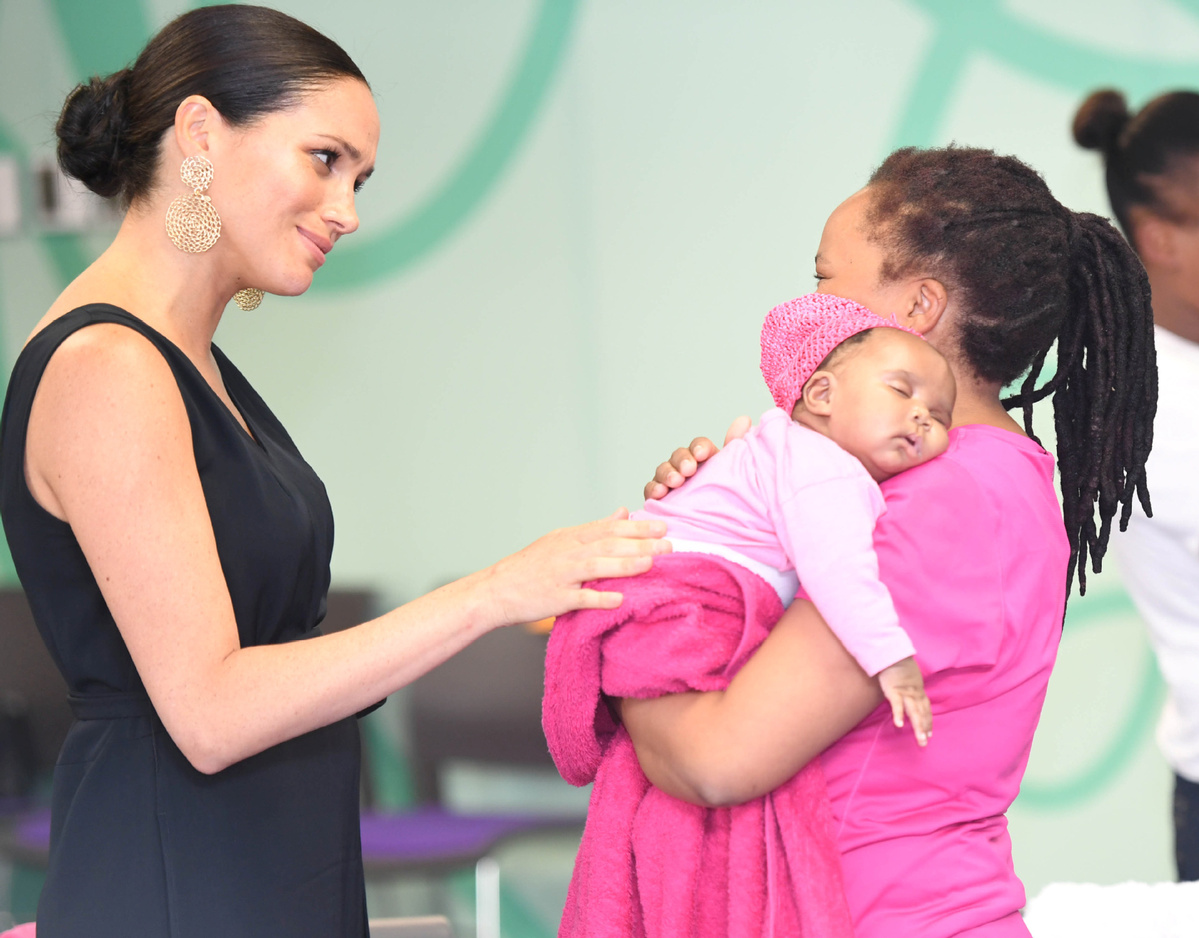 Britain's Meghan, Duchess of Sussex, interacts with a sleeping child during a visit to the mothers2mothers (m2m) charity organisation that trains and employs women living with HIV as frontline health workers across eight African nations and advocates for an HIV-free Africa, in Cape Town, South Africa September 25, 2019. (Photo: Agencies)

President Cyril Ramaphosa this month outlined a five-point emergency plan to tackle gender-based violence, including enhancing the legal and policy framework and ensuring adequate care and support for victims.

Harry, Meghan and their four-month-old son Archie landed in South Africa on Monday for their first overseas tour as a family, which has featured engagements including visits to poor townships and a meeting with Nobel Peace Prize laureate Desmond Tutu.

Harry then travelled alone to Botswana and Angola, where he visited a landmine clearance project that featured in some of the most famous photographs of his late mother, Princess Diana.

On Saturday Harry met Angolan President Joao Lourenco at the presidential palace in Luanda. He was also due to visit a hospital to see the work of a project spearheaded by the first lady, Ana Dias Lourenco.

The project focuses on preventing the transmission of HIV/AIDS from mothers to their babies in a country where high fertility, a young population and lack of awareness are driving infection rates up.

On Sunday the prince will move on to Malawi, where he will visit projects, supported by UK aid and investment funds, centred on young women and girls' education. He will also meet President Peter Mutharika and visit a national park before rejoining Meghan and Archie in South Africa.