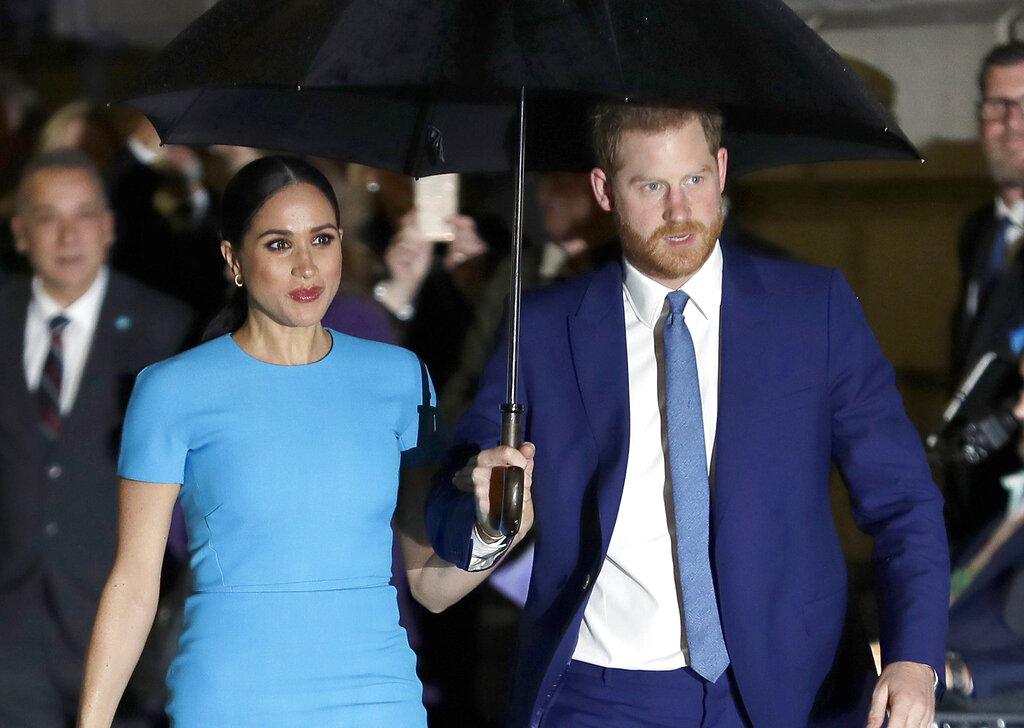 In this March 5, 2020, file photo, Britain's Prince Harry and Meghan, Duchess of Sussex, arrive at the annual Endeavour Fund Awards in London. In an interview with Oprah Winfrey, Prince Harry says the process of separating from royal life has been very difficult for him and his wife, Meghan. The interview special is scheduled to air March 7, 2021, on CBS and the following day in Britain. (File photo: AP)

Prince Harry says the process of separating from royal life has been very difficult for him and his wife, Meghan.

In an interview with Oprah Winfrey, Harry invoked the memory of his late mother, Princess Diana, who had to find her way alone after she and Prince Charles divorced.

“I’m just really relieved and happy to be sitting here talking to you with my wife by my side, because I can’t begin to imagine what it must have been like for her going through this process by herself all those years ago,” Harry said, adding, “because it’s been unbelievably tough for the two of us.”

“But at least we have each other,” Harry said, in a clip from the interview special, which is scheduled to air March 7 on CBS and the following day in Britain. Diana was shown in a photo holding toddler Harry as he made the comments. His mother died in 1997 of injuries suffered in a car crash.

Harry and Meghan sat opposite Winfrey and side-by-side, holding hands during the interview that was conducted in a lush garden setting. Meghan, who recently announced she is pregnant with the couple’s second child, wore an empire-style black dress with embroidery. Harry wore a light gray suit and white dress shirt, minus a tie.

As Meghan Markle, the actor starred in the TV legal drama “Suits.” She married Queen Elizabeth II’s grandson at Windsor Castle in May 2018, and their son, Archie, was born a year later.

The brief promotional clip was one of two of that aired Sunday during CBS’ news magazine “60 Minutes.” Winfrey’s questions and comment were predominant in the other clip, including her statement that, “You said some pretty shocking things here,” without an indication of what she was referring to. Meghan was not heard from in the clips.

Harry and Meghan stepped away from full-time royal life in March 2020, unhappy at media scrutiny and the strictures of their roles. They cited what they described as the intrusions and racist attitudes of the British media toward the duchess, who is African American.

It was agreed the situation would be reviewed after a year. On Friday, Buckingham Palace confirmed that the couple will not be returning to royal duties and Harry will give up his honorary military titles — a decision that makes formal, and final, the couple’s split from the royal family.

The pair, also known as the Duke and Duchess of Sussex, verified “they will not be returning as working members of the Royal Family. “

A spokesperson for the couple hit back at suggestions that Meghan and Harry were not devoted to duty.

“As evidenced by their work over the past year, the Duke and Duchess of Sussex remain committed to their duty and service to the U.K. and around the world, and have offered their continued support to the organizations they have represented regardless of official role,” the spokesperson said in a statement.