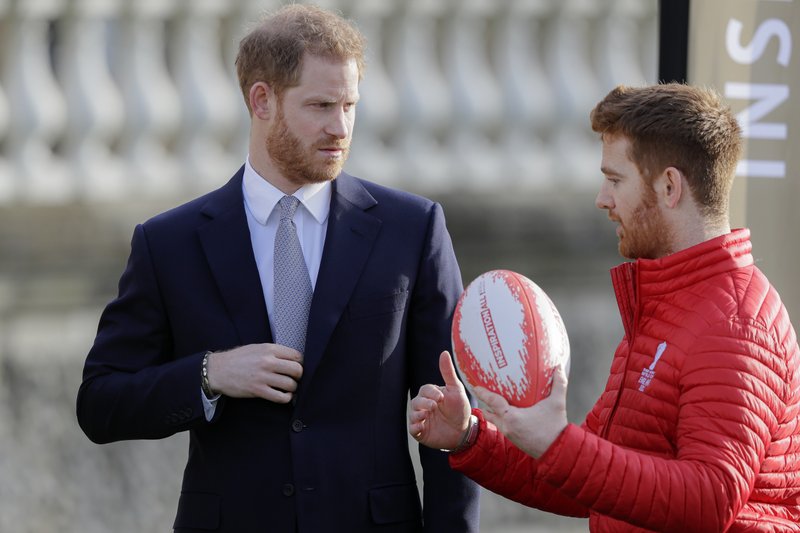 Prince Harry went back to work Thursday, mixing with children playing rugby and offering no hint of the days of turmoil that followed his recent announcement that he wished to step back from royal duties and become financially independent.

It was a fairly standard event for Harry, who watched as children from a local school offer a rugby demonstration on the Buckingham Palace grounds. Though ordinary, it marked the first time Harry had taken on a public engagement since announcing last week that he and his wife Meghan needed a change.

He joked with the kids and shook hands — offering flashes of the beaming smile that has made him one of the most popular members of the House of Windsor. He ignored a journalist’s question about ongoing discussions on his future.

“Look after the grass though, yeah?” he said to the children before retreating into his grandmother’s house. “Otherwise I’ll get in trouble.”

Queen Elizabeth II brokered a deal on Monday that determined there would be “a period of transition″ to sort out the complicated matter of how to be a part-time royal. Meghan and Harry will spend time in both Canada and the U.K. as things are sorted out.

Royal aides are working around the clock to find solutions to the crisis. He is expected to remain in the U.K. into the coming week.

Meghan is already in Canada, where she has carried out visits to charities in Vancouver including Justice For Girls, which campaigns for an end to violence, poverty and racism for teenagers.

In the meantime, Harry released two video statements on causes he has long championed: mental health and the Invictus Games.

In the first video, he introduced a new initiative to champion the importance of mental health for those who play rugby. The initiative aims to combine sport with mental health awareness at a time when suicide is the leading cause of death for men between the ages of 20 and 49 in the U.K.

In footage posted on the Sussexroyal Instagram page, he also launched the next leg of the Invictus Games for wounded service personnel and veterans. The event will be held in Duesseldorf in 2022.

As part of his duties Thursday, the prince also hosted the Rugby League World Cup 2021 draw in the palace’s grand throne room. He spoke about sport having the power to change lives.

“It’s saving lives as well,” Harry said. “So I think for me and ... everybody in this room, whether it’s rugby league, or sports in general ... it needs to be in everybody’s life if possible.”

Harry then pulled the first ball of the draw, which decided the opening game for England’s men’s team. The country picked was Samoa.