WORLD Prisoners escape as IS attack on Afghan jail kills 32

Prisoners escape as IS attack on Afghan jail kills 32 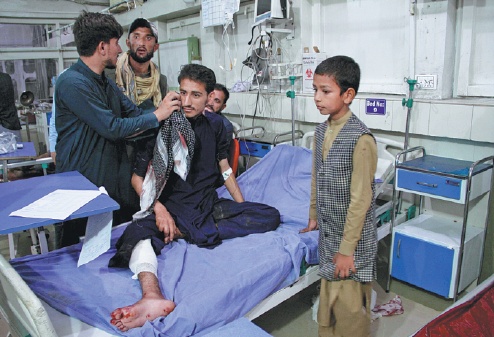 A wounded man receives support in a hospital on Monday after an attack in the city of Jalalabad, east of the Afghan capital Kabul. Islamic State extremists attacked a prison in the city which held hundreds of its members late on Sunday. (Photo: Xinhua)

KABUL, Afghanistan－A gunbattle between Islamic State fighters and Afghan security forces raged at a prison in the eastern city of Jalalabad on Monday, with at least 32 people killed after the militants' overnight assault led to a mass jailbreak.

Another 50 people have been wounded in the attack that began late on Sunday when a suicide bomber slammed his explosive-laden vehicle into the prison entrance.

More assailants opened fire. Three attackers have been killed so far, but the battle continued on Monday morning with sporadic gunfire still coming from the prison grounds, said Attaullah Khogyani, a spokesman for the governor of Nangarhar Province.

Three militants were killed during the initial attack and gunbattle overnight, while at least 29 civilians, prisoners and members of the security forces died in the fighting, Khogyani said.

Police were forced to divert manpower to recapture escaped prisoners amid the chaos, and by noon on Monday around 1,000 had been caught, said Sohrab Qaderi, a lawmaker in the capital of Nangarhar Province, without elaborating on how many were still at large.

Meanwhile, the city was in lockdown. "The whole city of Jalalabad is under curfew, shops are closed," Qaderi said. "Jalalabad is completely empty."

Nearly 130 kilometers east of Kabul, Jalalabad lies on the highway leading to the Khyber Pass and the Pakistani city of Peshawar.

The IS group's affiliate in Afghanistan claimed responsibility for the attack.

The prison housed about 1,500 inmates, of whom nearly 300 were believed to belong to the IS group's affiliate in Afghanistan.

The attack came a day after the Afghan intelligence agency said a senior IS group commander was killed by Afghan special forces near Jalalabad.

While the terror group has seen its so-called caliphate stretching across Iraq and Syria eliminated after a yearslong campaign, the group has continued fighting in Afghanistan. The extremists have also battled the Taliban in the country, whom the United States overthrew following the 2001 US-led invasion after the Sept 11 attacks.

The Taliban's political spokesman, Suhail Shaheen, said his group was not involved in the attack.

The US struck a peace deal with the Taliban in February. And a second, crucial round of negotiations between the Taliban and the political leadership in Kabul has yet to start. Still, Washington and NATO already have begun withdrawing troops in line with the deal.

"We have a cease-fire and are not involved in any of these attacks anywhere in the country," Shaheen said.

The Taliban declared a three-day cease-fire starting on Friday for the major Muslim holiday of Eid al-Adha. The truce expired at 12 am on Monday, though it wasn't immediately clear if it would be extended as the US pushes for an early start to intra-Afghan negotiations that have repeatedly been delayed since Washington signed the peace deal with the Taliban in February.

On Sunday, the Afghan government urged the Taliban to extend the rare truce, as a contentious prisoner swap between the two warring sides edged closer to completion.

Under the deal signed by the Taliban and the US in February, the intra-Afghan peace talks were slated to start in March, but were delayed amid political infighting in Kabul and as an agreed prisoner swap dragged on.

The deal stipulated that Kabul would free around 5,000 Taliban prisoners in return for 1,000 Afghan security personnel held captive by the Taliban.

Afghan President Ashraf Ghani and the Taliban have both indicated that long-delayed peace talks could begin straight after Eid.

"We look forward to it," Sediq Sediqqi, a spokesman for Ghani, said when asked if the authorities were keen on extending the truce.

"We hope the Taliban will not resume violence. The Afghan government's actions and steps taken in the peace process must be reciprocated by the Taliban."